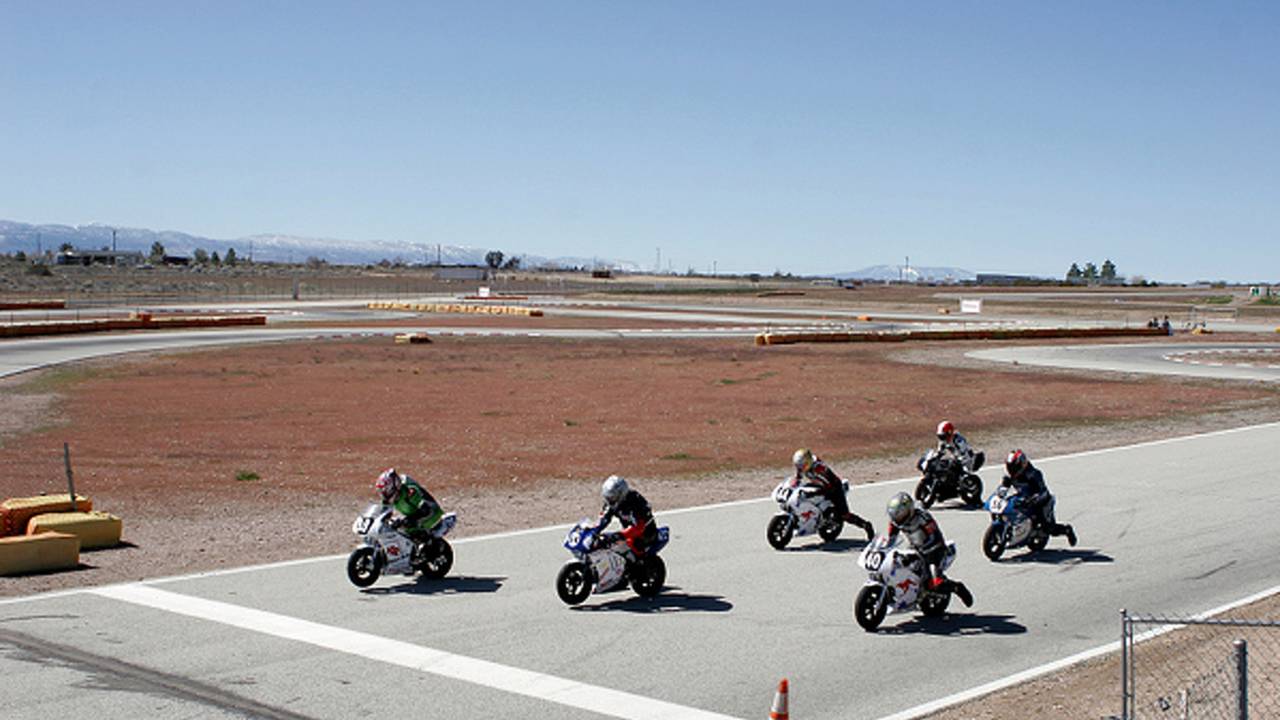 For as long as I can remember, I've wanted to race. The problem has never been fear, nerves or a lack of skill, but money. Racing is insanely expensive. Even running a clapped out SV650 costs a lot more than most young people (I’m 22) can afford. I found my solution last Sunday at Willow Springs with M1GP on an XR100 shod with funky street tires. Even riding a mini-supermoto that I got for fre...

For as long as I can remember, I've wanted to race. The problem has never been fear, nerves or a lack of skill, but money. Racing is insanely expensive. Even running a clapped out SV650 costs a lot more than most young people (I’m 22) can afford. I found my solution last Sunday at Willow Springs with M1GP on an XR100 shod with funky street tires.

Even riding a mini-supermoto that I got for free, the cost of racing is still significant. All said and done, my first race day cost me a little more than $200. Joining M1GP is $80 for the year, the entry fee is $60, transponder rental is $20, an extra class is another $20, gas is $20, and I still had to buy apples and lunch meat. Still, all that is less than the cost of a fresh set of Dunlop slicks.

I'd gone to the pre-season time trials earlier in the month and many of the people racing are my regular riding buddies, so I knew the track and had an idea of what to expect. We arrived at the track at 6:30 am, unloaded the bikes, and walked the frozen track. The weather forecast for the day was a high of 50° and windy. Not ideal, but a week prior to that it said 90 percent chance of rain and 40°; so much for warm and sunny SoCal. Once everyone else got there, things started to move pretty fast.

After the 8:30 riders meeting was a cold and slick morning practice. I suited up, checked my tire pressures, and warmed up the bike while I waited through the first two races. After race two was over, we rolled out onto the track and did our warm-up lap. I was directed into my spot in the grid, clicked my shield down, put the bike in gear, and waited for the starter. I've gone pretty fast before, both on the track and on the street. Riding at the limit was nothing new for me, but waiting on the start line to drag race everyone to turn one was new, and it was pretty damn exciting.

The starter held up the 2 board and I got into launch position and brought the revs up, then the 1 board, then sideways, and finally, he dropped the board, and waved the green flag. I beat the other two guys running my class (on NSR50s) to turn one, got passed by a kid with a 100 pound weight advantage and fought hard for a few laps for 6th before an accidental downshift stopped me cold and let my friend on the number 4 bike past. My race was done. I'd been blocking him since the first lap and now that he was past, I knew my chattering front end and wheezing motor just didn't have what it took to pass him back. A few short laps later, the race was over and I'd scored points toward a championship.

Back in the pits, I took off my gloves, helmet and back protector. Waiting on the grid, the launch and finally diving into turn one seemed to replay in slow motion, one fluid scene. It was a strange and surreal feeling that stayed with me through the race and for another hour after. It was something like having sex for the first time, but less awkward and more intense. After the intense high wore off, I thought about the race. Looking back on it, I realized that aside from the grid and starting procedure, it felt remarkably similar to riding the canyons with my buddies. The sensation of speed is actually greater in the canyons, but I think it's because of the bike more than anything. My other four races didn't quite match up to the excitement and anticipation of the first, but I get the feeling that it was one of those once-in-a-lifetime experiences. While I may never get quite the same rush again, I think I'll be giving up one Sunday a month and as much money as I can to go racing.