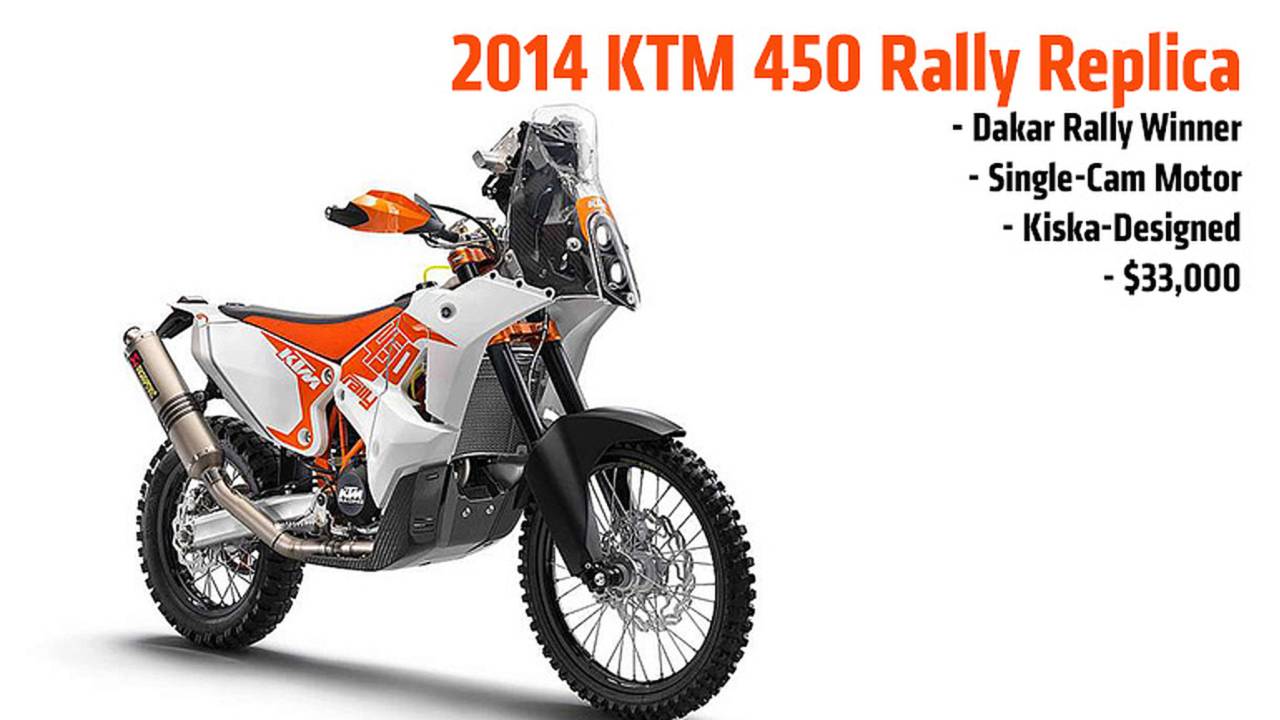 Want to win the Dakar rally? Now you can buy the leading bike, the 2014 KTM 450 Rally Replica.

Fully living up to the brand's "Ready to Race" tagline, this 2014 KTM 450 Rally Replica is an exact copy of the bike Marc Coma rode to victory in this year's Dakar. It can be yours for just $33,000.

"It was expected that the competition would be stronger in the 2014 Dakar Rally," states KTM CEO Stefan Pierer. "We now want to pass on the experience of such a successful time in this year’s Dakar to any rider who wishes to own this fantastic bike, and especially to those who are committed to making their rally dreams come true or realise their Dakar ambition. The racing service we offer for privateers is as fundamentally strong as the service we give to our factory riders and we are very proud of helping many riders achieve their goals in the rally."

Note how slim this bike is; the clear front fairing enables the rider to see the front wheel.

Where the previous 450 Rally was still based on a platform hailing from the 690cc era, this new bike was designed from the ground up to take full advantage of the new, smaller motor. As such, it's said to be considerably slimmer and, with a dry weight of just 308 lbs, considerably more capable over low-speed, technical terrain. Further aiding riders in those conditions is a slim, carbon "tower" at the front supporting the instruments, road book and transponder while still allowing the rider to see the front wheel through the transparent front fairing.

Can you spot the fuel tanks? Two hang down each side of the engine and two live on either side of the tail.

KTM isn't releasing performance specs for the motor, but the 450cc single-cylinder uses a single overhead cam configuration and is fuel-injected. Two fuel tanks are mounted saddle-style at the front and two are incorporated into the tail unit for a total capacity of 8.7 gallons. The rider can switch between front and rear tanks, enabling them to tailor the bike's weight distribution to specific terrain.

On this new 450, KTM targeted rider friendliness in the form of improved ergonomics, slimmer dimensions and new rear suspension.

Suspension is handled by KTM's house brand, WP, and is 48mm USD forks at the front and a monoshock at the rear complete with a newly-designed linkage system.

Putting a fine point on the bike's superiority, 2nd place Dakar finisher Jordi Viladoms hadn't even swung a leg over the bike before this year's race kicked off in Argentina.