Indian Wrecking Crew to Tear up 'Hometown' at X Games

The dominant force that is Indian Motorcycle's flat track team will be tearing it up at the X Games in Minneapolis on 13 July.

Mees, Baker, and Smith to be joined by road racing legend in Minneapolis next month

The new Indian Motorcycle flat track racing Wrecking Crew is getting set to tear up the track next month when the X Games arrives at the brand's "hometown" of Minneapolis.

Yeah, I know; that "hometown" claim is dubious. I mean, Medina, Minnesota, is, like, a half-hour drive from downtown Minneapolis. Probably double that during rush hour. It's in the 763 area code, which is totally a boondocks area code. That's the same area code as Brooklyn Park, where Jesse Ventura was mayor. Well, that's somethin', I guess. Maybe Indian could claim the new Polaris office in Wyoming, Minnesota, as its home. That's at least in the 651 area code – same as St. Paul. Good ol' Pig's Eye. OK, it can't claim fancy folks like Prince and Brother Ali, but St. Paul's got F. Scott Fitzgerald and Charles Schultz.

(Hey, if every other moto-journalist is allowed to yammer on with talk of Southern California, I can show love for the North Star State.)

Anyway, Indian's almost-unbeatable flat track team of Jared Mees, Brad Baker, and Bryan Smith will be in the Mini Apple on 13 July to take part in the X Games. Both Smith and Mees are previous X Games gold medalists, while Baker has two bronze medals to his name. Joining them on the dirt will be veteran road racer Larry Pegram, who most recently raced in World Superbike for EBR. Fire up the BS rumor machine for that one. 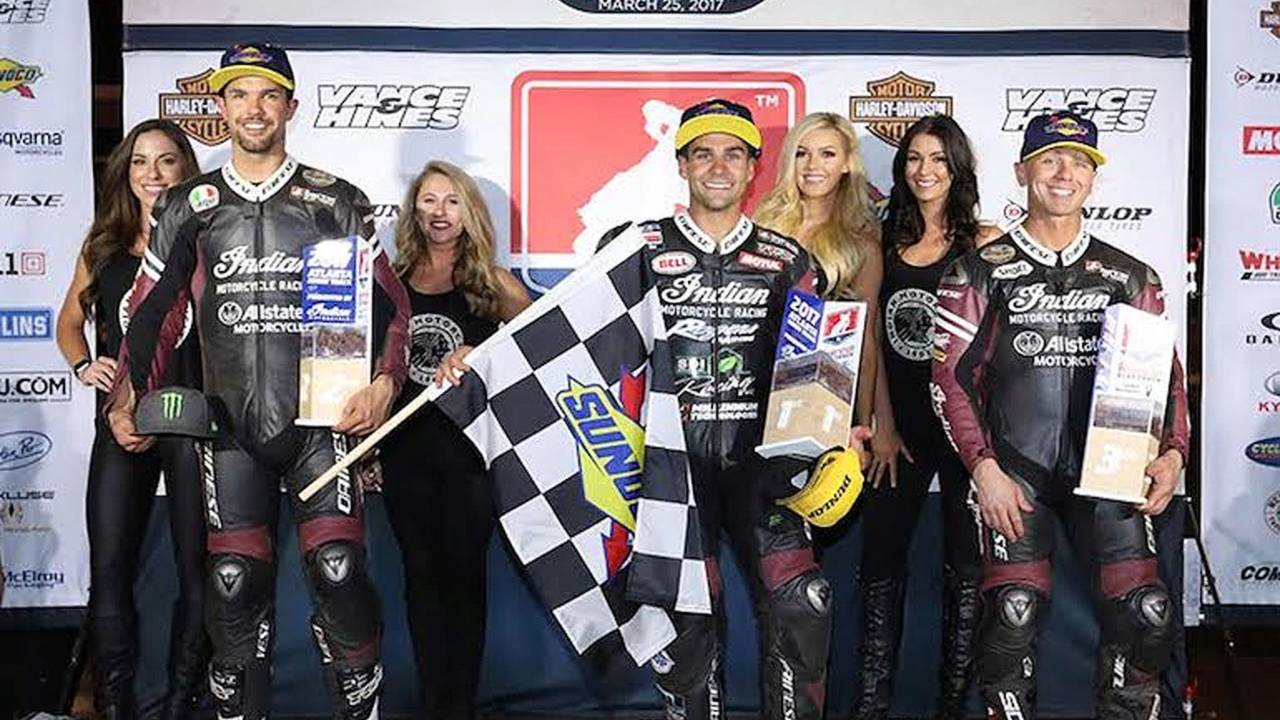 “It’s been an incredible season thus far, vastly exceeding our expectations," said Reid Wilson, Indian Motorcycle Marketing Director. "Having the opportunity to compete in the X Games in front of our hometown is truly special. In addition to being our first time at X Games, this will be the first time we have four Indian Scout FTR750 race bikes in the field, with Larry Pegram joining the Wrecking Crew for this event.”

“There’s no doubt the Indian Scout FTR750 is one of the hottest stories within all of motorsports,"said Pegram. "It’s been exciting to watch Indian Motorcycle Racing’s return, and I’m thrilled to have the opportunity to ride alongside the new Wrecking Crew.”

The new Indian Wrecking Crew currently sits first, second, and third on the American Flat Track leaderboard, and is the only manufacturer to have a rider reach the podium at each of the nine Grand National events this season. Before heading to the X Games the team faces the Rolling Wheels Half-Mile in Upstate New York on July 8.