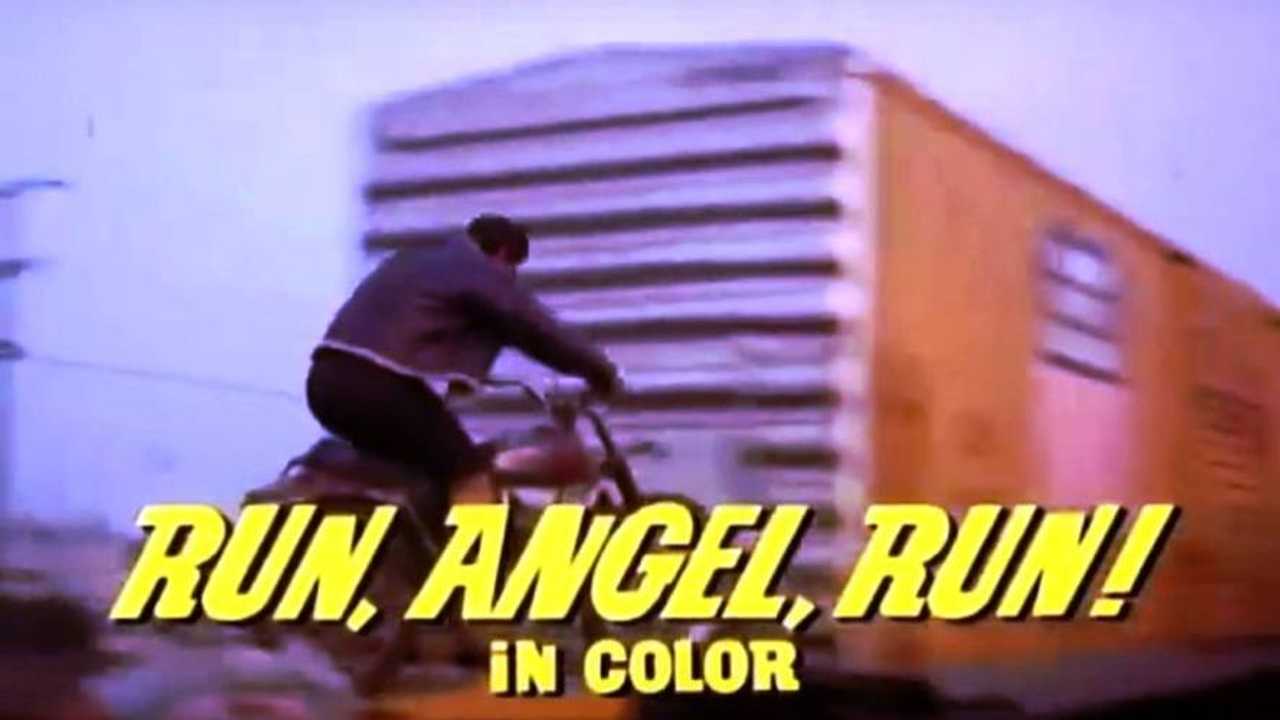 This was the 15th highest grossing movie of 1969, finishing just below Winning and above The Wild Bunch, which shows you what big business B-movies and the drive-in circuit were. That same year, Easy Rider was a surprise hit and third biggest money maker, just ahead of Hello, Dolly! Here's the trailer for Run, Angel, Run!

Run, Angel, Run! is the directorial debut of Jack Starrett, and the first time biker movie staple William Smith plays a biker. You may remember these two from a few weeks ago in The Losers/Nam's Angels, which Jack directed, and does a cameo in, and has William as one of the bikers.

There really is no one else worth mentioning in the movie, except maybe the director's wife, Valerie Starrett, who plays the love interest and went on to be a regular on General Hospital for eight years.

For our younger readers, people used to buy magazines to read about TV

So, for $10,000 (which was enough to start a whole new life back in 1969), Angelo tells a Time/Life-like magazine all the dirty details about the biker gang he is a bigwig in. Proving he doesn't have much to protect with a helmet in that head of his, 1) He doesn't get the money up front; 2) He lets them use his name and publish his face on the cover of the magazine.

In order to avoid being killed by his own gang, or every other biker who can read, Angel has to run. He takes off with his girlfriend Laurie to the rural part of the state to wait for Like magazine to pay him, which is several weeks. While out in the middle of nowhere he meets an old rancher and makes what is probably his first real friend since grade school. Of course, everything starts to go horribly, horribly wrong, even before his gang mates show up.

Angel does try his best to go straight and make a normal life with Laurie, but it just isn't to be. Even before his gang finds him, Laurie is out cruising for kicks and other guys to get some excitement –– not ready to be a farmer's wife.

Angel works on the ranch and befriends the old rancher and his family, but just can't wrap his head around getting up early and working all day for a living. When the gang does show up, they wreck the malt shop and rape the rancher's daughter, and Angel almost welcomes the excitement.

For a movie with a low budget and no real name actors, writers or directors to speak of, they do manage to put a lot up there on screen. After calling everyone nobodies, I actually looked up the writer credited with the story, and oh, wow!, I actually worked with him on a TV show in 1998. He has a long list of TV credits. Well, rest in peace Richard Compton; to your credit this movie has a story twice as good as most biker movies.

Stu Philips, composer of a bunch of biker movie scores does this one, too, and oddly enough Tammy Wynette sings the sappy theme song. I suspect this movie again used real local bikers on their own bikes, because they are convincing and no one looks uncomfortable on the bikes.

Rotten Tomato Rating: None, but the audience score there is at 41 percent.

RideApart Worth Watching: If it is too hot to work on your bike, or ride it, pop a cold one and watch it in an air-conditioned room.

Redeeming Quality: Some of the stunts are seriously dangerous. I have to imagine someone involved in the movie was working on the railroad (all the live long day), because you certainly don't shoot stunts involving a moving train guerilla style, and I doubt they could afford to pay Union Pacific. As seen above, there is a stunt where a bike rides along a train moving at a decent speed, and the passenger jumps in. Perhaps the best stunt is the bike jumping onto a moving flat car, though it does involve the Harley Sportster turning into a Husqvarna motocross bike. You can watch it here, but the quality is pretty lousy (jump to about 2 minutes in).

The scene where Angel gets the old rancher's antique pre-war bike running for him and they go off riding in the fields together perfectly captures what off road riding with your friends should be about. It is refreshing to see, in the middle of this negative depiction of bikers, a few scenes where motorcycles bring two friends together. Riding off road isn't about big air, and sick tricks, it's about riding just to ride with nowhere to go and no other traffic to worry about.

Worth Noting: There are not one, but two implied rapes in this movie, first with some hobos on the train, and then with the bikers with the rancher's daughter. These scenes are tame by today's standards, but the blood curdling scream sounds as real as anything you'll hear.

It is hard to find stills of this movie online, and hard to find good quality video to grab images out of, but Angel has a pretty sweet-looking bike. It appears to be a mildly customized Sportster with a red and white tank that almost matches the Husky they use for the jump scene, but not quite. It is certainly a very ridable bike, and not a huge, overly long chopper thing, and it is certainly a real biker bike, not like the Honda CB350 ridden in some other movies.

Also, this is an integrated gang, with several black members and Latinos as well. These are equal opportunity gang-bangers. Perhaps that is why I found German and Japanese versions of the film? It was a real international hit.