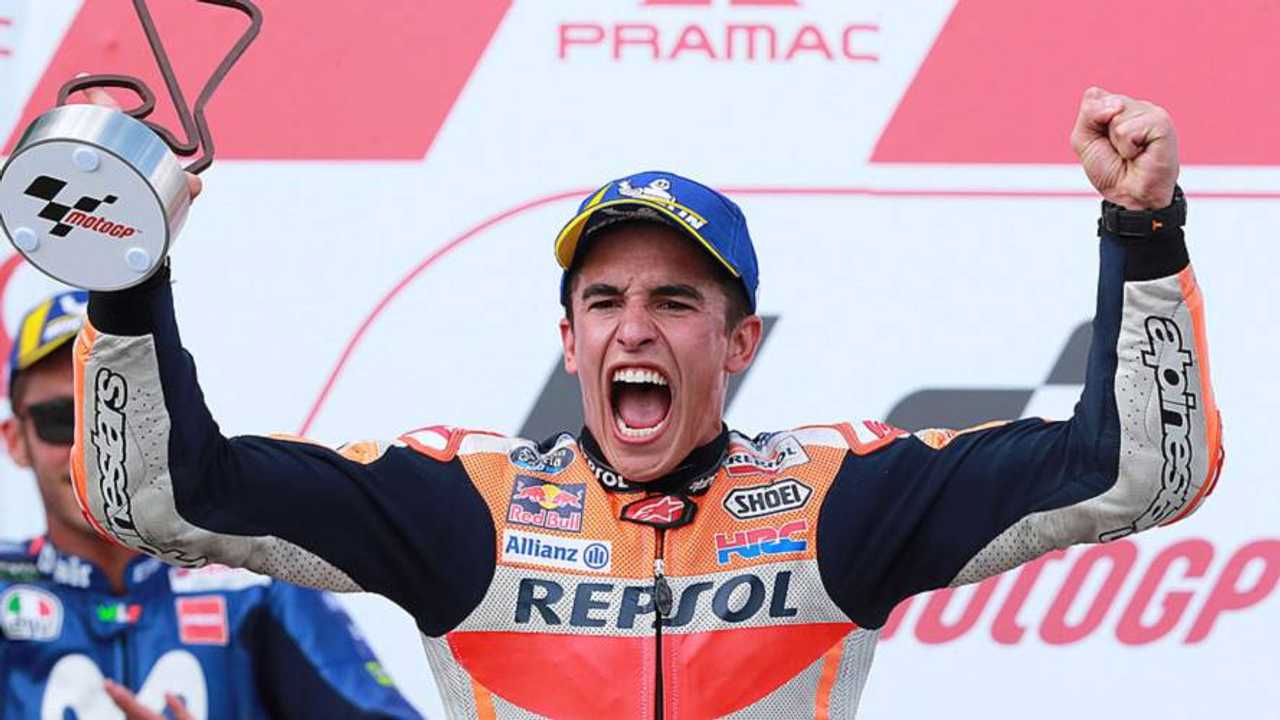 The Spaniard won from pole position at the German venue for the ninth consecutive time and extended his championship lead to 46 points heading into the summer break.

Honda rider Marquez started the race alongside Danilo Petrucci and Jorge Lorenzo, and both Ducati riders had better getaways to take first and second.

Lorenzo led Petrucci, but it took Marquez only four laps to start his recovery as he moved past the Pramac Ducati rider at Turn 1.

He then inched closer Lorenzo and, despite sitting only half a second behind, he spent seven laps before moving within striking distance.

Marquez eventually moved past Lorenzo at the final corner, and immediately pulled away as the Ducati rider had to turn his attention to the charging Rossi.

It took Rossi only three laps to overtake Lorenzo, taking advantage of a mistake from the latter at Turn 10, but Marquez already had a one-second lead by then.

The Italian nearly halved the gap by setting the fastest lap, but Marquez responded by going even faster a lap later and then consistently increased his lead thereafter.

He eventually won by 2.1s from Rossi with Marquez dropping a second on the last lap, with Maverick Vinales completing a double podium finish for Yamaha in third.

Vinales had yet another poor start to the race, running only seventh in the early laps, but passed four Ducatis on his way back to the final podium step.

The final move he made was on Petrucci with two laps remaining, the Pramac Ducati rider having to settle for fourth ahead of Angel Nieto rider Alvaro Bautista, who took his best finish of the season.

Both factory Ducatis struggled to stay competitive in the late stages of the race, with Lorenzo taking sixth ahead of Andrea Dovizioso.

THE RIVALRY: Rossi Claims Marquez has "destroyed our sport"

Dani Pedrosa and Johann Zarco spent the race together in eighth and ninth with the former winning that battle, while Bradley Smith matched his best result on a KTM in 10th.

The Briton's teammate Pol Espargaro was the catalyst of a multi-bike incident at the start, the Spaniard tagging Andrea Iannone and then collecting the other Suzuki of Alex Rins at Turn 2.

Espargaro and Rins retired on the spot with Iannone, as well as Jack Miller, dropping down the order and only finishing 12th and 14th respectively.

Both LCR Hondas of Cal Crutchlow and Takaaki Nakagami crashed, the Briton retiring from fifth on Lap 10 at Turn 12.

KTM wildcard Mika Kallio and Aleix Espargaro both withdrew from the race, the Finn injuring his right knee in FP2 and the Aprilia man suffering a blow to the ribs in Sunday morning warm-up.