That Motorcycle Column - Heroes and Villains 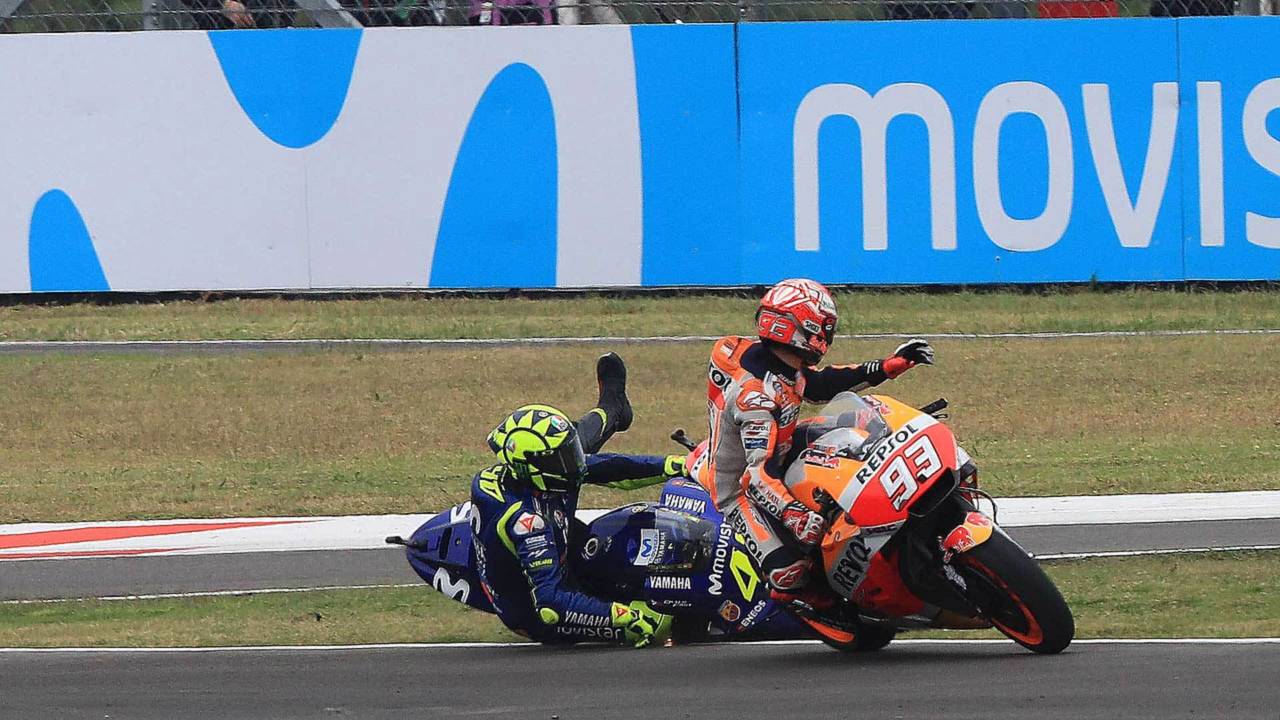 In this week's That Motorcycle Column, Peter takes the time to explain that Rossi rules, Marquez drools, and why hate makes watching MotoGP more fun.

I hate Marc Marquez. Yeah I know, “hate” is a strong word but sometimes it’s a fun word. I don’t mean that really, truly, detest Marquez, or that I won’t break bread with him, or that I wouldn’t give him a ride home on a rainy night. I mean that I merely wish he would do badly in every MotoGP motorcycle race in which he competes from now until the gates of hell are dissolved in a bottomless abyss of sulfuric acid. It’s nothing personal. Well okay, it’s actually totally about 100 percent personal.It’s personal in a good, healthy way though.

If you do not know who Marc Marquez is, well, that’s fine as long as you are willing to hate him too. If you are willing to hate him, I then need to caution you that he does not allow hating him to be an easy thing to do. He is an incredible talent on the road-racing track, doing things on a motorcycle that should not be possible, and doing those things again and again. For instance, when he overrides his Honda MotoGP bike and crashes, he often doesn’t actually crash. More than a few times he has “ridden” his fallen bike back onto its tires and then rode on, as if doing such were perfectly fine and normal. It’s not.

I hate him for being such a great talent. I hate him for making it so painful and perplexing to hate him. Most of all, I hate him because he is regularly beating Valentino Rossi. I hate Marquez because part of the joy of watching MotoGP races, or any sport actually, is the deep emotional involvement you can invest in whoever you are rooting for, and then loathing on opposition. I’ll never be certain which half of that brings me the most joy, and I really don’t care; just let me love and let me hate, and don’t hate on me for hating.

My rider of favor, as I hinted above, is Valentino Rossi. Rossi is the best MotoGP racer ever to sit on a motorcycle. Marquez is much younger than Rossi and he used to dream of one day racing against Rossi. Now I think Rossi hates him too. Marquez has a long way to go to beat any of Rossi’s many records. That’s because Rossi is the best ever.

After every MotoGP race, the Marc Marquez fans and the Valentino Rossi fans get into raging arguments over which of these racers is the greatest of all time (GoAT). These wars of words are often worse than many arguments about current American politics. They are arguments without end because they are all emotional and give very little hay to facts. That is exactly the joy of hate and loathing; all that matters is how you feel.

An added feature of being emotionally involved in motorcycle road racing is that we view it as a sport of individuals (Though it isn’t.). This makes it much more fun than team sports because it provides us with many options for our affections, and a whole field of other riders to hate, rather than just hating on one other team. For instance, I hate the Cowboys (as every right-thinking American should - JM), but if they are not playing the Giants then I don’t really care what they do. I hate the Duke basketball team, but really only while they play Syracuse. Go Orange. Plus, as a friend of mine says, one-ball sports aren’t actually sports anyway; they’re games.

After each MotoGP race I go on Facebook and curse my friend Bob, who is uncomfortably in love with Marquez. While all that I say to defend Rossi is limited to a careful and logical assessment of the evidence (According to me.), all that my friend Bob says in defense of Marc-y Marquez borders on insanity. Bob is simply wrong, and there’s nothing more to say about it, though he continues to say many things about it. Crazy talk; it’s all crazy talk. Marquez stinks.

CHECK OUT: Marquez Wouldn't Do Anything Different in Argentina Fightback

Bob is wrong, I hope you all know that. But right or wrong, I do not hate Bob.