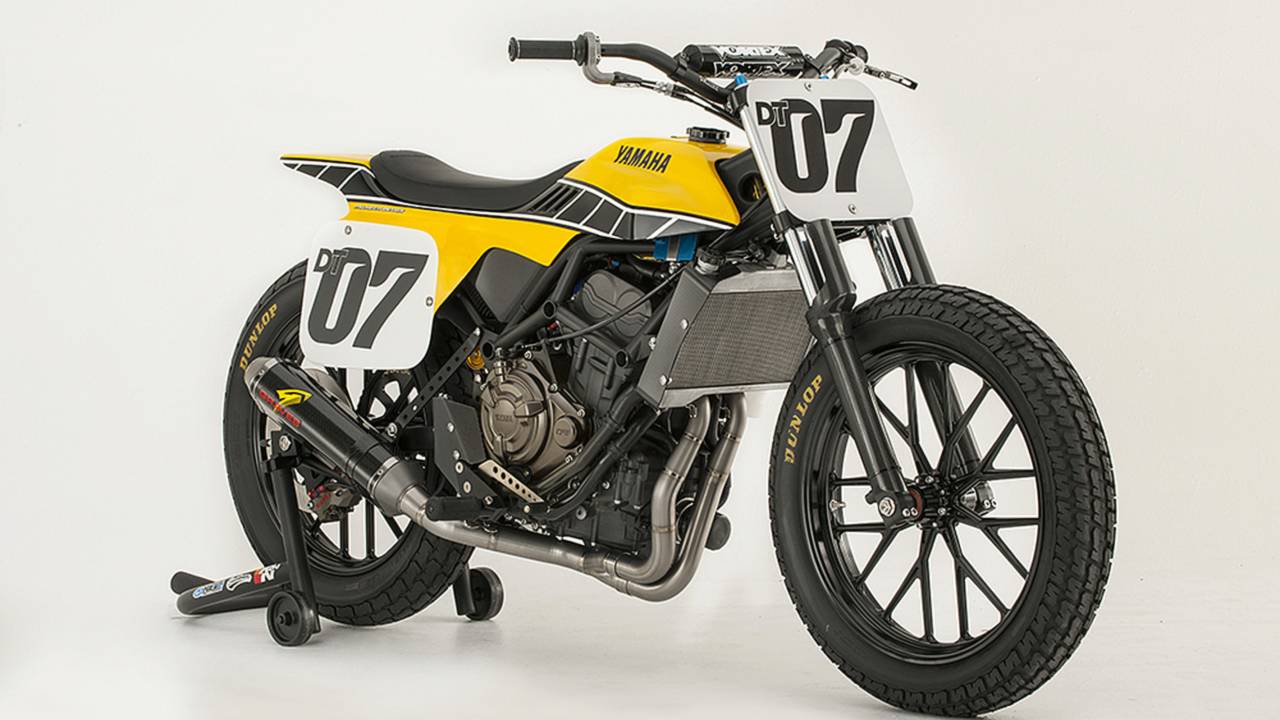 Yamaha unveils the FZ-07. The bike is a hodge podge of cool parts.

The DT-07 Flat Track Concept was devised by Yamaha’s US Racing Division and Jeff Palhegyi Design(JPD). Composed of a custom chrome-moly frame with a 90-horsepower version of the FZ-07 parallel-twin, backed with a Graves exhaust.

“When the FZ-07 was first introduced, we knew that the bike’s ‘Crossplane Concept’ parallel-twin engine had outstanding low- to mid-range torque, which is ideal for flat track racing,” commented Keith McCarty, Motorsports Racing Division Manager for Yamaha Motor Corporation, U.S.A. “Babe Demay’s FZ-07 flat track creation has already shown huge potential this season, with Dominic Colindres winning his heat race and also finishing fourth at the most recent AMA Pro Flat Track event. Here in Cypress, we’ve been doing some exploration of our own, and the DT-07 Concept is the result. The FZ-07 is a great bike and also a great platform for customization. We wanted to see what we could do with the bike as a flat tracker, and we’re very pleased with the results.”

The bike is a hodge podge of cool parts, from an adjustable pivot-point and linkage swing arm with an Ohlins rear shock to the modified R6 front end.

Black Propulsion Lab wheels, a Saddlemen seat, and some VORTEX handlebars round out the race bike package. The yellow and black combination paint scheme just gave the bike that extra alluring touch it needed to “wow” the crowd at the AIM expo. Plus black and yellow blur together nicely when the bike blows past the crowds at the race track.

“One of our specific goals with the DT-07 was to retain some of the FZ-07’s styling cues,” Derek Brooks, Motorcycle Product Planning Manager for Yamaha Motor Corporation, U.S.A., added. “I worked with Jeff (Palhegyi) on the design of the bike, and we literally used the FZ-07’s fuel tank cover as the basis for the body mold on the DT-07 Concept. The entire bike was essentially built from scratch, and it is Yamaha’s interpretation of what a dirt tracker designed from the ground up in 2015 should look like.