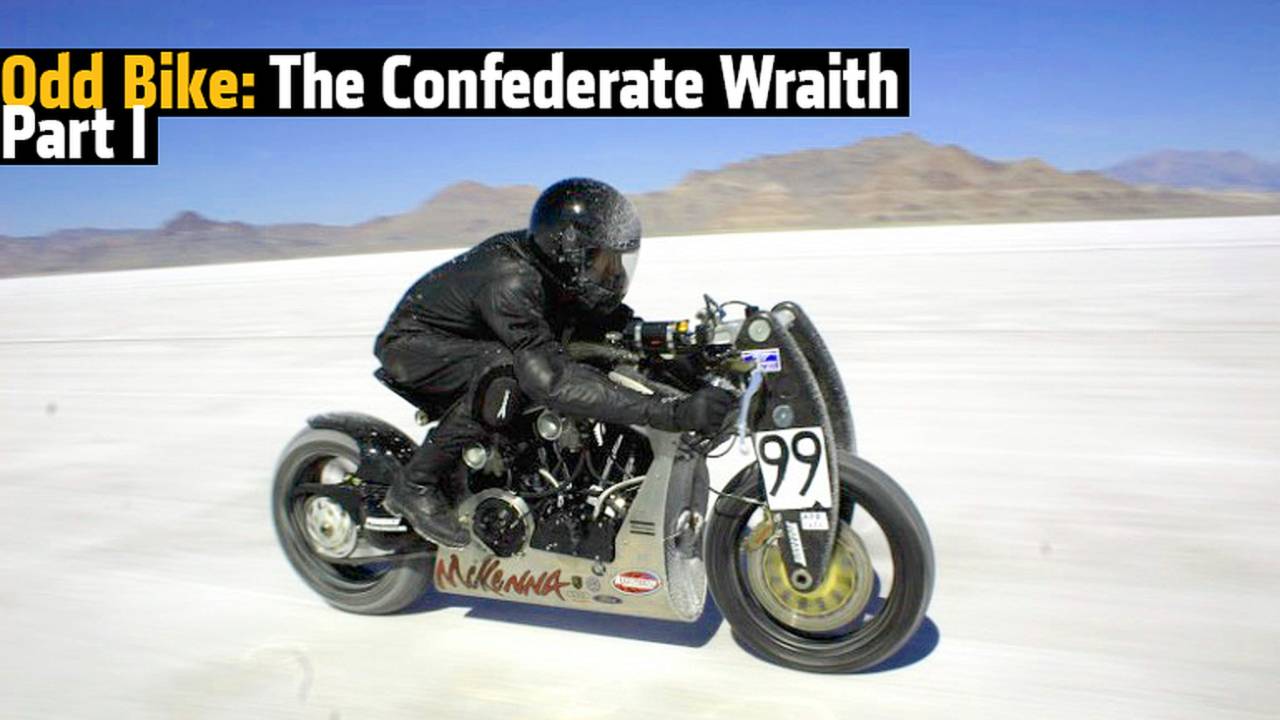 There are rare instances in the realm of motorcycle design where an icon emerges.

There are rare instances in the realm of motorcycle design where an icon emerges. These are machines so radical that they serve as a clean break from the standards of the past, thereby setting a new template and pushing the high-water mark up the wall a few extra feet. To truly be an icon, they must influence subsequent processes and inspire a new thread in motorcycle design; one-off machines that immediately fade into obscurity won’t do. They can be new standards of beauty, of performance, of chassis design, or of templates for hitherto untried categories (or some combination of all four). These motorcycles are often the product of years of research and countless design hours—produced by multi-billion dollar corporations that can afford to take a risk once and a rare while.They are not often produced by a tiny boutique manufacturer that has built less than a thousand machines, conceptualized by men who were not classically trained “designers” with decades of experience under their belts.

The Confederate Wraith was one such icon that emerged from Southern Louisiana like a thundering slap in the face to all that the motorcycle industry held dear. It was an absolute break with tradition, a bold insult to the long-held standards of a conservative industry, and a new way of conceiving of the motorcycle that was unlike anything that had preceded it. It was a product of looking forward while respecting history, a curious mixture of old and new ideas blended into a stunning machine that was as brutal as it was intelligent.

The story of the Wraith must begin, inevitably, with the story of Confederate. Founded in 1991 by H. Matthew Chambers, Confederate was as much a product of Chambers’ ideology and uncompromising principles as it was the result of a desire to introduce a new concept in American motorcycle manufacturing. A long time motorcyclist and passionate student of Southern history, Chambers was far from the prototypical entrepreneur. After a series of career changes he earned a law degree and practiced as a trial lawyer in Baton Rouge, Louisiana. He established a successful practice and earned a tidy income, but dreamed of contributing something greater to the world.

After winning a particularly grievous personal injury case in 1990 and earning a considerable fee, he sold his share of the practice to his partner and with a million dollars of his own money set out to start his dream project: An American motorcycle that would eschew the stagnant design and commercialization of the American market in favour of an heirloom-quality machine that would have dominating performance. His plan would spark the renewal of an industry that had not existed in the Southern United States since Simplex had faded into history. In conception and execution, it would prove to be a labour of love born of high-minded ideals and a desire to renew craftsmanship in an industry that had become driven by profit margin.

READ MORE: The Best of The One Motorcycle Show | RideApart

Chambers’ ideas were as esoteric as they were inspiring—a lone voice in the wilderness calling for a conceptual shift in the way motorcycles were designed and built in America. Design and construction would be unhindered by considerations of profits. Individualism would be emphasized, as would mechanical detail and craftsmanship. Nothing ancillary or unnecessary would be present. The machines would be raw and would command respect from their riders, channeling their uncompromised nature through their performance. Chambers’ tenets called for a renewal of what he called “The American Way” and the abandonment of “The American System”: at its core the idea is to bring back quality, pride and craftsmanship in American manufacturing instead of promoting materialism, stagnant design, and marketing falsehoods. This rhetoric continues to inspire confusion among the masses who have been weaned on cheap mass-produced motorcycles fluffed up with contrived links to a mythos cooked up in the boardrooms of multi-billion dollar corporations.

The name Confederate, often a source of controversy in the early years of the company, was a product of Chambers’ appreciation of Southern history and his unapologetic bucking of convention. Much to the chagrin of politically-correct followers and “Yankee” interviewers, Chambers celebrated the exploits of Southern heroes, citing them as the inspiration for the company’s rebellious spirit. Racial implications were never a part of the program, but were often brought up by media members who focussed on the negative aspects of Chambers’ heroes rather than accepting the philosophical implication of his celebration of the South and pure spirit of rebellion against an overwhelming adversary.

In Chambers’ idealized view, the South was railing against the Northern corruption of American ideals brought on by the imposition of centralized government—a parallel to how Confederate was fighting the stagnation and materialism that had enveloped the motorcycle industry. He pointed to the lack of industrial development in the South as a result of the history that followed the Civil War, a situation he aimed to correct by promoting manufacturing in the region. In recent years, this rhetoric has been softened somewhat in Confederate’s marketing material, but the basic principles still linger.

Chambers approached drag-racing specialist Kosman Specialties in California to develop a chassis for his motorcycle. A stiff, well-engineered frame would be needed to ensure the good handling that most American motorcycles seemed to lack. While ideas for a chassis using a unitized engine as a stressed member were fielded, in the end, the choice of a non-unit Harley-pattern big twin for motivation led to the development of a steel cradle frame with a massive three-inch backbone. A two-inch front downtube doubled as the oil tank for the dry sump engine. A triangulated rear swingarm operated a straight-rate rear suspension supported by a pair of shocks operating on a single pivot, ala HRD Vincent. Ceriani forks supported the front, with twin Performance Machine rotors and calipers providing meaningful stopping power.  A five-speed gearbox developed in conjunction with Kosman and Sputhe rotated the gear shafts 90-degrees, then flipped the countershaft to the right side of the bike, to create a vertically-stacked transmission that aided packaging and created a structure stiff enough to support the swingarm pivot—an innovation that would become a Confederate signature.

The first prototype hit the road in 1994. Dubbed the Grey Ghost, this machine set the basic template of subsequent Confederates—a long, low chassis with top quality suspension and brakes, with minimal bodywork surrounding a hulking “radial” twin, Confederate’s term for the 45-degree layout that references the history of the V-twin as a slice-of-a-radial-engine arrangement. Power for the first machine came from a 93 cubic inch (1525cc) S&S-produced big-twin clone—production machines would use a variety of powerplants from S&S and Merch—and specifications varied considerably over the course of production. Customers could customize most elements of their Confederates and chose from a variety of engine, suspension, wheel, and brake combinations—an American cruiser with 17-inch Marchesini wheels, fully floating Brembo cast iron rotors, and adjustable WP forks. While these first generation machines might seem relatively conventional by our current standards, what with the proliferation of factory “customs” and “muscle” cruisers in recent years, in the mid-1990s there truly was nothing like a Confederate on the road. It was the prototypical brutish sport cruiser, a distinctly American machine that could go, turn, and stop, while looking mighty badass in the process...

Read the rest on Odd-Bike.com