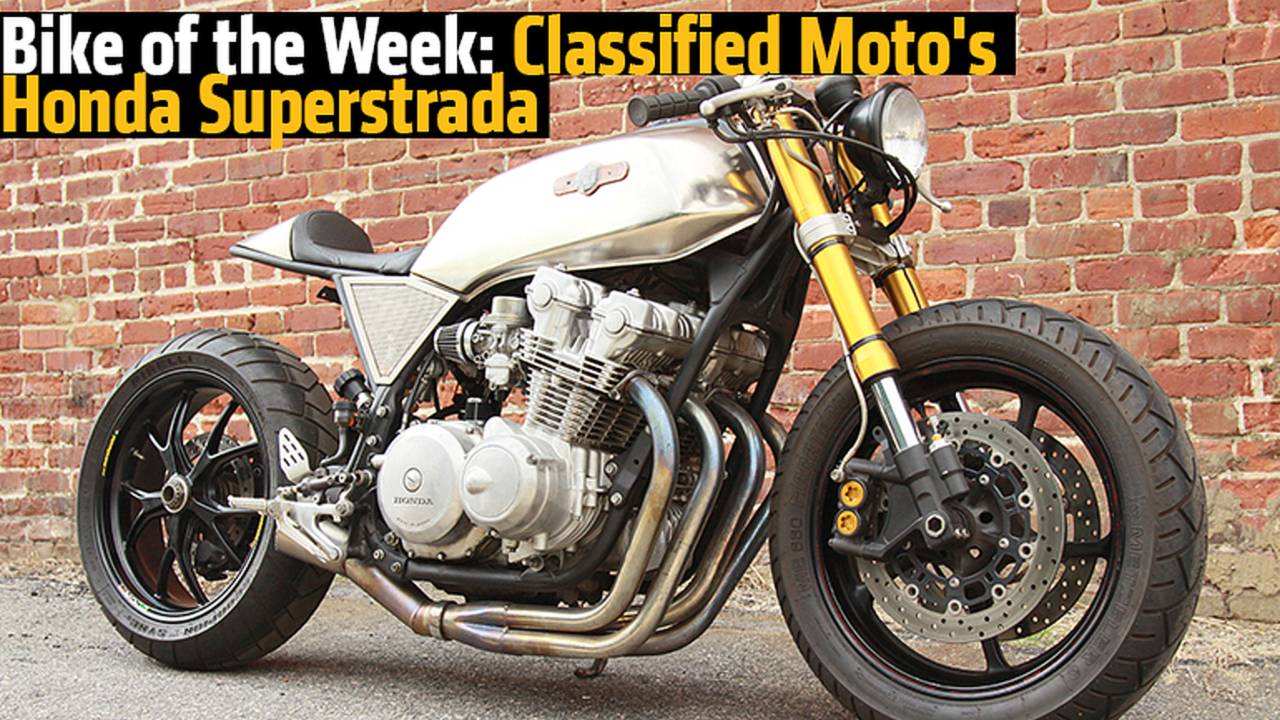 John Ryland and his team at Classified Moto have produced another outstanding café racer by transforming an epic original “big four” superbike into a true-grit sportbike.

Starting the project with a complete 1980 Honda CB750F, Classified scrambled parts from a Yamaha YZF-R6 and a Ducati Multistrada to create a sleek, lustrous machine.

When it debuted in 1969, the classic four-cylinder Honda CB was billed “the most sophisticated superbike ever” by Cycle magazine. In this day and age, “superbike” is a term used for AMA’s premier liter-bike race class. Although the CB is now considered a middle-weight standard UJM, it well deserves its place in the AMA Motorcycle Hall of Fame.

So, what happens when you breed a heroic Honda superbike with a sexy Ducati Multistrada and supple Yamaha R6? Classified Moto’s magnificent Superstrada is born.

The rear end of the Superstrada features the chic tail of a Ducati Multistrada with a factory Showa monoshock and Ducati 1098 wheel. Styling an elegant single-sided swing arm, the modern engineering reduces weight, but has increased rigidity in order to enhance road performance by providing mid-corner stability for the atypical café racer.

Hovering above the rear wheel is a clean and neat custom sub-frame with a finely tailored seat and petite cowl. Cupped inside the cowl is a precisely placed LED light, shaped to preserve the sleek outline of the Superstrada.

The overall refined appearance of this classy moto—in addition to its tidy sub frame—lies in its original CB tank lined with two glossy nickel plated panels. Flawlessly placed over the valiant naked engine, it's as seamless and smooth as glass. The upgraded four-into-one exhaust, with shiny Vance and Hines pipes, add to the effect of this eye-catching machine. It also gives the old relic a rumbling cadence that sounds as impressive as it looks.

Classified may have torn apart a famous motorcycle that was impeccable in its day; however, Ryland was able to improve the performance and graceful look of this old race bike, while also preserving the foundation of its history.

READ MORE: Watch this Recap of The One Motorcycle Show – RideApart