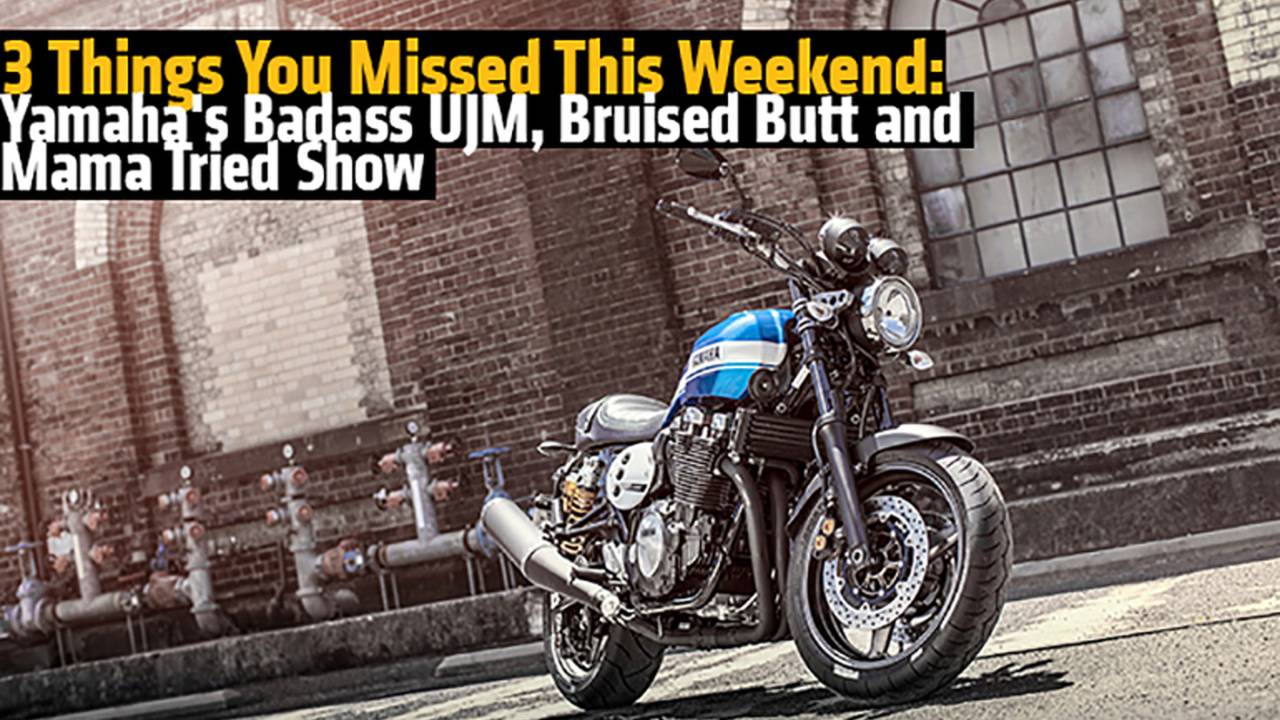 Here's a look back at the weekend, to see the launch of the Yamaha xjr1300, a bruised butt from racing and the Mama Tried Motorcycle show.

You missed a few things over the weekend, and we at RideApart want to bring you up to speed (pun intended). Here's what you missed on Monday February 23, 2015.

It felt like Yamaha was teasing us when they released the XJR1300 as a non-US model. They held the international launch late last week and we, being an American based publication, were not invited (insert sad face).

I’ve been very excited about this bike for 2015, a badass UJM that may encourage Honda to do the same with its newish CB1100 and hopefully with not just another deluxe model, but with something more sinister. It's a standard, retro throwback that hopefully performs as good as it looks.

For better or worse depending on your preference, the Yamaha XJR1300’s powerplant has remained pretty much the same since Yamaha bored out its 1188cc to a 1250cc in 1999. Since then, they’ve added fuel injection and the tuning has changed over the years, but the essence of a 1300cc inline four remains the same.

For the newly redesigned 2015 model it has all kinds of go-fast goodies like clip-ons for the Racer version, carbon fiber body work, Ohlins shocks in the rear, rear sets and slip-on pipes.

The thing that makes me laugh about the above commercial is that it’s taped in the US, at Keino Cycles in Brooklyn. Come on Yamaha! Bring it over the pond. Join this Facebook page for others who want the same: https://www.facebook.com/XJR1300USA

“Beer was cheap, that was good... girls were cute too...” that helps sum up the Mama Tried custom motorcycle show held this past weekend in Milwaukee, Wisconsin. It’s the perfect spot for hardcore Harley guys as you can visit the Harley museum one day (as parking for the event is at the museum), the show the next and follow it all up with ice racing.

See that guy on the vintage Harley in overalls sliding on ice? That’s my hero, Bender from Georgia, who thrashes on vintage Harleys worse than I ever could on a 2-stroke dirt bike. Some of the crew from Wheels Through Time Museum in North Carolina were also on hand ice racing vintage bikes.

From Mama Tried Motorcycle Show: Another great one! @dailyrider800 bad ass ripper. This weekend is going to be insane. So much talent and good vibes. Thank you to everyone who is making the effort to attend ‪#‎mamatriedshow‬ @jrscycleproducts and I @scottfuel are blown away by the support and enthusiasm. Thank you

First The One Motorcycle Show, now Mama Tried—I’m liking the (somewhat) new emergence of winter-time bike shows. No matter your taste in motorcycling, it’s great to see guys getting together, riding, building and thrashing, despite the temperature.

Frenchman Randy De Puniet laid his Suzuki down hard on the first round of World Superbike racing this past weekend in Australia. He not only purpled his butt, he also broke two ribs in the process. Still think you have what it takes to race with the big boys?

A Movie Star on an Italian

Did you know movie star Ewan McGregor rides motorcycles? Who knew right? This has been a headline that keeps jumping onto my screen this morning. He’s a (seemingly) cool guy, a true rider and enthusiast, and likes Italian bikes… ok, who cares? Yes, that's four things, but this one doesn't really count.