3 Things You Missed This Weekend: Rossi Wins, Ducati's Comeback and is Pedrosa Done? 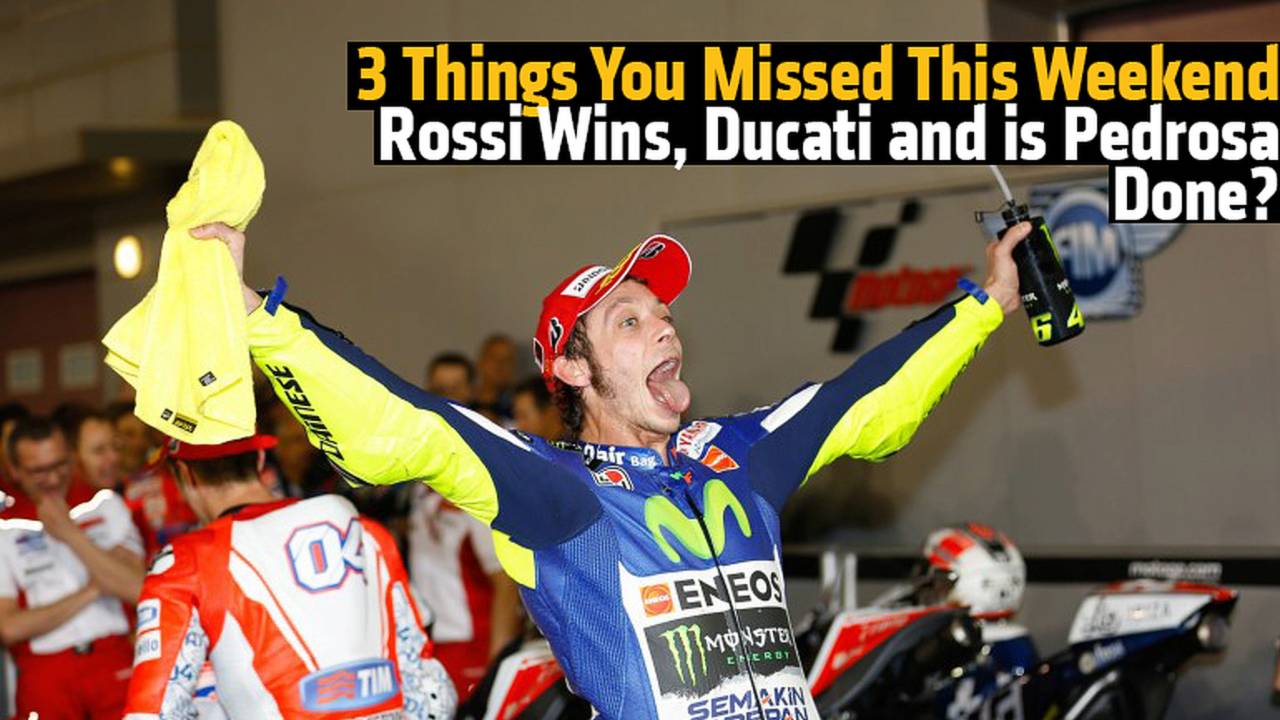 What's news from the weekend in one tidy package.

For those of you living under a rock a lot happened in the world of motorcycling this past weekend.

At age 36, Valentino Rossi is supposedly washed up, past his prime, and no longer able to compete. Apparently the G.O.A.T. (greatest of all time) didn't get the memo and decided to win the 2015 season opener MotoGP race in Qatar.

This was his 83rd premier class win over second place Andrea Dovizioso—beginning his 20th season racing Grand Prix with style. If you haven't watched the race you need to. It's a showcase of riding. On one side, there's the gracefulness of the Yamaha ridden aggressively by Rossi, and on the other, there's the brute power and braking of the Ducati that Dovi rode. Even knowing the winner, you will find yourself on the edge of your seat until the last lap.

After a miserable few years at Ducati—including a not so stellar campaign with Valentino Rossi—they have returned to racing form. The GP15 designed by Gigi Dall'igna is nothing short of transformative compared to the most recent Ducati offerings. The brute power is still there, but now it handles as well. Dovizioso was able to run the entire race at full speed and didn't seem to worry about tires. To see Ducati fight for the win and push Yamaha right to the checkered is a very promising sign of good things to come.

Pedrosa done for the season?

Some not so positive news is coming out of the HRC garage. Dani Pedrosa is still suffering from arm pump. In the course of the last few seasons, the Spaniard has undergone multiple surgeries for the condition.

In simplest terms, arm pump is due to blood not flowing out of the arm area quickly enough for new oxygen rich blood to flow in. This ultimately causes a lactic acid build up. If you have ever lifted weights or exercised, this is what many people call muscle failure. Pedrosa was advised not to have additional surgery during the off season and it turns out that may be working against him. We will have to wait and see what happens during his lay off.