Aprilia says it is continuing its tradition of bringing superbike technology to the street, in unveiling the 2017 RSV4 and Tuono 1100 at Intermot 2016. The company calls the RSV4 “the best uncompromised superbike," and says its stripped down high-handlebar sibling "remains the best machine for pure joy on the track and the road.”

Both models are Euro 4-compliant, feature improved suspension and braking elements, and an updated Aprilia Performance Ride Control package, which features cornering ABS. The Aprilia Traction Control, is adjustable on the fly, (without having to release the throttle) to eight settings, as well as disabled, which Aprilia says is operate via a "practical joystick.”

The new Aprilia Wheelie Control, adjustable to three levels, plus disabled, receives more precise operating strategies thanks to the repositioning of the inertial platform. Wheelie control can now be adjusted on the fly without closing the throttle, like the ATC, thanks to the new and more practical left side control.

A new Launch Control, for use on the track only, with three settings, is more effective with new operating strategies. Also new is the Aprilia Quick Shift – the electronic gearbox that allows shifting without closing the throttle and without using the clutch. The feature now adds the capability of clutchless downshifting.

Another new feature is the Pit Limiter that lets you select and limit the top speed allowed in pit lane at the track or simply to make it easier to comply with posted speed limits on the road. Both models also have cruise control. 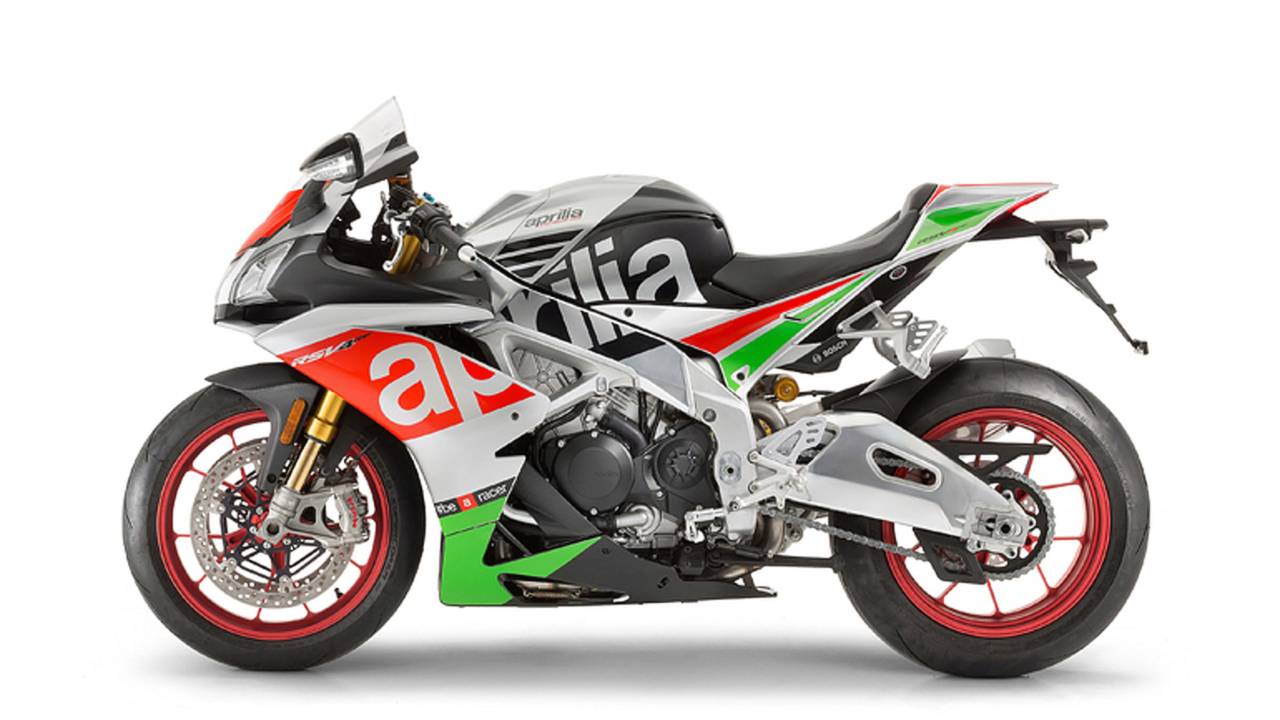 The 2017 Aprilia RSV4 features new ATC: Aprilia Traction Control, adjustable on the fly, (without having to release the throttle) to eight settings, as well as disabled.

The Tuono, rated at 175 hp, is again offered as the 1100 RR Aprilia describes it as “an exceptional thrill machine, the heir to a dynasty of naked sport bikes acclaimed by critics as the most effective and fastest bike in its segment.”

The 1100 Factory, Aprilia says, is “the more exclusive version, dedicated to an extremely demanding public; this bike is equipped with components which are largely derived from the Aprilia RSV4 RF superbike.”

The Tuono V4 1100 is now fitted with the advanced multimap Cornering ABS system, “developed in collaboration with Bosch to guarantee maximum safety on the road, without sacrificing any performance on the track.”

The Cornering ABS maps can be combined with any of the three new engine maps (Sport, Track, Race). Also, the new ABS system works in unison with a Rear Liftup Mitigation system that limits the lift of the rear wheel during more abrupt braking.