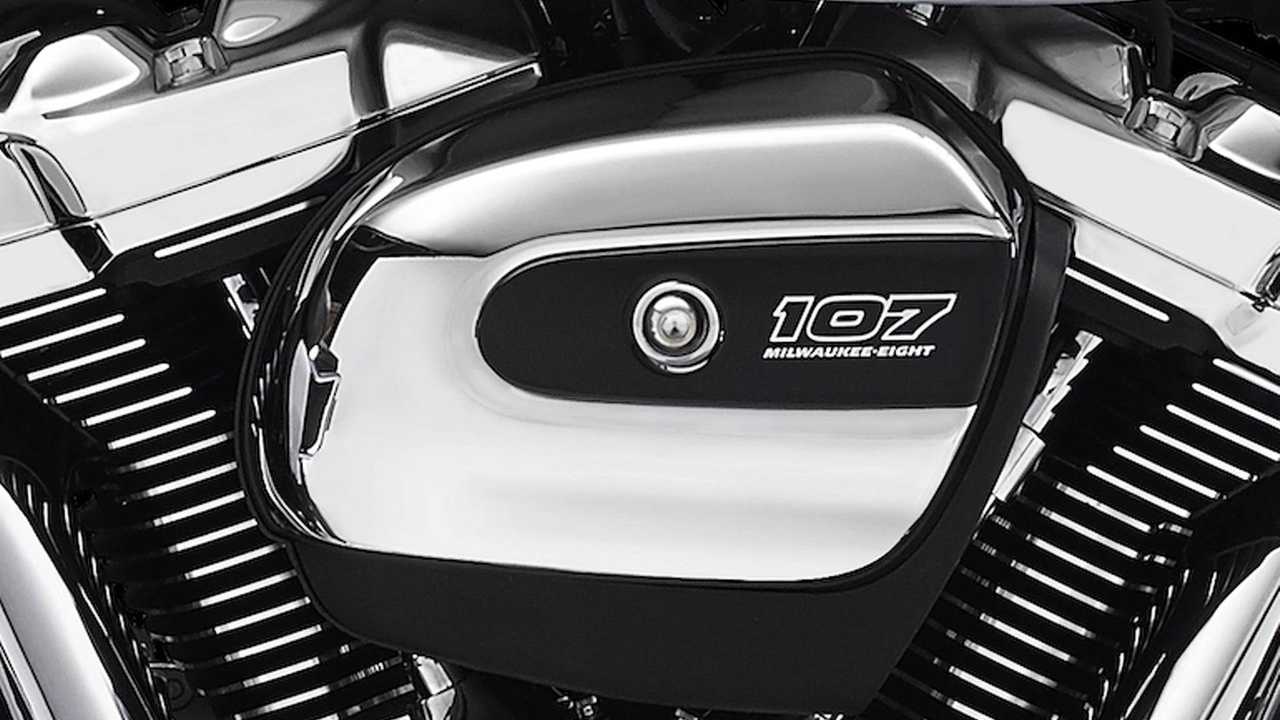 The worst-kept secret in motorcycling has finally been confirmed: Harley-Davidson has pulled the cover off an all-new powerplant: the Milwaukee-Eight.

The ninth big twin in H-D's  history, the engine gets its name from the fact there are four valves in each cylinder. Retaining the classic 45-degree V-twin cylinder angle, the Milwaukee-Eight engine produces 10 percent more torque, according to the company, with the four-valve cylinder heads offering 50 percent more intake and exhaust flow capacity than previous year models.

The engine will be offered in two displacements: 107 cubic inches (1753 cc for those of you using the new math) and 114 cu. in. (1868 cc), the larger of the two engines being offered in Custom Vehicle Operations (CVO) models –– namely the CVO Limited and CVO Street Glide.

Harley-Davidson says the new engine is counterbalanced to cancel 75 percent of primary vibration at idle, "retaining the classic feel of a Harley V-Twin engine while being very smooth at highway speeds." The company, which is famous for making motorcycles that can be... a little warm, says a new heat management strategy improves rider and passenger comfort.

“The Milwaukee-Eight engine carries the legacy of Harley-Davidson big twins into the future,” said Chief Powertrain Engineer Alex Bozmoski. “While respecting the essential big twin character, we’ve created an all-new motor. Every aspect of performance, durability and styling has been improved as a direct response to the voice of Harley-Davidson customers around the world.”

Four-valve engines are usually associated with higher-revving, high-performance motorcycles, usually those with dual overhead camshafts. But the presence of more valves, especially on such a large engine, will not only improve performance but improve vehicle emissions.

The engine, along with all-new front and rear suspension, will be featured in the model year 2017 touring motorcycle lineup, which RideApart will be riding at the launch event next week.

“These are the most powerful, most responsive and most comfortable touring motorcycles ever offered by Harley-Davidson,” said Scott Miller, Harley-Davidson vice president of styling and product development strategy.

Harley-Davidson had only recently upgraded its touring segment in 2014, with its Project Rushmore initiative. But it's expected that the new engine comes in response to looming emissions regulations like the Euro IV standard in the European Union, which comes into effect on 1 January 2017.

Harley-Davidson cruisers, meanwhile, will continue to be driven by the Twin Cam 103 V-twin that has been standard in the company's models for the past few years. S series models like the Low Rider S will carry the larger Twin Cam 110 engine.

H-D is planning to unveil the model year 2017 line-up to the general public through a series of dealership open house events on 23 September.