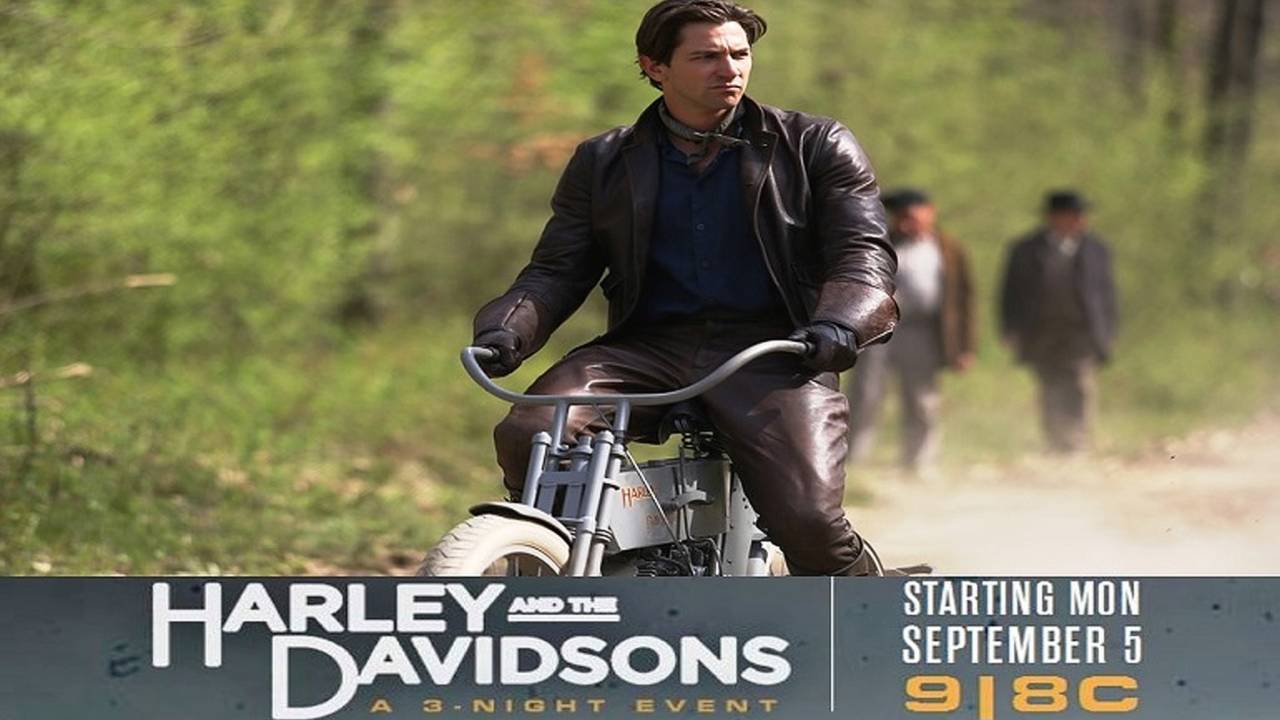 Did any of this really happen this way? Does it matter?

I've had a lot to say about this new Discovery Channel three-night miniseries lately, but in less than a week you'll all be able to see the real thing on your TV. Episode 1 premieres on Monday September 5th, with episodes 2 and 3 following on Tuesday and Wednesday, all at 9pm EST. I was given advance access to a nearly finished cut of the first episode a few weeks ago, so here's my take on it.

) is a naturally gifted engineer, with plans to go off to get a formal education.

These two young men are trying their damnedest to make something of their lives, or at least make some money and meet some girls; the classic motivation of men, going back to the dawn of civilization. In a perfect combination of events, they sneak into a burlesque show where Bill gets the inspiration for a new motor-driven bicycle design. Perfectly natural thing to happen to a young, budding engineer when looking at a pretty girl.

A few months later, Bill and Arthur have a motor that makes noise and smoke, and sometimes even runs. When Walter returns to the family home, he lends some much needed cash, and a cooler older head, and soon a bike is built and can be ridden all over town. Ironically, it is cool, responsible Walter who is the first man ever to come down with Harley fever; symptoms of which include riding to live, and living to ride.

At this point in the story, the villain appears, in the form of George Hendee, the man behind Indian. Joe Merkle, founder of another early motorcycle brand, also tries to sabotage the H-D boys, as it seems it was every man for himself back in the aughts. Fortunately, despite attempts to manipulate the rule book, you know what happens when the green flag drops... The early bike proves fast enough, and above all else able to survive these races without falling apart or breaking down.

This is a good cast, better than you would expect from a basic cable original mini series, with two of the three leads coming from HBO's "Game of Thrones." There is some clunky dialogue, and there are some times where characters awkwardly blurt out exposition, or their motivation, but all in all it is a solid story. The production values are feature-film quality, and you can see that a lot was spent to get the look right. The production shot in Eastern Europe, which apparently still looks like America in the early 1900s.

I'll admit I'm not a huge Harley-Davidson fan and I don't know their history backwards and forwards, but I suspect the production did take some liberties with the events portrayed here. Don't expect this to be a Merchant and Ivory period piece, or a Ken Burns documentary. But that's OK, because neither one of those things has motorcycle races (though, I'll bet Ken Burns could do an amazing 12-hour documentary on the Isle of Man TT).

In this first episode there have got to be at least four races, which are integral to the plot, and if you read my story on the bikes in the movie, you know they staged them by actually racing the bikes.

Right here, you can see my personal biggest gripe with the movie: The helmets. The bikes look great, the tracks and speeds even seem real, but the helmets really look like off the shelf half helmets covered with leather.

Now, perhaps it was a safety issue, seeing as how these stunt men were racing motorcycles with little grip, almost no suspension, and plenty of power at actual freeway speeds. But until after WWI helmets in football, racing, and aviation were typically just about keeping the pieces of your skull together for easy clean up, more than anything else.

Actual board track racers circa 1920

RideApart Worth Watching: Yes, 8 out of 10 based on the first episode. There are not a lot of films about motorcycle racing that are anywhere near accurate. As far as I know, this is the only film that even tries to depict what the early years were like on the dirt and board tracks.

Redeeming Quality: For me, watching these replica bikes, with nearly the same limitations of the originals and less power, battle it out on the track is worth every minute of my time. There is little real motion picture footage of bikes of this era in action, and no one rides the few original bikes left in anger anymore. Films like this are as close as we can get, unless someone puts together a traveling roadshow, much like the biplanes that mock dogfight at air shows.

is planning a themed nights of programing, with Monday being all about motorcycles. If you like what you see, or watch it and don't like it, let them know. Maybe with the right kind of feedback we can get some good programing, and not just more bad reality TV wrench flinging. With Speedvision's Two Wheeled Tuesday long gone it would be nice to have motorcycle related content somewhere consistently, even if only one night a week.

Click over to watch the trailer, and be sure to set your DVR, or be watching Monday night at 9pm. You should also be able to watch on Discocvery Go, their streaming site.