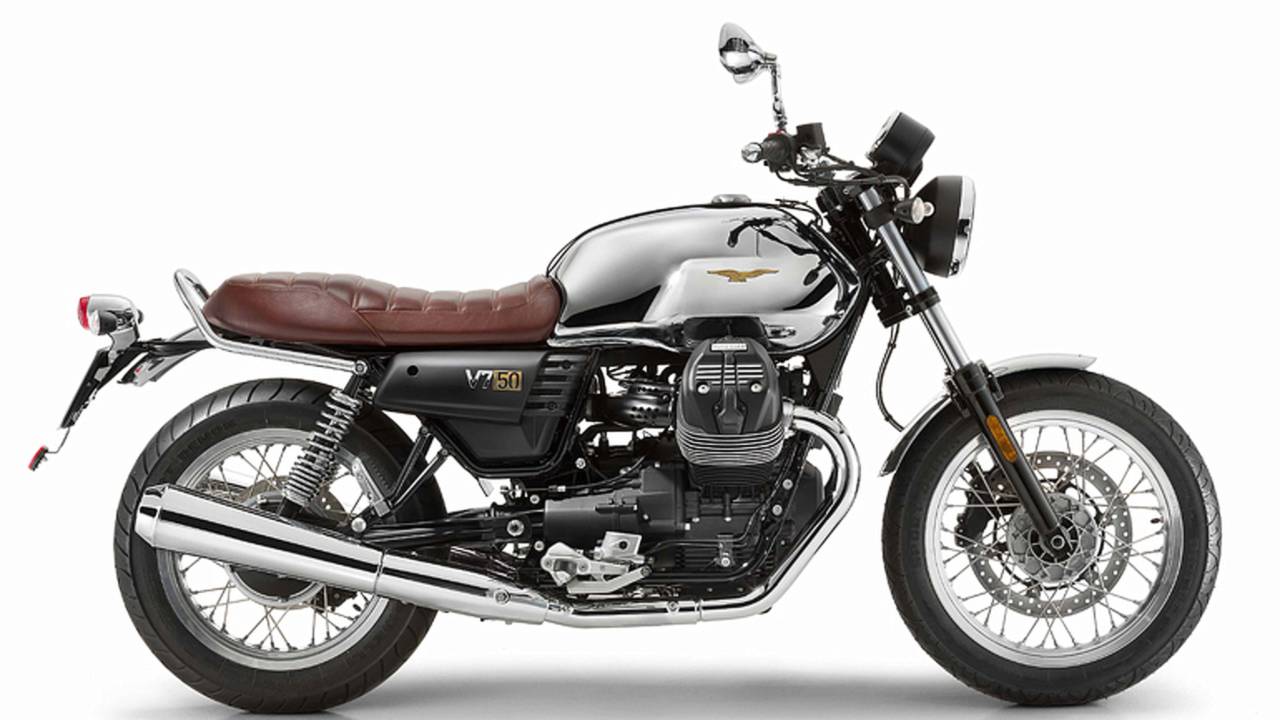 Moto Guzzi displayed the new 2017 Moto Guzzi V7III for the first time in the US last weekend at IMS Chicago. The best-selling Moto Guzzi model since 2009 is all new for 2017, and the model is also celebrating a milestone – 50 years of the V7. The range, now featuring four distinct options, will be available in March/April with a starting MSRP of $7,990.

The V7 was a revolution the moment it hit the streets in 1967. The brainchild of Giulio Cesare Carcano, the V7 implemented the innovative 90° transverse 703cc V-twin and immediately established itself as the world ambassador for Moto Guzzi prestige, elegance and reliability. To this day, the Moto Guzzi V7 remains one of the most celebrated and well-known Moto Guzzi models of this rich history. Now the V7 arrives with updated features, performance, and pricing.

The V7 III returns in its three popular versions, Stone, Special and Racer that now,take on stronger connotations and differ even more from one another. For 2017 Moto Guzzi pays homage to fifty years of the V7 model by introducing a fourth version, the Anniversario, a numbered limited edition, characterized by brand new and exclusive details.

Dedicated to true admirers of the eagle brand, the Anniversario is unquestionably the most fully featured V7 ever, with a standard genuine leather saddle, a work of art worthy of the top customizers, polished aluminum fenders and milled engine cooling fins. The tribute to the original V7 includes an elaborate chrome motif, beginning with the fuel tank featuring the Moto Guzzi eagles in a gilt finish. MSRP: $9,990, available: April

True to the racing tradition of the eagle brand, the V7 III Racer is a true custom bike with incredible attention to detail, offered in a limited edition. The references to Moto Guzzi’s sporting triumphs begin with the “Racing Red” color of the frame and swingarm, inspired by the legendary “red frame” V7 Sport from 1971, coupled with the new graphics for the satin-chrome fuel tank dominated by the red eagle. The racing look continues with the clip-ons and racer saddle, while the side panels and injector covers in black anodized aluminum are a thing of beauty. This traditionally one-seat model shows its versatility with a standard type-approved two-seat version featuring special passenger footpegs, and Öhlins shock absorbers for improved handling.

The heritage of the original V7 is the inspiration for this elegant motorcycle, with generous chrome trim and shiny graphics, in Nero Inchiostro (Ink Black with green accents) and Blu Zaffiro (Blue Sapphire with orange and silver accents) versions. The colored band on the under-seat side panels matching the racing stripe on the fuel tank pays tribute to the unforgettable V750 S3 from 1975. A host of distinctive details include spoked wheels with polished aluminum channels and black hubs, an instrument panel with two circular dials and the “old-school” look of the quilt-stitched saddle, complete with new passenger grab rail.