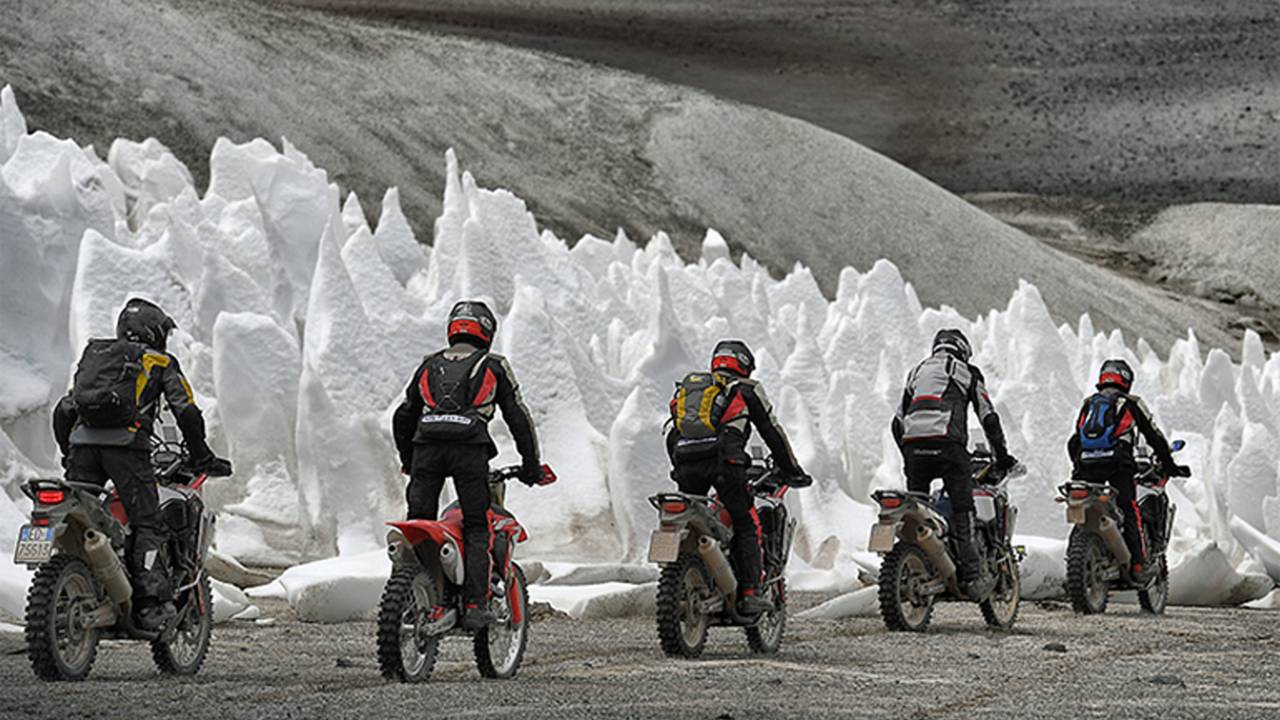 Last weekend, the new Metzeler MC 360 went through the final stage of the test which challenged it with extreme trials in Chile at the Nevado Ojos del Salado volcano, located at the border between Argentina and Chile. At 6,891 meters, it is the highest volcano in the world. During this particular test, the MC 360 on the Honda Africa Twin and CRF450RX captured three records:

(2) 5,960 meters as maximum height for a twin-cylinder motorcycle

(3) 5,977 meters as maximum height reached with a motorcycle in less than 24 hours

The first record set was a real team victory: Francesco Catanese, Fabio Mossini and Karsten Schwers riding the Honda Africa Twin and Salvo Pennisi, riding alternately both the Africa Twin and the CRF450RX. The team managed to reach 5,900 meters after starting from sea level, in just 22 hours and 30 minutes. The second success was an individual record claimed by Fabio Mossini, who managed to bring his Honda Africa Twin to 5,960 meters above sea level, the highest level ever reached with a twin-cylinder motorcycle.

The third individual record was set by Metzeler’s Head of Testing. Riding the CRF450RX, he set the mark for the highest climb above sea level ever reached by a motorcycle, bringing his single-cylinder Honda to 5,977 meters in 22 hours and 40 minutes. This achievement came after a challenging climb to reach the Atacama hut at 5,200 meters when riding the Africa Twin.

The adventure in Chile represented the final and most severe testing of the new Metzeler MC 360. It was aimed at assessing the tires’ level of performance, wear, versatility and resistance to tearing in extreme conditions, with temperatures ranging from +40° in the Desert of Copiapó down to -15° on the Andes. Things were made even tougher by the challenge to reach the extreme height in 24 hours without the support of oxygen.

Following five days of mandatory acclimation at increasing heights, where one rider and one technician were forced to give up due to symptoms of acute altitude sickness, the team left from the Pacific shore at Bahia Inglesa on Friday, March 3rd at 1:20 pm local time. After a challenging 300 kilometers ride through all kind of asphalts, screes, dirts, endless stretches of sand and deep mud pits, the team reached the base camp of Laguna Verde at 4,300 meters. The climb to the top began the next day.

Following a dramatic climb to the Tejos hut, 5,837 meters above sea level, and after riding through stretches of sand and ice sheets, the group had to deal with an unpleasant surprise: at 5,900 meters there are some impenetrable icy patterns, also known as “penitentes”. Such patterns, typical in this kind of area with very strong wind, were obstructing the chance of climbing any higher.

This is when Fabio Mossini and Salvo Pennisi decided to accept the challenge posed by the volcano and try the last effort. Luck supports the brave, and Mossini, with the big Africa Twin supported by the MC 360 managed to reach 5,960 meters to set the World Record for twin-cylinder motorcycles. Pennisi managed to bring his CRF450RX to 5,977 meters above sea level and set the absolute record of height ever reached by a motorcycle in 24 hours.