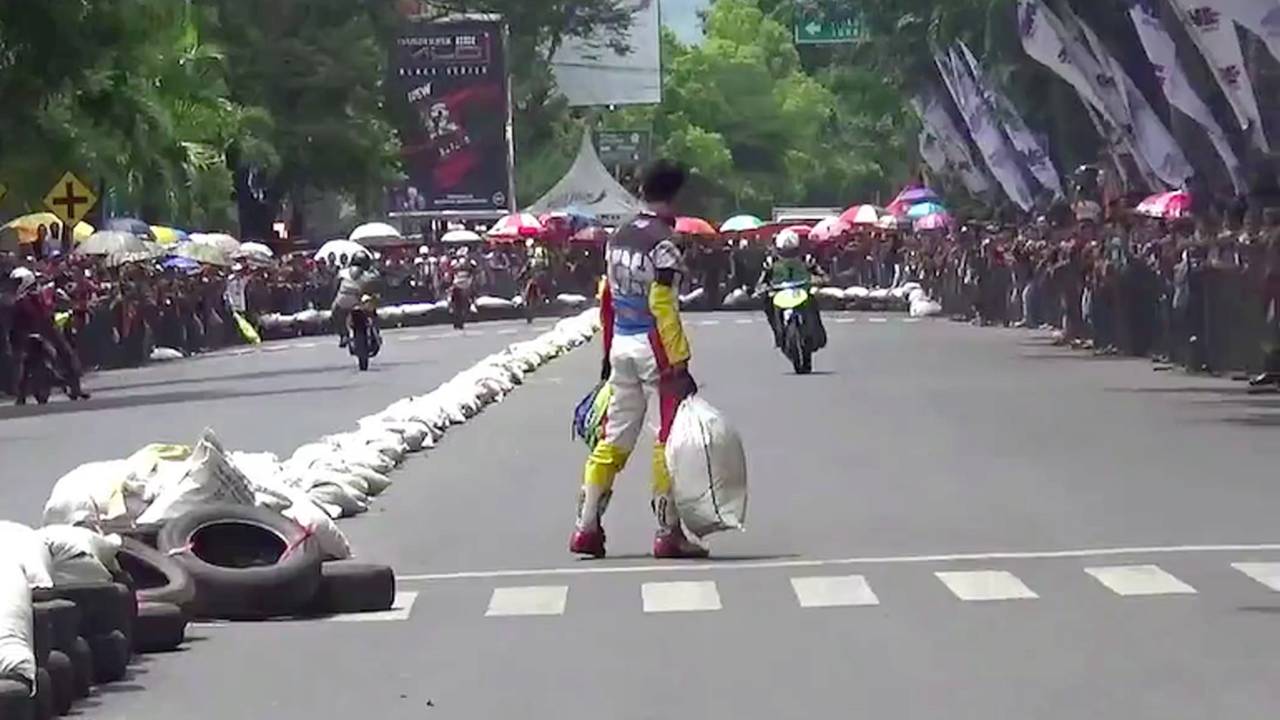 A viral video from a 2017 Indonesian scooter race shows us that rubbin' is not, in fact, racin' in the Indonesian Motor Association.

Footage taken at Indonesian road race reminds us all that Karma’s a bitch.

Scooter racing is serious business South-East Asia. Large-scale races are routinely held all over the region, drawing huge crowds and garnering the support of deep-pocketed corporate sponsorship. Recently, a video from a 2017 race in East went viral thanks to a beef between two of the riders, and it certainly makes an impression.

The day was Sunday, November 12th, 2017. Several streets had been blocked off in Bondowoso’s town square to create the annual event’s impromptu circuit. The video begins with competitors on the starting line before the flag is waved and the pack takes off. On the final corner of the first lap one M. Hasan - aka the rider in the vest - can be seen intentionally nudging a fellow competitor with his elbow, resulting in the other rider, Dimas Tri Prasetyo, violently tumbling to the ground.

The nudge that started it all.

Dimas can then be seen standing up and dusting himself off before removing his helmet and then walking back out to the middle of the track. For several seconds Dimas stands there with his helmet in hand, waiting for Hasan to come back around on the next lap. At some point Dimas decides against utilizing his helmet as his impromptu weapon of choice and instead opts to pick up one of the many large sandbags used to divide the sides of the track.

As Hasan rounds the second to last turn, he sees Dimas standing in the middle of the track, large bag in hand. Hasan continues towards Dimas and eventually makes an unsuccessful effort to swerve in an attempt to dodge the large and seemingly heavy item, but to no avail. The bag beautifully finds its mark thanks to a well-placed throw from Dimas, hitting Hasan’s front wheel and sending the rider to the ground – much to the enjoyment of the crowd that can be heard cheering in response to the action.

The exact moment Hasan started to regret his earlier decision.

Surprisingly the race isn’t red-flagged. Riders continue the race as Dimas – cool as a cucumber – calmly walks back toward his crashed bike. As Hasan gets up and starts to walk away, Dimas gives chase – much to the dismay of Hasan who seemingly doesn’t want the confrontation to continue. After Hasan hoofs it up the track, Dimas calls off the pursuit.

The chase is on.

Unsurprisingly, the Indonesian Motor Association (or IMA) were none too pleased about this incident, nor the fact it went viral as this admittedly doesn’t represent them in the best light. As a result it appears both riders have been penalized and banned from competing, though I couldn’t find a consistent source stating for how long. There’s no word on what the two riders’ beef was over, and from what I gather the race in question was the very first of the entire event. While I’m not sure how things are done over there, I think this may have been Hasan’s first race based on him wearing a neon safety vest.

The footage from the 2017 Bondowoso Road Race in East Java now has several million views across a myriad of platforms, and you can check out an edit of the good parts below.