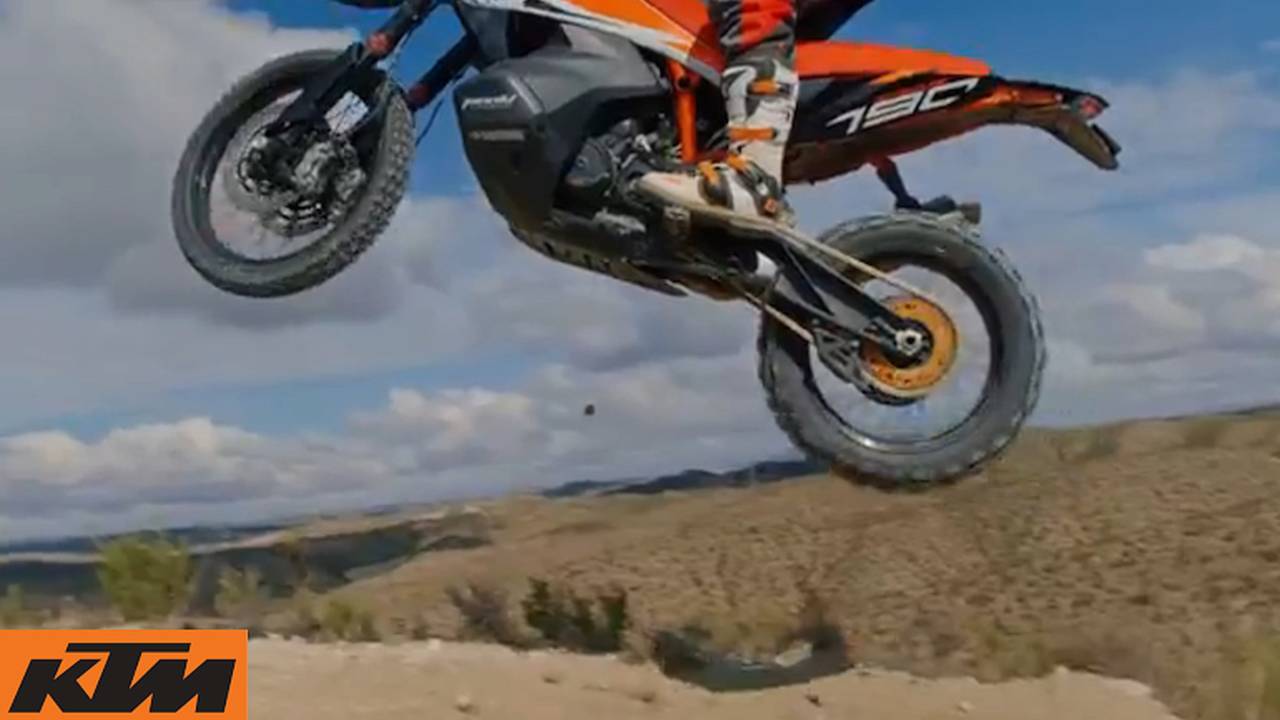 KTM's mysterious new 790 Adventure (R?) was spotted testing in Europe, and spy shots have been making the rounds.

After its big reveal last year at EICMA, KTM’s 790 Adventure R has just been spied testing in Europe.

Last November, KTM teased the motorcycling world with its gorgeous 2018 790 Adventure R prototype. Thankfully, the mystery surrounding the new adventure model has just become less of an enigma thanks to some recent spy shots taken somewhere in Europe that MCN Australia posted.

While details on the upcoming ADV machine are quite limited, we do know that the bike will be powered by a modified version of the same parallel twin originally developed for the 790 Duke. In its naked trim, that engine puts down 103hp and 63ft-lbs of torque, all in a package with an estimated curb-weight of under 450lbs.

The spy shots reveal all the standard off-road amenities one would expect to see on a modern production adventure model – hand-guards, a high-mounted front-fender, skid-plate, spoked wheels, etc.. The pre-production 790 ADV (R) also sports long-travel suspenders, as well as standard dual-disks up front and a single disk in back, both obviously of the ABS variety.

This isn't the first time that KTM pulled the cover off of a ridiculously sexy prototype only to have the production model end up being a much more watered-down version. Fortunately the spy shots confirm the upcoming production model doesn’t stray very far from the prototype design shown at EICMA last year. The bike in the spy shots still sports KTM’s aggressive-looking split LED headlight setup and pretty much all the same bodywork. However, the windscreen is a little different, the proto’s solo-seat has been changed to a two-up unit, and the trick Akrapovic pipe shown in Milan has been replaced with an in-house stock exhaust.

Alongside the midsize naked segment, the midsize adventure class is one of the fastest growing markets today. This has prompted manufacturers to increasingly invest in the genre, resulting in some stellar machines that KTM’s 790 ADV will compete against. Not wanting to miss out on the action. While we won’t know any official details until the suits at KTM want us to, 2018 is shaping up to be a good year for the adventure riding crowd.

If you’re dying to know what the prototype shown above looks like with a regular exhaust and painted all black, you can click here to check out the spy shots. If you want to see more of the 790 Adventure R in action, you can check out Chris Birch thrashing one around in the video below.