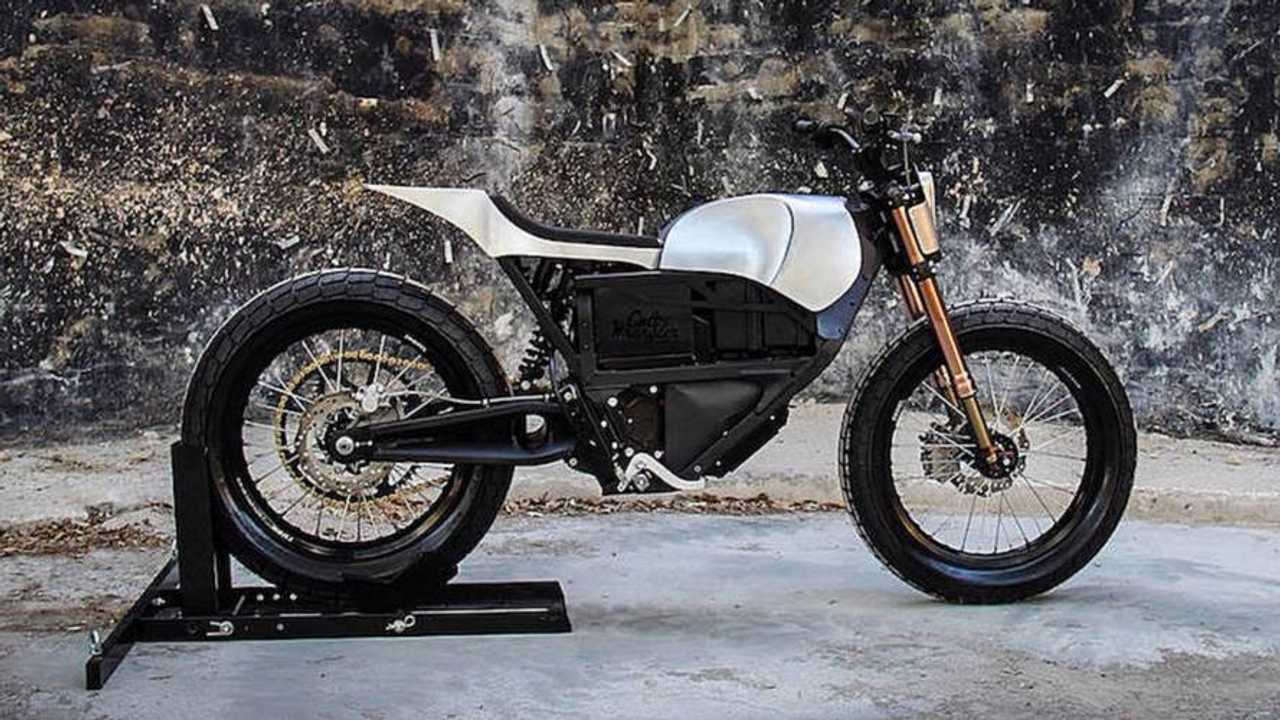 As electric motorcycles become increasingly popular, more and more custom builders are shifting their attention to electric powertrain bikes for the first time. Though electric customs lack the mechanical heart that typically serves as the centerpiece on a motorcycle, several talented builders have been able to churn out some genuinely impressive customs using electric donors. A little while back we featured Alta’s vintage drag-racer build called “The Crapshoot”, and now we present an equally interesting Zero XU-based tracker custom from Colt Wrangler Motorcycles.

This tracker build was a product of Colt Lyons who heads up the Mason, Texas-based Colt Wrangler Motorcycles. A former rodeo competitor, Lyons has built more than a dozen custom bikes over the last three years, working with everything from big bore American V-Twins, to nimble, vintage, Japanese mounts. Like a lot of today’s prominent custom builders, Lyons is completely self-taught and has picked up the skills needed to produce one-off bikes along the way.

This particular build got its start when a customer inquired about having a bespoke electric project commissioned. Lyons says his initial thought was to turn the donor—a 2013 Zero XU—into a full-faired cafe racer, though after riding it around a bit, he opted to go with a tracker style build. With the frame weighing just 17 pounds, the power plant making 42 foot-pounds of torque, and an overall curb weight of around 250, Lyons felt the Zero could make for a decent dirt oval racer, and not just aesthetically.

Upon tearing down the donor, Lyons discovered that the XU possessed what he describes as “some really great minimal components”, prompting the Texan to leave the machine as is mechanically, aside from swapping out the rear-wheel which was replaced with a spoked unit from Buchanan’s Spoke & Rim.

Lyons drew up the design for the project’s bodywork before hand-cutting and shaping the aluminum panels that make up the build’s one-off (faux) tank, tail-section, and front-end cowl. The new tank now houses several electrical components—including the bike’s digital instrumentation which sits flush in the faux-fuel-cell. Lyons had reportedly never worked with shaping sheet aluminum, though you’d never know it looking at the completed product.

Because the remaining elements of the Zero were already wearing a factory coat of black, Lyons opted to leave the blacked-out bottom half as is, pairing it with raw brushed aluminum up top for what the builder calls “the perfect contrast”. As a whole the bike has a very sleek, tidy, and modern appearance, boasting a number of contemporary touches over the traditional flat tracker visual theme.

Lyons explained that he was at first hesitant to tack on a headlight/number plate combo on the front end on account of how common they’ve become, but in the end decided to put his own twist on it, resulting in a vertical LED unit sitting offset to the left. The custom front-end lighting and its housing are composed of four different pieces of aluminum which reportedly took Lyons severals days to piece together. The actual LED unit stashed inside the aluminum structure is actually an aftermarket, flush-mounted truck bumper light, though it works surprisingly well in its new application.

Even without a gas engine on display, Colt Wrangler Motorcycles' Zero tracker still looks the business

Other small elements were also added to complete the build such as custom foot controls, new grips, a new set of tracker handlebars, a custom seat cushion, LED bar-end signals, and several other doodads. The back of the tail-section—which Lyons says is a blending of tails off of flat trackers and superbikes—was capped-off with a small mesh cutout that hides a pair of round tail/brake lights—only visible when lit up.

There are several elements of this build that I find particularly impressive. First off it’s pretty amazing how transformative of a build this is despite so many stock components going untouched. Second, the completed bike sports a very complete appearance which is harder to pull off than it looks considering Lyons built this thing around a couple unsightly black squares (the batteries) instead of a muscular-looking gas engine.

For more info on Colt Wrangler Motorcycles you can click here to check out the shop’s website.