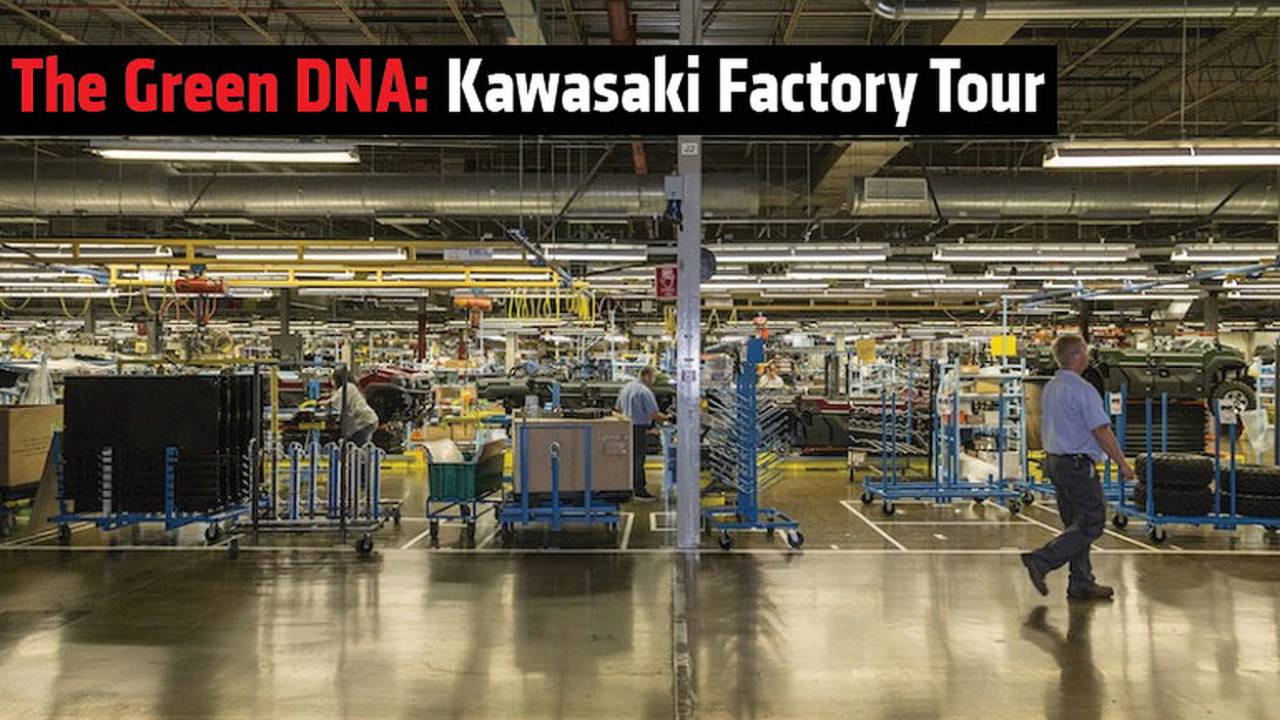 We toured the Kawasaki Factory in Lincoln, Nebraska and couldn't believe what the powersport company was getting into.

Kawasaki is an interesting company in terms of how they got into motorcycles and powersports vehicles. Considering in 1897 Kawasaki built ocean going ships, in 1911 they built locomotives, eleven years later their first plane, and it wasn't until 1969 that they built their first motorcycle. Talk about downsizing your production. The Kawasaki factory currently houses assembly lines, robotics, heavy equipment loaders, gas turbines and more.

Kawasaki first opened their Lincoln, Nebraska location in 1974, which makes 2014 their 40th anniversary and the very reason the launch of the new MULE was held here. This facility is the first foreign vehicle plant in the US, beating Honda, Toyota, and BMW. As much as many brands talk about their heritage of producing vehicles in the US, Kawasaki outdates them all. The first product to leave the factory was the Kawasaki KZ400 motorcycle. Not to mention the first ever personal watercraft, the first ever production utility vehicle, and has produced more than a whopping 3.2 million vehicles in total. With 1900 full-time personnel, around 1500 of which are permanent while the remainder is composed of 400 seasonal contract workers. 111 employees have been bleeding green and black for more than 35 years! Even more impressive is the fact that five people have worked at the Nebraska plant since day one. Despite the turmoil through the decades, this is a true testament to how well Kawasaki takes care of their people and the pride that the people of Nebraska have for what they are building.

Kawasaki designs, tests, conducts research and builds all of their side by sides at the Lincoln facility. One thing that makes this factory a little different than most is not only do they build the machines you and I can own and ride, they build the very machines that make them. From precision robotics to massive 3000 ton press' that form the PWC fiberglass bodies. All of these machines are made by Kawasaki. It makes bringing a new product to market or redesigning a process simpler. Kawasaki answers to itself and any delays are inside and are within their control parameters. The vehicles made at the plant are not just assembled here, the frames, the motors, the wheels are all made right there in Lincoln. Kawasaki may be a Japanese company but it certainly has deep roots here in the US and has made a home in Nebraska.

Below is an example of their Hydro Graphics process. It's a water based application of graphics to any surface. It's very durable and capable of adhering pattern designs on nearly any complex surface. Once coated, they are put through an oven to cure the finish which gives it that authentic painted finish.

Kawasaki even produces railcars and I had the privilege of touring the facility where production takes place in a separate building. They do not use traditional rail tracks that would force them into one static configuration of their production facility. They do, however, use an brilliant air jack system with small tow attachments that allows two people to move an 85 foot long rail car anywhere they need it. The jacks are like an upside down air hockey table creating lift from pressurized air. In order for this to work the floors are constantly cleaned and are made of a very smooth finished concrete. While maintenance intensive the ability to reconfigure an entire facility at a moments notice is worth the additional attention to detail. There is also an on site test track to allow for thorough testing and transportation of the cars to their shipping yard which can then be shipped anywhere in the Continental U.S. The cars shown here are destined for service in the Washington Metro and New York subway systems.

I was amazed by the people at Kawasaki and how they take pride in not just what they were making but how they made it. Everybody pridefully cleaned up after each job, they happily lent a helping hand to each other and you could feel they all wanted to do the best job possible. A Japanese company and American workforce working together to create quality products for the global economy, all right in our own backyard. This is what the future of a great American success story is and has been all about for both Kawasaki and it's workers.