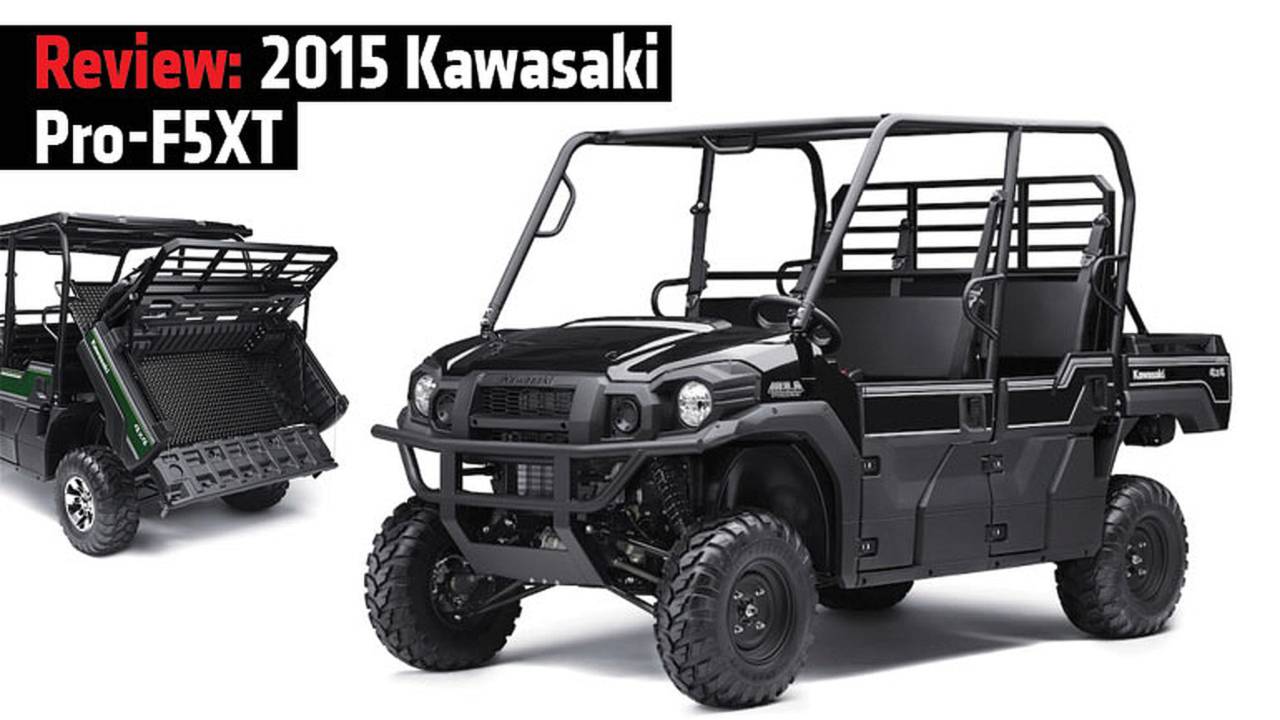 This past week Kawasaki invited RideApart to sample their latest and greatest side by side UTV at their factory in Lincoln, Nebraska. Kawasaki was anxious for us to experience their new MULE featuring the exclusive new Trans-Cab. Which allows an individual to transform the cab from three person seating to six person seating in under a minute. There is a lot more going on with this new Mule than just some fancy seating adjustments.

Kawasaki's new MULE PRO-FXT is the fastest and most powerful MULE they have ever produced. Dubbed the all new "King of Mules" the MULE PRO-FXT is faster, more powerful, can haul more and tow more than any other MULE in history. With a 16-foot turning radius it is also one of the most maneuverable side by sides made. Which is aimed squarely at the Yamaha's Viking VI. It has an 18-foot turning radius for the same six passenger capability without the ability to change the seating.

Features at a glance:

I could spend the rest of the day talking about how many gallons the gas tank holds, how the doors attach, or what the paint color options are. I would rather tell you how it works when you drive it.

We had our choice of mounts and I decided to drive the Camo model for most of the day. Later I regretted going for a cool look and not picking one with the optional sun shade top. Without it, the black seat is roughly the surface temperature of a meteor about to be plunged into the the sun.

Getting into the MULE is a simple affair. The door opens with an intuitive flip handle, it's accessible only from the outside of the vehicle. The first thing you notice when you get in the MULE is that the seat is surprisingly comfortable, I didn't slip around on it and although just a simple bench seat you could ride there all day long. Some sort of bolster would be nice for the really rough terrain but after a day of driving the MULE I wasn't sore or strained from being thrown around. The steering wheel is placed at a comfortable distance from the drivers seat, within easy reach but with enough space for a larger person to fit with no issues. The pedals sit in a foot well with plenty of space for even my size 13 shoes. This is particularly important when your clientele will be professionals and ranchers wearing large boots every day all day. The steering wheel does telescope for some ergonomic adjustment but was not as easy to use as a car adjuster. Once you get used to the idea of trying to tear the handle off to get it to move, it becomes second nature. The mechanism will definitely hold up to the abuse and long term wear and tear.

The MULE uses a safety on start up. Like pulling in the clutch on a motorcycle the MULE requires you to depress the brake pedal to get it to start. When you first turn the key there is a brief diagnostic cycle and then you are ready to go. There is no park on the speed selector lever. You have high, low, neutral, and reverse with a parking brake located in the dash to the left of the steering wheel. This is a pretty nice design choice as it is the last item you see when exiting the vehicle and a nice reminder to set the brake. Once started hold the foot brake, select your drive mode and when ready hit the gas to go. Not much harder than your standard golf cart but certainly more technologically advanced.

Driving the MULE around is remarkably easy. The EPS makes controlling the MULE a dream. I will stop short of calling it sports car like, but the progressive control is superb. The faster you go the less assist it provides. Making low speed maneuvering super easy with maximum assistance and keeping the steering really light, while at speed it stops assisting allowing a more natural feel at the wheel minimizing driver input. This is really appreciated over bumpy terrain where input is always being put into the wheel from trying to hang on. Due to a combination of a front differential and rear engine design the front tends to understeer when pushed hard. I did notice that running in 4WD gave a more neutral handling allowing me to really push the MULE into the turns and keep it tracking on line. The front differential is noisy due to straight cut gears versus helical cut gears in the rear. Kawasaki told me this was by design and that they felt the noise would not be an issue for most users. I won't disagree completely, but it seems short sighted not to be consistent. If you only use the 4wd occasionally it won't be an issue but if it's a high use item it will get annoying quickly.

The 3 cylinder engine is one of my favorite designs. That combination of higher RPM and low end torque is so versatile, not too mention 3 cylinders just sound good. The MULE used that power to reach an indicated 45 mph while carrying 6 bales of hay on flat ground. I am certain I could have gotten another couple mph out of it with some more space. I drove up 45 degree hills, around trees, and through ditches with the pay load.  The best compliment I can give is that I didn't notice I was carrying any of that weight once. It did not change the handling, the balance, and most importantly the braking. I drove for 4 hours, running up and down hills, idling while waiting for people and photos and the gas gauge did not budge. This is a very efficient as well as powerful motor.

I just mentioned the brakes and I wanted to talk about them a little further. They are motorcycle style calipers mounted interior of the wheel hub and spindle assembly. This protects them inside the wheel from debris and allows for a larger diameter rotor. They were a little noisy when they got dirty but never once failed to feel progressive, provide plenty of power, and stop exactly when I needed them to.

The most unique feature is the new Trans Cab. There are 2 latches, 2 levers, and a folding rear seat to make the entire vehicle go from 3 to 6 passengers and over twice as much hauling capacity. The entire process, after seeing it once, can be done in under a minute by one person. No tools, no gimmick, no bull.

My problem is this, so what. Is it really that useful? I tried running scenarios to answer just that question. Here is what I came up with. Take a bunch of buddies hunting and then need to collect firewood or bring the elk back to the cabin to dress it. Sliding the cab around to fit more wood or a large kill is very useful. Move 6 guys to the job site and then haul all of the material, tools, excavated rock or dirt at the job site all day. Switch it back and 6 guys go home. There is no other side by side that can do that. That's the so what.

Is it the fastest or most powerful? No. It is possibly the best one size fits all? Maybe. If you have the need for this kind of versatility, it is the only choice. One other factor is that using the new MULE PRO-FXT saves money versus having to buy more than one side by side to do various jobs.

Final verdict. I like the new MULE PRO-FXT. It's not perfect. I would lobby for a different front gear that was quieter. There is a slider on the seat belt designed to hold the last used position, that would be cut off after about 10 minutes of owning the MULE. Most useless feature ever put on a seatbelt. The thing about this new MULE, there are really no real complaints and it does everything well. It's even  a lot of fun to thrash about off roading in the woods. Well maybe one more complaint. The base model retails for a bit over $15,000, with final pricing to be announced, making it a stiff asking price. I guess that's why Kawasaki said it's for professionals, ranchers, and hunters.