Amber Arbucci is a wildlife photographer and model. She also rides around Los Angeles on a Yamaha R6. We took her out for a slice of pizza and talked bikes.

Amber Arbucci is a wildlife photographer and model. You may have seen her in ads for Victoria’s Secret or in the pages of GQ. She also rides around Los Angeles on a Yamaha R6. We took her out for a slice of pizza and talked bikes.

RA: How’d you get into motorcycles?

Amber: I was born in Newport Beach, Florida, very close to Daytona. They have the bike race there annually and I was always brought to bike week. I got very used to being around motorcycles and just fell in love with them, even just the sound they make.

RA: Is that why you started on a Harley?

Amber: Yes. My sister married a motocross racer, but I was more into cruisers, so I got a Harley. You’re not going to be racing around on a superbike in Miami anyway, it’s obnoxious. So I rode that Harley Sportster 883 for a while and now I ride superbikes. 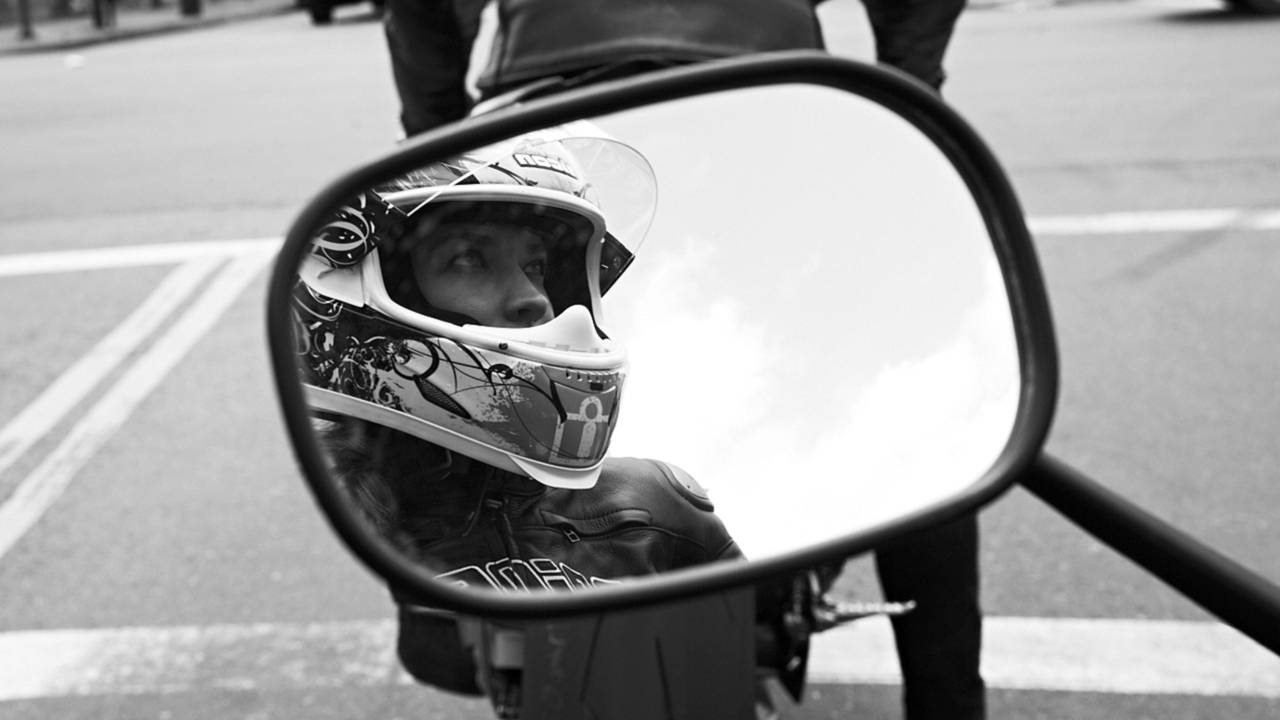 RA: What prompted that transition?

Amber: I rode my friend’s R1. I was so impressed with the power, it was like being pulled by gravity.

RA: When did you move to LA?

Amber: Like two years ago. Then I got the R6 a year and a half ago.

RA: Have you done anything to grow into the sport, any schools or anything?

Amber: Last summer, my girlfriend and I rode up to the MotoGP in Monterrey.

RA: Which route did you take?

Amber: The shady route, up the coast and through the mountains. 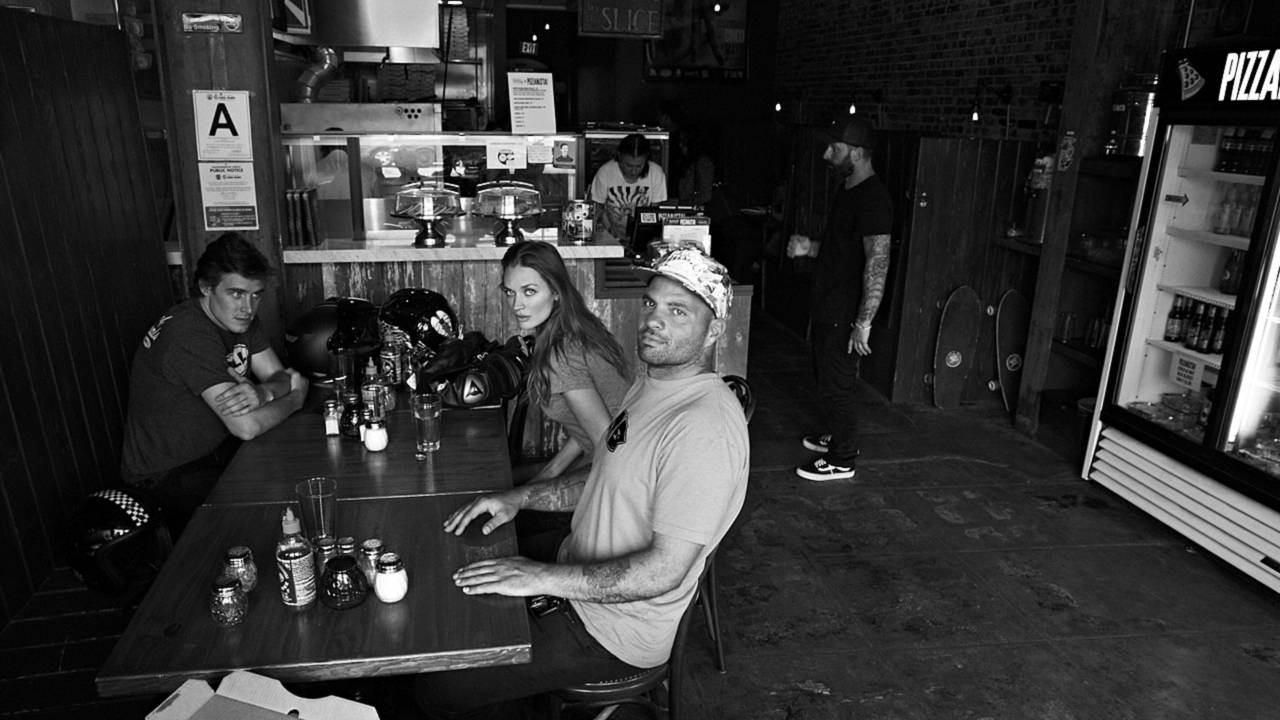 Amber: Most women who do ride, ride cruiser bikes. Superbikes are so much more fun. Why do people like me not ride? Probably because they’re too busy modeling.

RA: But girls in general, they don’t take it up.

Amber: Girls in general are fearful of a lot of adventurous things. I didn’t have a lot of girlfriends growing up, I was more of an adventurous type. 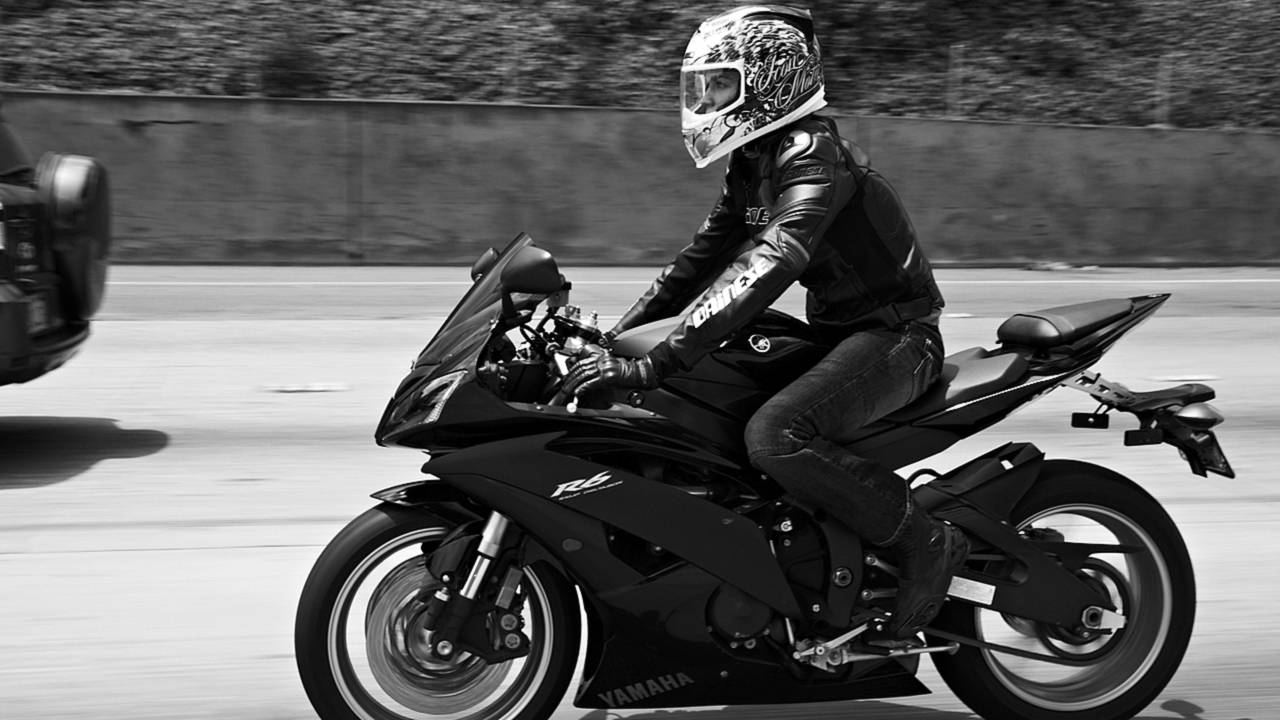 RA: Do you friends try and encourage you not to ride?

Amber: Every single one of them, except for the ones that ride too. Those guys have been in really bad wrecks. I don’t want to wreck, of course, but I also don’t want to get my leg bitten off by a shark either. If you’re passionate about something, you have to take risks.

RA: Tell us about the shark thing.

Amber: People are starting to recognize me as the shark girl.

I got into shark diving about seven years ago and started taking their pictures. On my second dive ever, I was in the water with Tiger and Bull sharks, without really knowing how to scuba dive. It was intense.

The next dive I did was with Great Whites. I was the second woman ever to do that without a cage. Smallest shark I swam with was 16 feet long and the largest, 21 feet. That’s half the size of a humpback whale. You just gotta show them who’s boss and they’ll leave you alone.

RA: What kind of riding do you do here in LA?

Amber: I ride the canyons. I got a photo posted on The Rock Store two Sundays ago.

I’d like to do track days, but I can never make it because I have so many photo shoots. 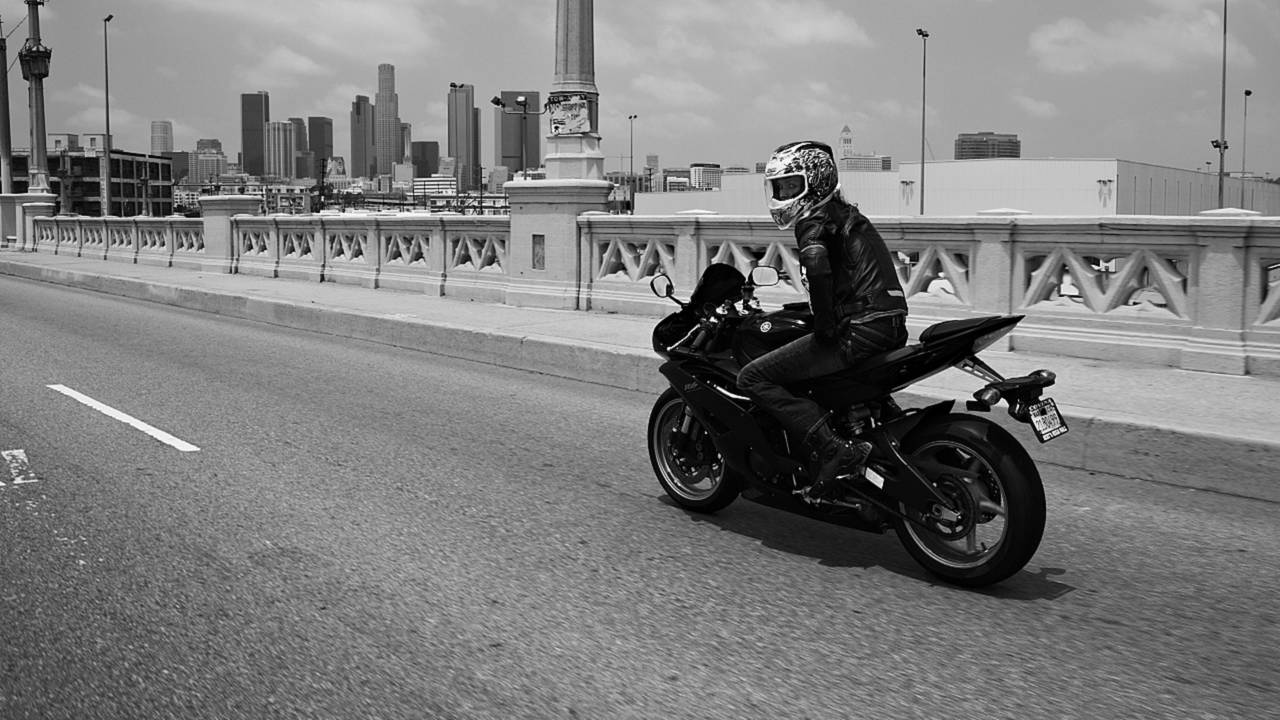 Amber: I have two cars and one bike. A custom ’72 Bronco that’s matte army green, with big black tires and a bikini top. And I just bought a Fiat 500; the Bronco isn’t conducive to normal car stuff, that’s why.

RA: Now that you’re riding regularly, do you find yourself choosing the company of bikers over normal people?

Amber: Yeah, for sure. If I see someone has a bike, I know we have something in common.

RA: You’re an angel investor too?

Amber: I was an investor at Uber. I helped with their marketing and commercial campaign and got double the shares in the company.

RA: How did you get into that?

Amber: Back when Brad Koenig was the biggest male model in the world, he showed me how to trade stocks. I was hooked.

I invested in Elon Musk’s first company at $30 a share and tripled it in a few weeks. A few days ago, I bought into his other company, SolarCity. Those shares are up 27 percent. Anything this guy’s behind. He always protects his interests and always figures everything out ahead of time.

RA: How’d you get to the point where you could become an investor?

Amber: How did I get the money? Modeling. And, the last few years, I’ve been selling my photos, which has really taken off. I never thought I’d get to the point where my art would sell, but I risk my life to do it and now it’s paying off. 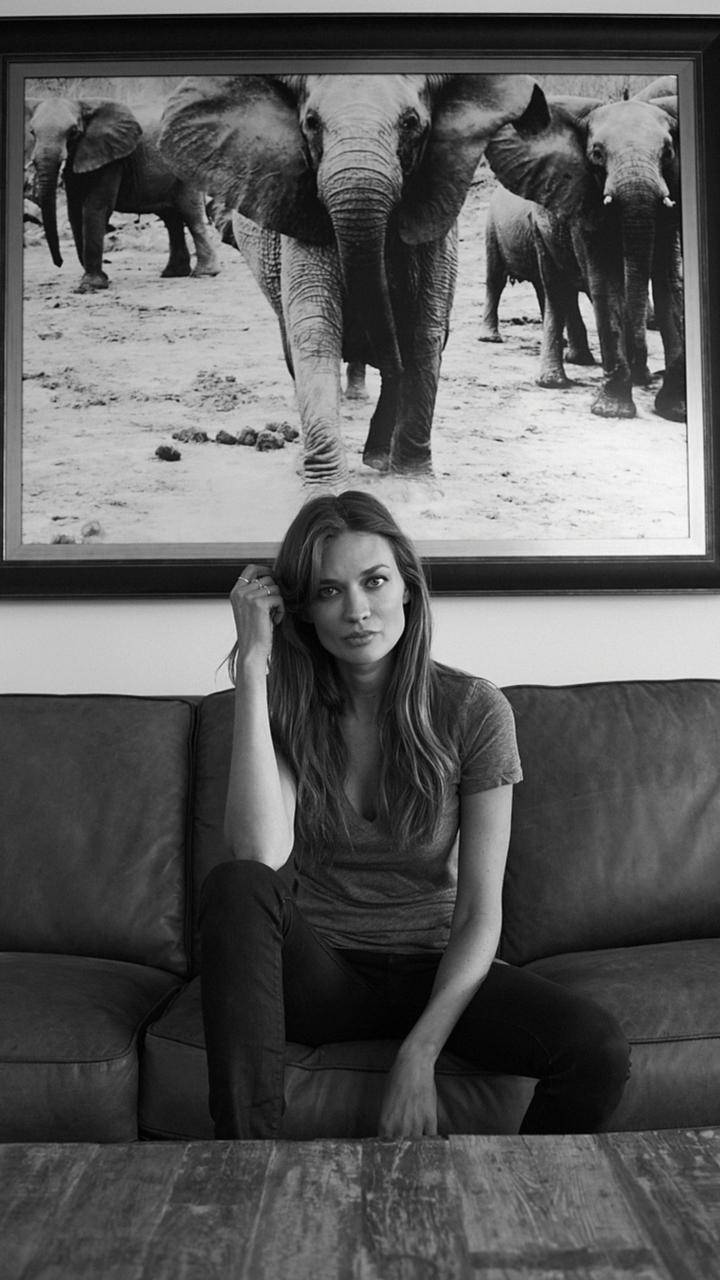 Amber at home, sitting below one of her photos.

RA: What’s the fascination with animals?

Amber: I remember my first dream, I was swimming with whale sharks. To this day, I dream about animals five out of seven nights. I don’t have sex dreams. I grew up in the country and we had pigs and dogs and alligators in the backyard.

I’ve always been fascinated with African animals and I got to the point with modeling where I could go shoot them. Then, I’d miss modeling shoots because I was in Africa taking photos. I can die happy right now because I’m doing what I’ve always wanted.

RA: When did you start modeling?

Amber: I started quite late. I graduated high school at 16, studied medicine in college and assisted at three different hospitals with surgery. At 21 I left home and started modeling, but I’ve kept photography and art at the forefront and now I’m living my passion and trying new things I haven’t done. My next thing is to dive with hippos. No one’s ever done that before, but I’m going to go and shoot photos.

RA: Holy crap. The water must be very murky….

Amber: The water is brown, but you can still see the hippos. I know what I’m doing.

I’d rather die riding a motorcycle or shooting animals than doing something boring. 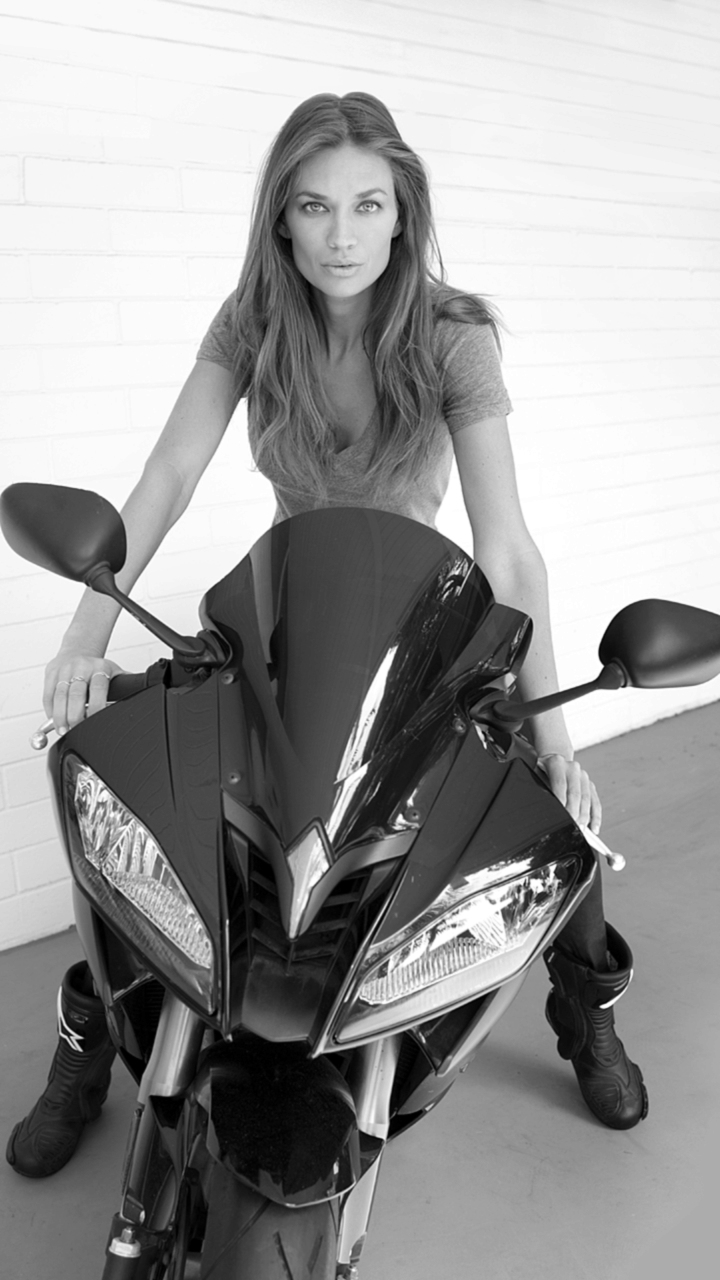