Want to Race Bonneville? Everything you Need to Know Before You Go 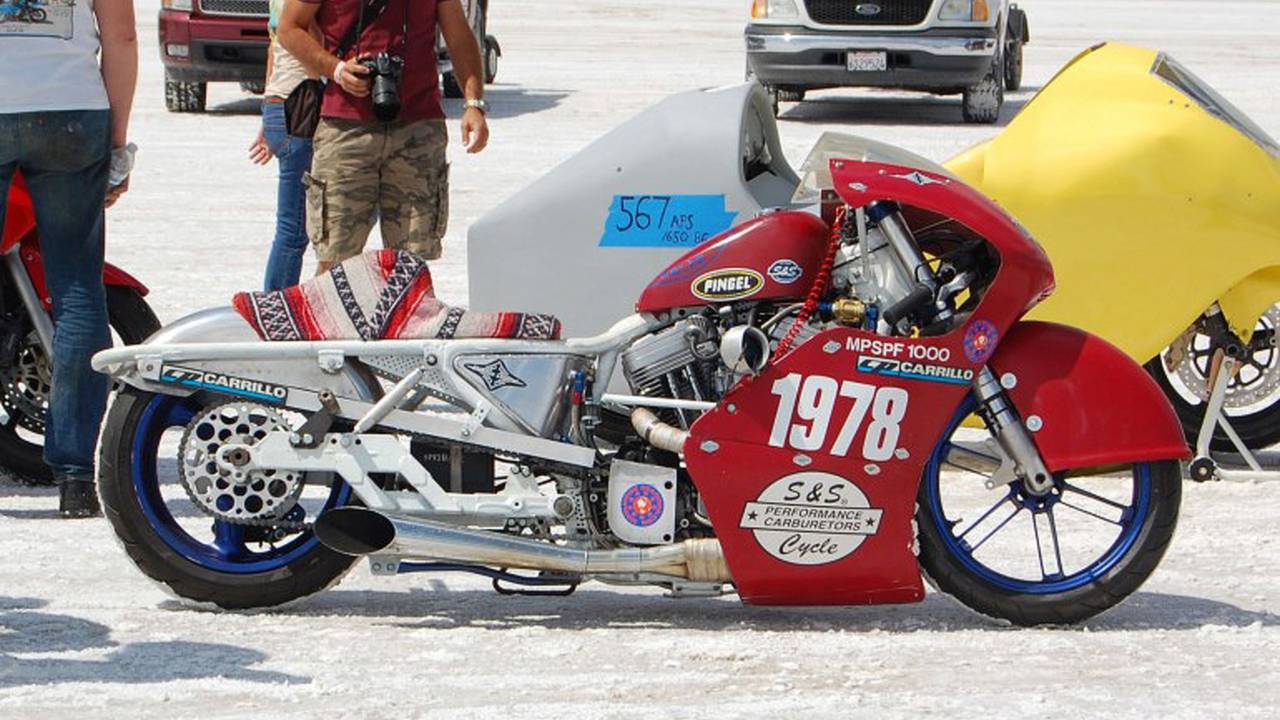 We’ve offered a number of items here at RideApart in the recent past on amateur motorcycle racing.

For example, check out:

These articles say a lot about the avenues available to riders interested in amateur racing. This time around, we’ll zero in on motorcycle land speed racing at Bonneville to follow our piece on registration for participation in the event. The 2015 event runs from August 29th to September 3rd.

Bonneville is the citadel of speed—promoted as the fastest race course in the world. It's the place where world and national speed records are set and legends are made.  The fastest cars, trucks, bikes and one-off custom speed machines in the world compete there.  Just going there and standing out on the vast expanse of rock hard sodium chloride is memorable; to take a machine out there and run it on the salt, well, that may well be the experience of a lifetime.

Perhaps the most interesting feature of the Bonneville Motorcycle Speed Trials is the “Run Watcha Brung” part of the event. That's your chance to take your everyday rider to the legendary Salt Flats to take two runs on the competition course and have them timed. You can’t qualify to set any records, but the cost is lower than record runs and you’ll have a ride you’ll never forget to tell everyone about. It’s also a great way to get the feel of running on the salt surface so that if you decide to give a record run a shot sometime, you’ll have some experience with it.

Though the rules aren’t as involved as those for record contention, you’ll still need to know how to prepare in terms of your bike and riding gear, so check out the Bonneville Motorcycle Speed Trials website for more information at:  http://bonnevillespeedtrials.com/ and click on the “Rules and Records” tab.  As I write this, the 2015 Run Watcha Brung rules aren’t on the site just yet, but the 2014 rules are and those will help you get an idea of what is required. Keep checking back though because you’ll need to go by the 2015 rules if you want to participate.

To run for AMA National Speed Records, you must be an AMA member and follow the rules for competition, including the supplemental rules for land speed racing. Check out membership costs, benefits, and competition rules at:  http://www.americanmotorcyclist.com/

Getting to Bonneville is easy: Just stay on I-80 from either west or east until you reach Wendover, UT, and you’re there! West Wendover, NV is a twin-town with the state line dividing what seems to be more or less one town, but you’ll know when you’re in Nevada—West Wendover has the casinos and bright lights.

Because of the casinos, West Wendover has a lot of lodging and restaurants to offer, but Wendover, UT, has lodging and other accommodations as well, including the Western Ridge Hotel where motorcycle speed record legend Burt Munro is depicted as staying in the movie “World’s Fastest Indian,” and where scenes for the movie were set.

The Bonneville Speedway is unlike most any other motorsports venue in the world.  There is no permanent infrastructure at the track except the salt surface. Virtually everything required to stage an event must be hauled out on the salt at the beginning and hauled off the salt when it’s over.

The salt is fragile and vulnerable to contamination and damage, despite being hard as rock in most places. The entire salt flat is under the authority of the Bureau of Land Management (BLM). To protect this wondrous natural resource and competitors’ access to it, there are some unique requirements, for example:

When you arrive, after you clear the entry gate, you’ll be directed to the general pit area.  Give yourself and your neighbors in the pit some space, too—there is a lot of room out there.  Set up your pit; put your tarp down, set up your chairs, sun shade or EZ-up, get your paperwork ready for registration (your pre-event registration packet will include a list of what you need to bring), double-check your gear in preparation for “scrutineering.”

There's no competition on registration day, only paperwork and tech inspection known as scrutineering. The lines for both move quicker if you’ve made sure you have brought all the necessary paperwork, filled it out and have gone through your bike to make sure it complies with all the necessary requirements. Once you’re on the salt, the event staff (mostly volunteers, by the way, so laying a big “thank you” on them is always appreciated) are very helpful with helping you get oriented to where each step takes place.

Once you check in at registration, the next step is to bring your bike and all your riding gear to scrutineering for inspection. The bike, your helmet, leathers, boots and gloves will be checked to make sure it all meets the requirements found in the rulebook.

Some of the more common mistakes I’ve seen hang people up in scrutineering are poorly installed or ineffective steering dampers (required on all bikes), poorly installed or missing safety wiring, or even number plates that don’t meet installation and lettering size criteria.

Once you get through scrutineering, if you are running in a pump gas classification, you can push your bike over to the on-the-salt fuel vendor to get a little gasoline. If you run your bike on anything but pump gas, which must, by rule be purchased on the salt, you are in a “fuel” class.

So, if you plan to run in a gas class, you must present your bike with an empty fuel tank.  After you fuel the bike, the tank will be sealed with tape and fingernail polish so that nothing but the gas you just purchased can be in the tank. If you need more gas later in the week, you’ll need to have the tank unsealed by the event staff and re-fueling done the same way as the initial fueling. All this makes sure nobody running in the gas class has anything but the same gas as everybody else.

That’s pretty much the lay of the land for day one, unless a driver’s meeting is held. Be sure to attend any driver’s meetings and having your support and pit crew, if any, attend as well is a good idea.  Listen with both ears and minimize any conversations until the meeting is over, including the Q & A at the end.  Track conditions, rules reminders, event scheduling, track operations (such as how and where to enter and exit the course), safety information and the like is covered at the driver’s meeting.  There will generally be a driver’s meeting first thing in the morning on the first day of competition—day two of the meet, so be alert to the call for it and attend.

In our next installment, we’ll cover key items of bike prep, safety gear and what happens on the salt once the fun starts.