Kate's 12 Lessons Learned From Traveling CluelesslyBack when I was 15, I joined the downhill ski team at my high school. I did all the dry land...

Back when I was 15, I joined the downhill ski team at my high school. I did all the dry land training, which was so hard. To this day, just thinking about it makes me want to vomit. I got fitted with proper skis and gear, and on the first day on the mountain, I tapped my coach's shoulder and let him in on a secret: I didn't know how to ski. But by the end of the season, I was knocking down gates.

I have lived much of my life like my ski racing career—cart before the horse, dessert before dinner, R1 before R6 and R3—motorcycling is no exception. Within a month of learning how to ride, I got on an airplane to London and hopped on a Bonneville in Hinckley, UK. I then rode to Austria only to return to London with my tail between my legs on another airplane. But I didn't give up riding.

I had just bought a Honda Hawk NT650 and was working at Intersection as a Fashion Editor. With only a couple hundred miles of riding under my belt, a fabulous idea happened:

"Fashion editor rides from shoot to shoot across Europe styling other women riders in their native countries on bikes from their native manufacturers wearing clothes from designers of said country."

In hindsight, it was just a gimmicky mouthful. An example would be Helga on her GS1200 wearing Hugo Boss, ja das ist wunderbar. But like most half-baked ideas, it wasn't wunderbar and with only a week of planning, it's still amazing what we did accomplish. 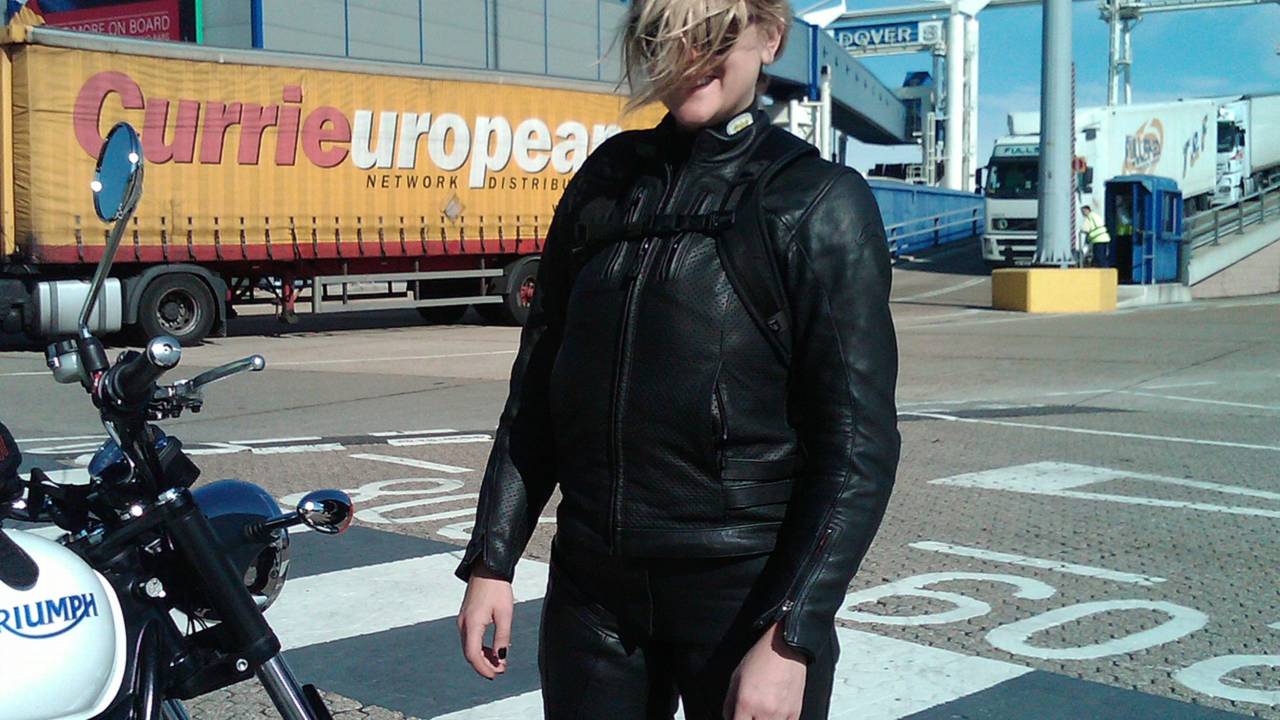 First off, what would I ride on to these shoots? I looked into shipping my 1988 Honda Hawk to London from NYC, which would cost more than the actual bike itself. I researched buying a bike in London, but that turned into a bit of a wild goose chase. My editor Bjorn and I reached out to Triumph, who after a little bit of coaxing, allowed us to borrow two bikes. So Bjorn and I took a train up to Triumph's factory in Hinckley and picked them up.

I got a Bonneville and Bjorn got a Spirit. We proceeded to ride to London, and Bjorn, who is from Germany, pulled me over half way and gave me a stern talking to.

"If you overtake people from the slow lane on the Autobahn like you are doing now, you will die."

Bjorn is one of the most sarcastic people I ever have met, and at this moment, he had not a trance of sarcasm in his eyes, voice or ironic beard. He was serious and it was that moment in which I thought to myself, "what the fuck are you trying to prove Kate?"

Lesson 1. Don't ride like a jerk. But it was only a moment and my shriveled balls returned to their ginormous dimensions. Although, I did have a few more brief saving graces of sanity that I would experience on the trip.

Bjorn was supposed to ride with me at least to Germany. We had a shoot a day and a half away with BMW in Munich, but the "higher ups" thought he would be better served managing the shoot from the ground rather than riding with this novice (me) across an unfamiliar continent. So I was left to my own defenses. 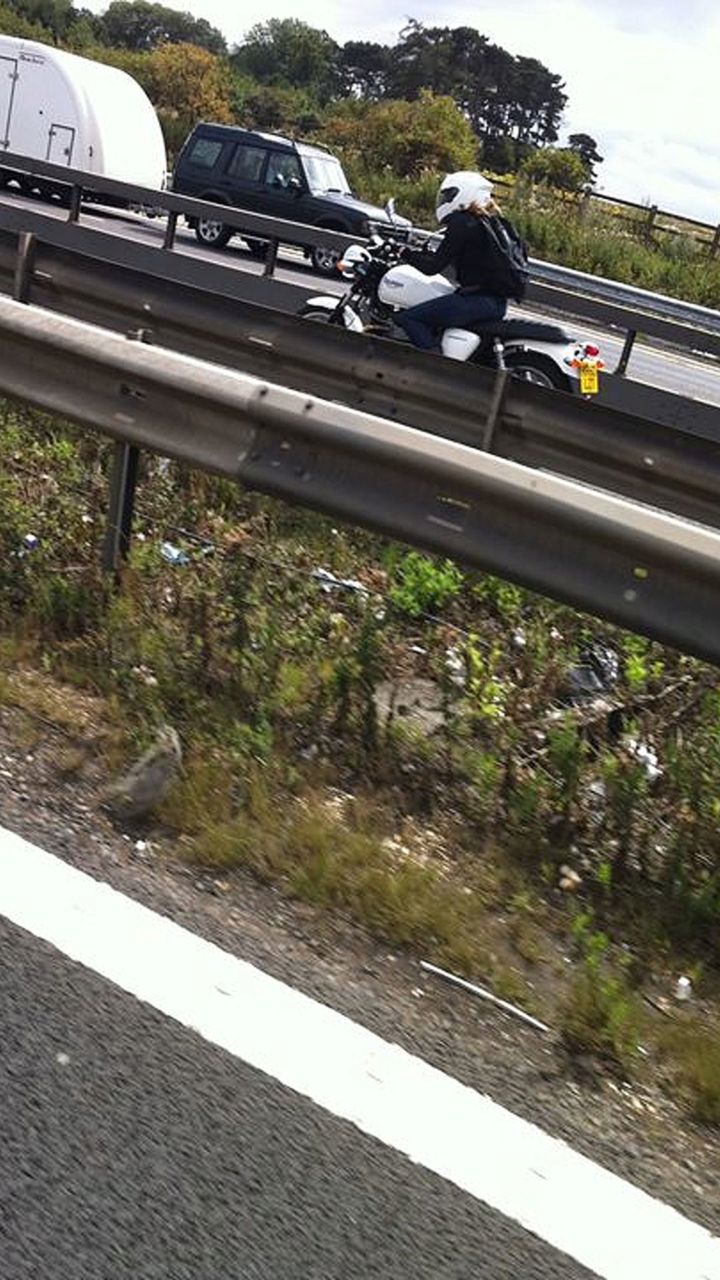 In what was typical for me, I packed in a hurry, shoving random clothes in a bookbag. I wore a full leather two piece suit, a full-faced helmet, and carried an extra pair of gloves, an ipad, a Blackberry and a toothbrush in a tankbag. What I brought is inconsequential, because it's what I didn't bring that is more important: I didn't bring a GPS or any Euros.

Lesson 2. Bring a GPS and money for whatever country you're going to. Also, somewhere midway to the Dover ferry from London, I saw a light colored object in my mirror. It was my doc kit. My bookbag had unzipped and most of my clothes had spilled onto the M20.

Lesson 3. Zippers down and keep important things on you, or at least, in a tank bag.

At this point it was late afternoon and I had to wait for a later ferry, which was fine. But it would mean that I would get to France in the evening with a low tank. I thought, no problem - ya right.

Lesson 4. If you aren't tracking gas stations, fill up at any moment possible. After arriving in France, I went a bit before turning off the E40. The vast fields were breathtaking. It was Monet everywhere, and I pulled up to a small village where my mere presence was the most exciting thing to happen all year. A man on a 10 Speed eating a croissant, wearing a Le Tour jersey lead me to the gas pump after I spoke to him in very very bad French. I also had to speak to him using non universal hand signals (basically jazz hands).

Lesson 5. Learn the basics of the language you are traveling to. The pump didn't take my card and all I had was £s (remember lesson 2?) It wasn't a station, but a pump with a credit card reader.

No one spoke English and no one could understand my French. I finally found a person who would take my £s, and she started pumping. I was overjoyed for 10 seconds until I saw that she was pumping Diesel.

Lesson 6. Always pump your own gas. I stopped her and knew that I was going to leave with a bad taste in my mouth. By now, I was drawing a crowd. I had already been trying to barter my pounds for about a hour or so and now I had to ask for a hose. The very kind folk of Nord Pas De Calais got me a hose, and I began to suck the diesel out of my tank.

Lesson 7. Bring tools and go ahead, bring a hose.

Once the diesel was out of the tank, I was ready to get proper gas. As luck would have it (this being such a common phrase in my moto hijinx), a multi-linugal traveler pulled up fresh from the ferry. This gentleman and his daughter filled up my tank, and in return, I suggested we drive to Brussels together so I could pay them a drink and cash. Brussels was a good spot between both our journeys.

We had a coffee and chocolate in the main square. We toured a bit and they showed me the little boy who saved the city by pissing on a bomb. I would have really liked to see more on the trip. This leads me to...

Lesson 8. Give yourself time and extra time. I had to carry on and ride in the heavy rain. It didn't stop raining for the rest of my trip except on shoot days, ironically. 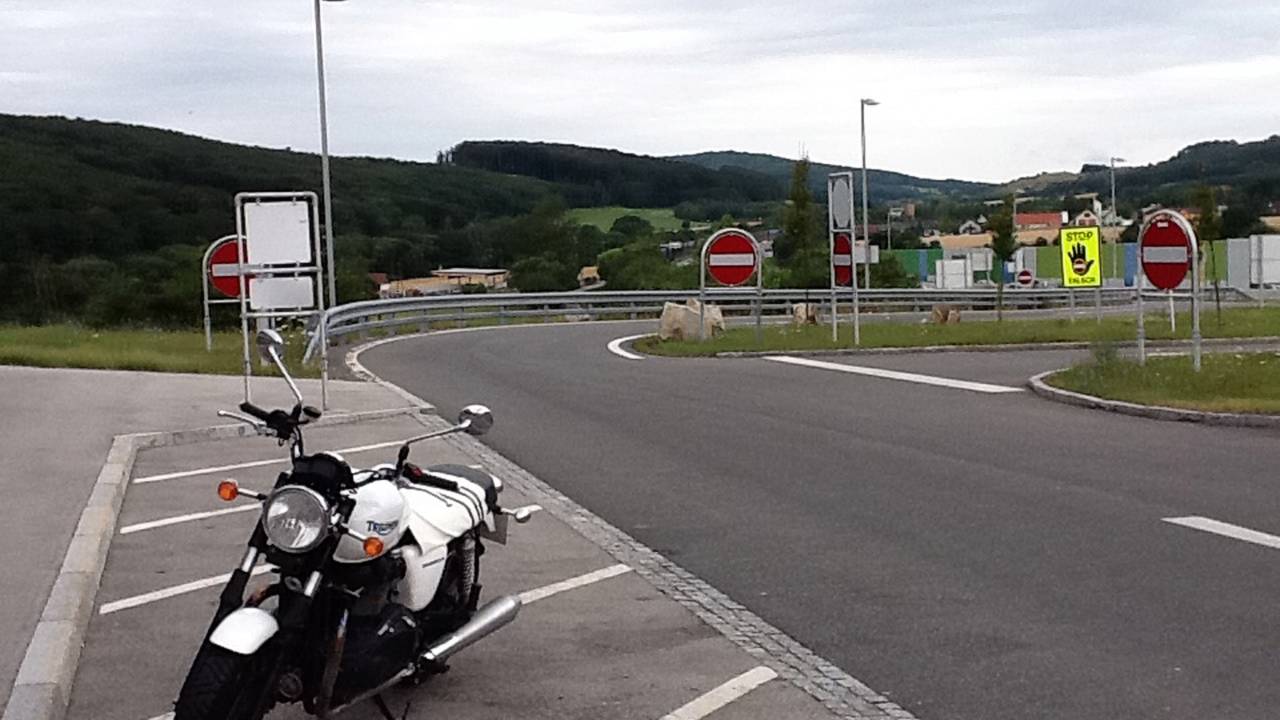 It was late at night when I arrived at the BMW fleet house in Munich to pick-up the production car for the shoot. I was soaking wet (as always), and I saw that the guard was eating the same gummies as me. This had been my staple diet for most of my stay in Europe: bread, cheese and gummies since I was a vegetarian during this trip.

This leads me to Lesson 9. Bring food, bring good food. Riding takes energy and you don't want to constantly be crashing—so eat well.

It was interesting to be in a DRY vehicle, but it was disorienting. I mistook a footpath for the driveway of the hotel and was about to drive over a walking bridge. Perplexed and puzzled by my new proportion, I finally got to rest. The next day, the BMW shoot went well, except for the end.

Lesson 10. Cobblestones and sportbikes are not friends. In fact, most bikes don't care for cobblestone.

Originally, I was supposed to go to Austria, then Milan, then Paris and back to London. But vaguely planned adventures never go smoothly. I made it to Austria and as I passed over the border from Germany, I felt a difference immediately. The roads were noticeably more bumpy, oily, and the drivers were not like the methodical Germans.

I arrived in Wels, Austria for my next shoot, but had a strange feeling. In the middle of the night, I awoke to loud voices. I thought nothing of this—just drunk people—but I remembered that my bike was out front of the hotel. I went to the window only to find two guys kicking the shit out of another man who lay lifeless with his shirt half-off. I saw his stomach muscles protruding and pulsing like some sort of alien escaping roadkill. I ran downstairs to get help and not a soul was around. I went outside, but by then, some passing motorists had stopped. 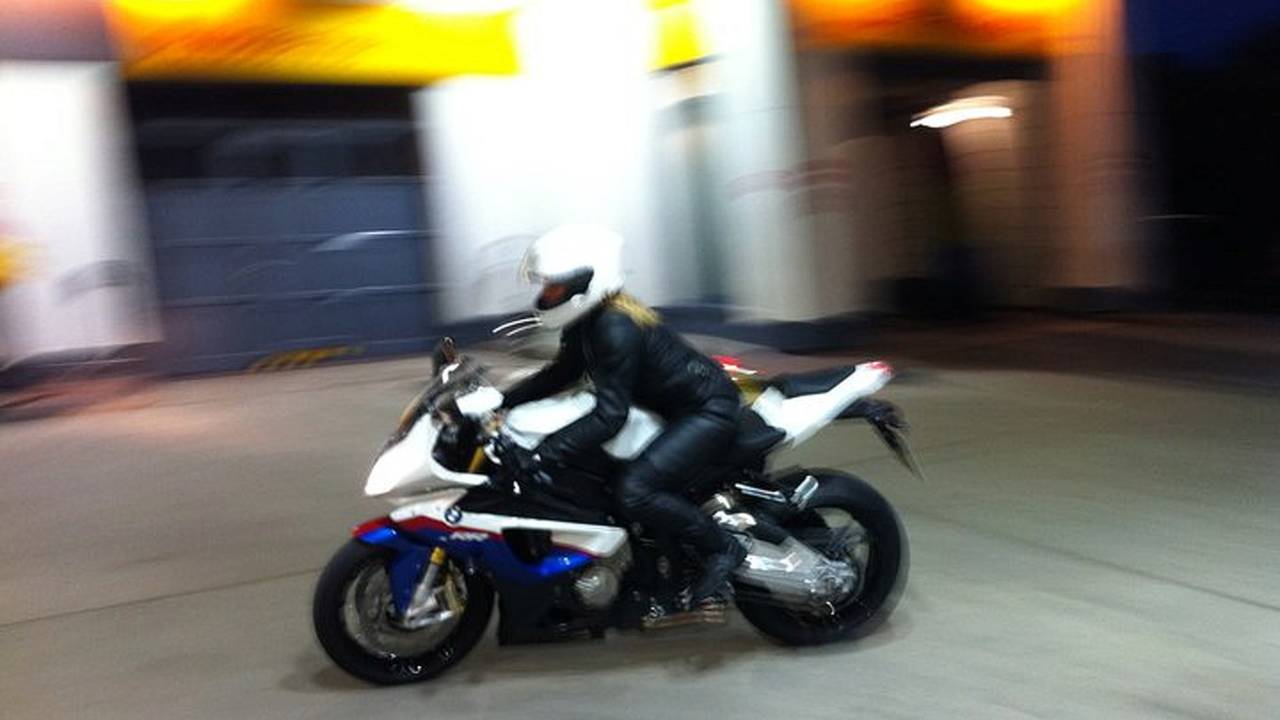 I came to my senses—I didn't speak the language and I didn't see the attackers clearly. As a crowd grew and a woman in hysterics wailed, I decided that I would rather not get involved. This violent act made me question how I would spend my next day. I checked my email and saw that the photographer for the next shoot (KTM), Jork Weisman, had just written me. He invited me to come to Vienna to ride some lovely roads. Vienna is only a two hour drive from Wels. Was it worth it to go the day before the shoot? Sure!

Lesson 11. Don't call it a joyride if it's raining.

Jork had a bad feeling too. He didn't like all the rain and lost his keys, which took us about an hour to find.

Lesson 12. If something is instinctually holding you back from riding, don't ride.

MUST READ:  Kickstand—Taking on Bonneville: What to Know Before You Go | RideApart

My crash on the Bonneville was rather boring: A low-side oil slick with the back end washing out. I had done one track day before I left the states, so sliding on my back had already been in my head. Time stood still in that moment on my back as I watched the Bonneville sliding away from me towards Jork. So anti-climatic and sad.

Triumph had required me to purchase a travel insurance called The AA. I strongly suggest getting this for any journey where it's available. They took care of both the bike's return as well as my own return to England. 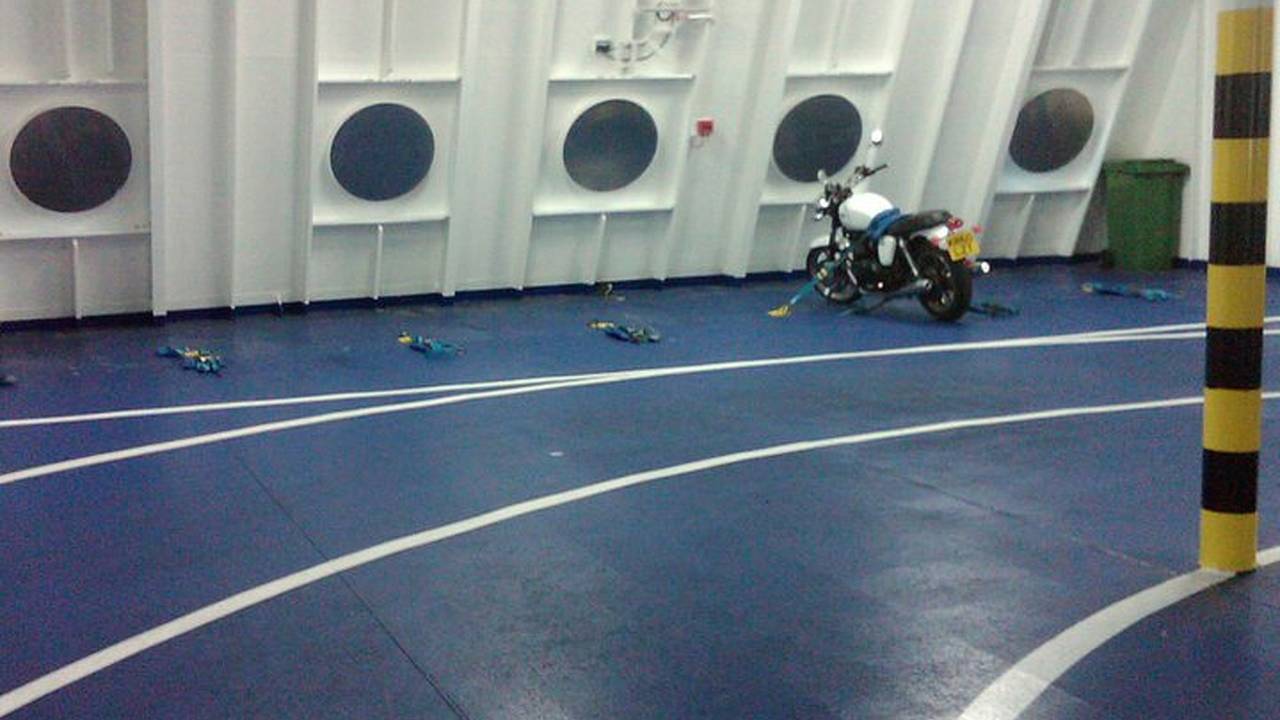 We managed to do the shoot in Austria without a hitch, but the rest of my journey did involve a hitch. Hitch-hking in the Alps, a police station in Switzerland, the Brembo factory in Milan, two MV Agustas, three KTMs and Italian twinkies. That story will have to be told another day. I hope that my journey will save readers from potential misadventures. Remember, it's always better to ride another day than to ride too hard one day.

By: Katharine Erwin
++
++
Got a tip for us? Email: tips@rideapart.com