Time To Get On Track - Kickstand 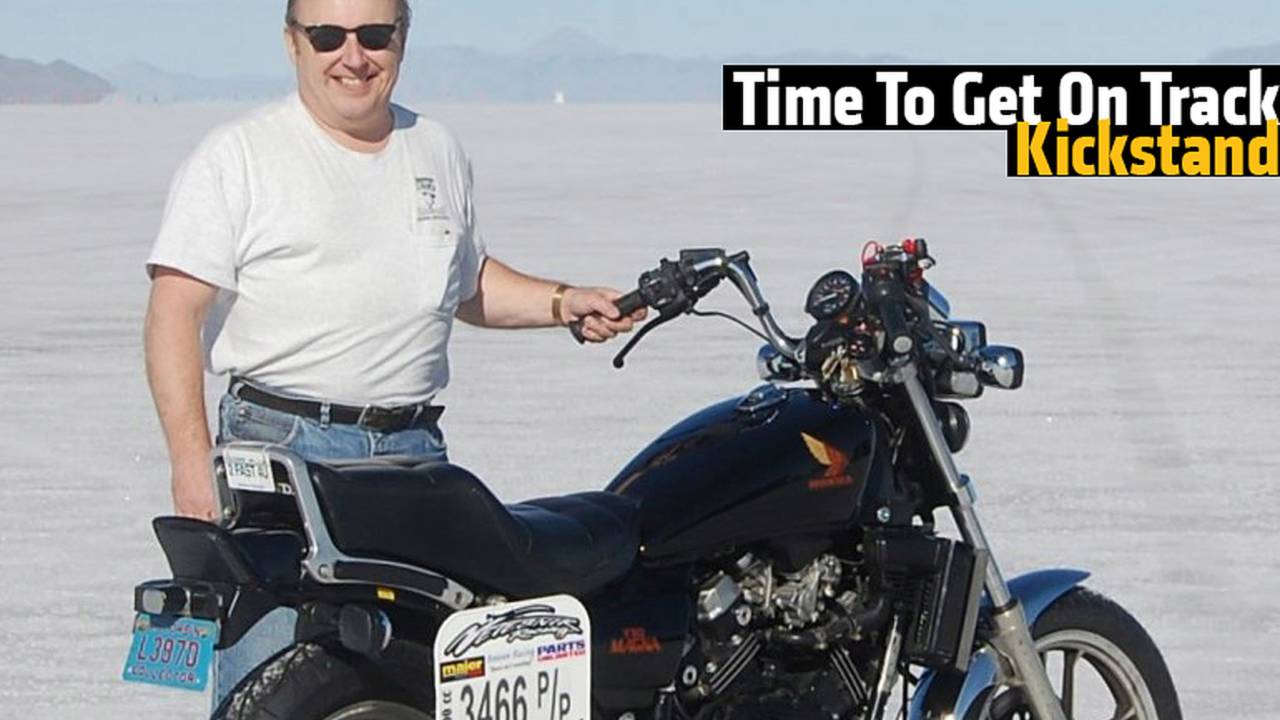 We anticipate offering bits and pieces of the motorcycle world that will range from hard fact to pure fiction, technical precision to loosely thought-out opinion.  This little corner of RideApart’s world will cover everything from hot topics in the motorcycle industry, to regulations (new and pending), organization items such as developments or initiatives in the AMA, MIC, MSF and so forth, to just essay-type material on the joys of certain rides, tours, events and classic/vintage bikes and maybe even a little nostalgia thrown in.

I can’t say I have any particularly great technical riding skill or mechanical ability; in fact, I am about average in most aspects of my motorcycling background. One exception to that might be in my abnormally high level of interest in the motorcycle as a machine in its myriad configurations and all things surrounding motorcycle sport.  You might say I’ve made a near life-long study of it.  Sick, eh?

Nonetheless, I think that may be a factor in why the great folks at RideApart offered me the chance to put a column together.

One other aspect of my background with bikes that might be a little unusual is my involvement in motorcycle land speed racing since 2009.  Back in 2007, I had the opportunity to meet and do an article about a couple of guys that compete in land speed racing on a very serious level: Bill Whisenant of Motorcycle Performance in Madison, WI, and Jim Haraughty of Team MS Racing.

With their help, I made my first trip to the Bonneville Salt Flats and took my $400 fixer-upper 1984 Honda V30 Magna to over 104 mph.  That taste of the salt hooked me.  Since then, I’ve been back to the Salt three more times and in 2014, took my 40 year old Honda CB350F to an AMA National Speed Record.   Getting an AMA National Number 1 Plate was a boyhood dream come true.

Which brings me to the real subject of this installment of Kickstand:  being able to realize those dreams through the American Motorcyclist Association’s amateur racing programs.

If you’re like me, you assume it is way too expensive and complicated to even think about without major corporate sponsors.  Believe it or not, thanks to organizations like the American Motorcyclist Association and its amateur racing programs, you may be a lot closer than you think to living that dream.

One of the first steps is to take a look at the AMA Rule Books for the kind of competition you may be interested in.  There are a total of nineteen Amateur class racing rule books including the 2015 Amateur Competition Handbook and 18 special supplements for each kind of competition.

MUST READ:  5 Reasons You Should Ride A Naked Bike | RideApart

Another step is getting an AMA membership—which is required to compete in AMA sanctioned events.  More information on how to do that is at: American Motorcyclist

The Amateur class rule books are available free online here. The link to the racing rule books for AMA Pro Racing is available on that site, as well.

The rule books lay out what things you will need to do to your bike to make it pass scrutineering, otherwise known as “tech inspection.”   This is where the AMA inspectors make sure you and your bike have the required safety gear and that will vary by the type of competition.

For land speed racing it includes things such as safety wired fasteners, metal tire valve stems and caps, steering damper, tether kill switch and things that can be or must be removed like passenger foot pegs, rear view mirrors (or taping them) and other details.  Riding gear is specified, as well, from helmet to boots.

The unique thing about some of the amateur racing classes is how many opportunities there are to run with a low budget.

A good example is in land speed racing sanctioned by the AMA in the Bonneville Motorcycle Speed Trials coming up August 29 through September 3, 2015 in Wendover, UT.  For more on that, see: Bonneville Speed Trials/

In that event in 2014, I ran a 40 year old Honda CB350F that I picked up at an estate auction in Wisconsin for $600 in the P/PC class and that old bike took me to an AMA Grand National Land Speed record.  The class it qualifies for requires that the bike be box-stock and no less than 35 years old.

This has two immediate effects on your dream of racing: it means the basic bike can be fairly cheap and simple and since rules prohibit exotic race-ready modifications, costs for preparing the bike are limited to getting it into its finest stock condition.

Oh—yes, you could still end up spending a bundle if you have a bike that is in bad shape and needs everything, or if you need to pay a shop mechanic to do everything that must be done, or if you decide to go all-out and have things like port polishing, dyno-tuning and such done.  But if you start with a reasonably functional old bike and can do much of the prep yourself, you can put a bike on the salt for less than $1,000 like I did.

There are other costs involved, as well, but if you can rustle up a few local sponsors to help out, that can move things along.  Your local motorcycle dealer or other local businesses may be able to help with part of the cost or with free or discounted parts, riding gear, technical advice and so on.  It may also be possible to get used gear for some of the more expensive things like leathers—I got my AGVSport fully armored one-piece leathers at a resale shop for $30 and a pair of Alpinestars racing boots for $45!  Sometimes it’s better to be lucky than good.

MUST READ:  10 Motorcycle Movies You Haven't Seen Yet | RideApart

It’s also important to account for the cost of the learning curve.  In any motorsport, there will be time taken to sort out the bike, the skills and so on.  My record didn’t happen the first time out—it was my fourth trip to Bonneville.  On the other hand, every trip out there was a blast, even the ones where the weather cut the fun short.  It’s about the journey, not the destination.

Summer’s coming and it’s time to get on track!