When You Fall Off the Horse, Get Back On: A Women Who Ride Profile

When You Fall Off the Horse, Get Back On: A Women Who Ride ProfileWhat makes road racing so great is that it’s one of the only sports that lets women...

What makes road racing so great is that it’s one of the only sports that lets women race with the men. Since it is a coed sport, it’s not always easy to pick out a female motorcycle racer in the slew of bikes.

If you’ve read my previous story on Joy Higa, I mentioned my background of being a turn worker for the American Federation of Motorcyclists (AFM). I also described how she was easy to spot in a sea of similar-colored bikes—the main indicator being her braided ponytail.

At first, Jennifer Lauritzen was not easy to pick out from the crowd—there was nothing for me to tell that she was a woman racing a motorcycle. There was one moto, however, that kept Joy on her toes and giving her a run for her money in Afemme, the all-women’s racing class, this bike was always there with Joy and even able to win a few of those races. I then realized, holy cow! This is a woman on a 600cc bike and she’s freaking fast! I was eventually able to pick Jenn out in her other races (where men were the majority) from the crowd by the way she rode her race motorcycle.

"My Messed Up Logic"

Back in 1998, Jenn’s husband Jason, who grew up riding motorcycles, bought her a quad bike so he could teach her how to ride. He couldn’t "find one" for himself, so he opted to purchase a dirt bike. After learning the basics, they decided to go to Carnegie, a great area to go off-roading. 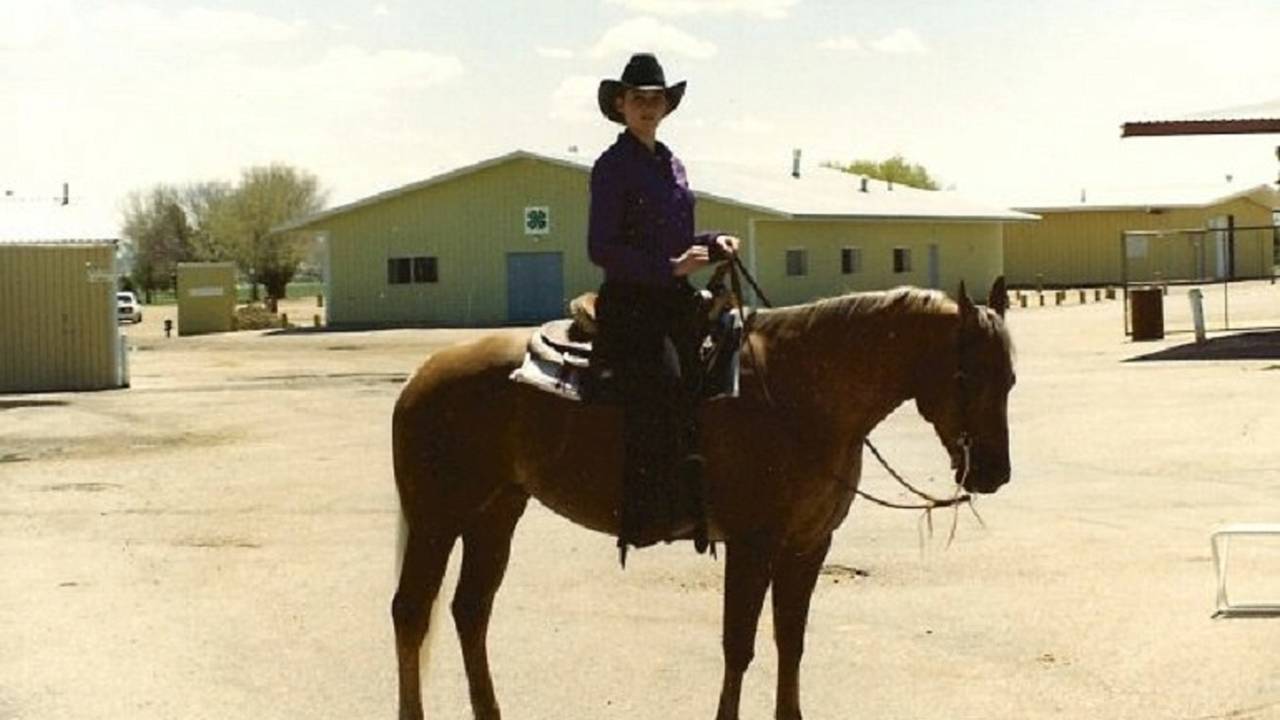 Before learning how to ride two-wheels, Jenn rode horses growing up.

“We went trail riding for the first time and we were going up this hill that’s pretty steep, and quads have a pretty short wheel base. He told me to stand up and lean over in front of the quad and to stay on the gas so I could get up the hill. Well, I got three quarters of the way up before I looped it and the quad landed on me. So I, with the quad on top of me, slid all the way to the bottom of the hill and I was stuck,” she said.

Jason made it to the top, but unfortunately, since Carnegie has only one-way trails, it took him 20 minutes to get to his wife. By the time he got there, he could see she wasn’t very happy.

“I’m like, ‘I freaking hate this thing.’ And he’s thinking ‘oh she’s done with all of this.’ I then tell him ‘I need a dirt bike.’ He was taken aback and was like ‘what?’ I then told him that if I crashed, at least I can get the thing off of me. So my logic was I needed a dirt bike so I don’t get pinned under it. So we sold my quad and I got a dirt bike,” she explained.

In 2003, Jason decided he wanted to race motocross. Since they were always at the track, Jenn’s logic was if she wanted to ride her dirt bike more often, she might as well race motocross. What also persuaded her decision was the only female racer out there, who got an all-women’s motocross class together to help motivate women to race since there weren’t many girls doing so at the time. 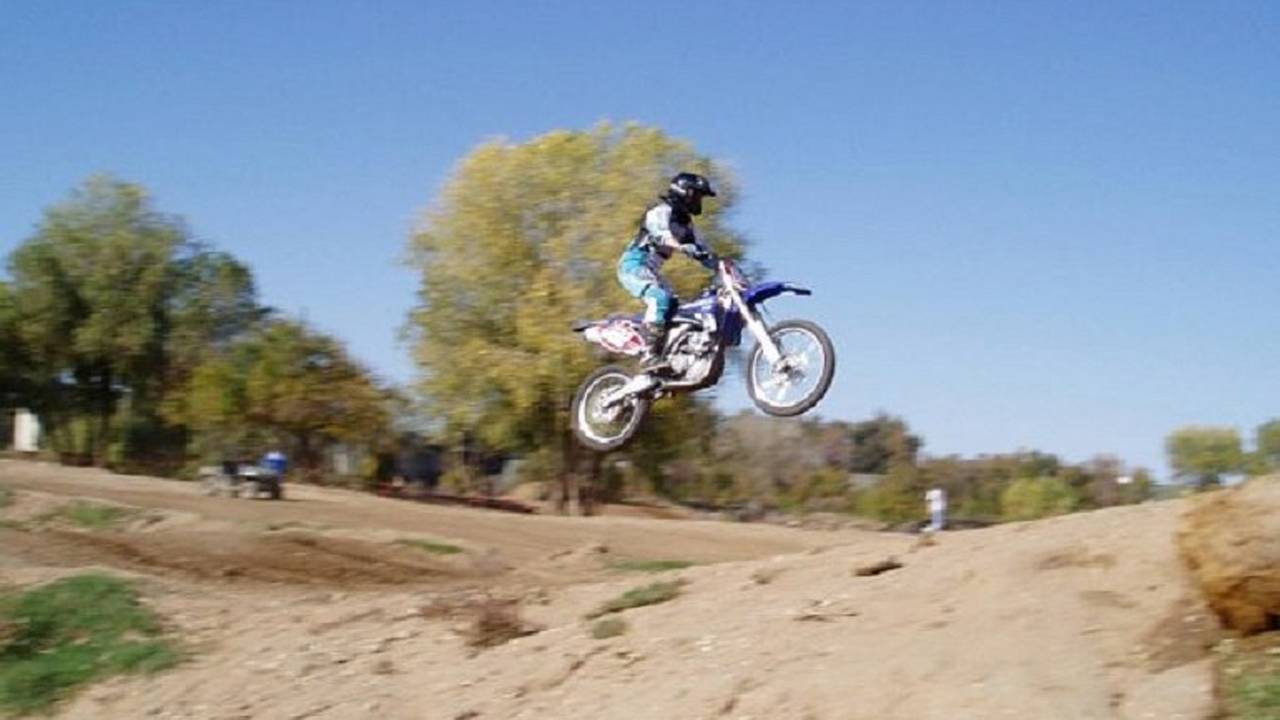 Jenn ultimately bought a street bike— a Ninja Ex500. When she first started riding, she only had a learner’s permit so she had to take the service roads. One day after her commute to and from work, she told Jason that she was trying to pass this semi on a windy River Road.

“I couldn’t get the bike above 80mph. The draft from the semi was pulling me in. That’s when I thought ‘I need a bigger bike’ according to my messed up logic.”

Jason conceded and she bought an R6, but he was adamant that if she was going to ride a bigger bike, she needed to do a novice school track day to improve her riding confidence. As an anniversary present in August of 2006, he enrolled her in a two-day class. She was hooked, and two weeks later she and Jason went to another track day together where one of the instructors told Jenn that she should think about racing.

“I was like oh! Racing would be fun. When we got home I looked at Jason and was like, ‘should we race? I want to race. Let’s race!’ And he’s like ‘You’re insane you’ve done two track weekends and you wanna race?’ And I said yea!” 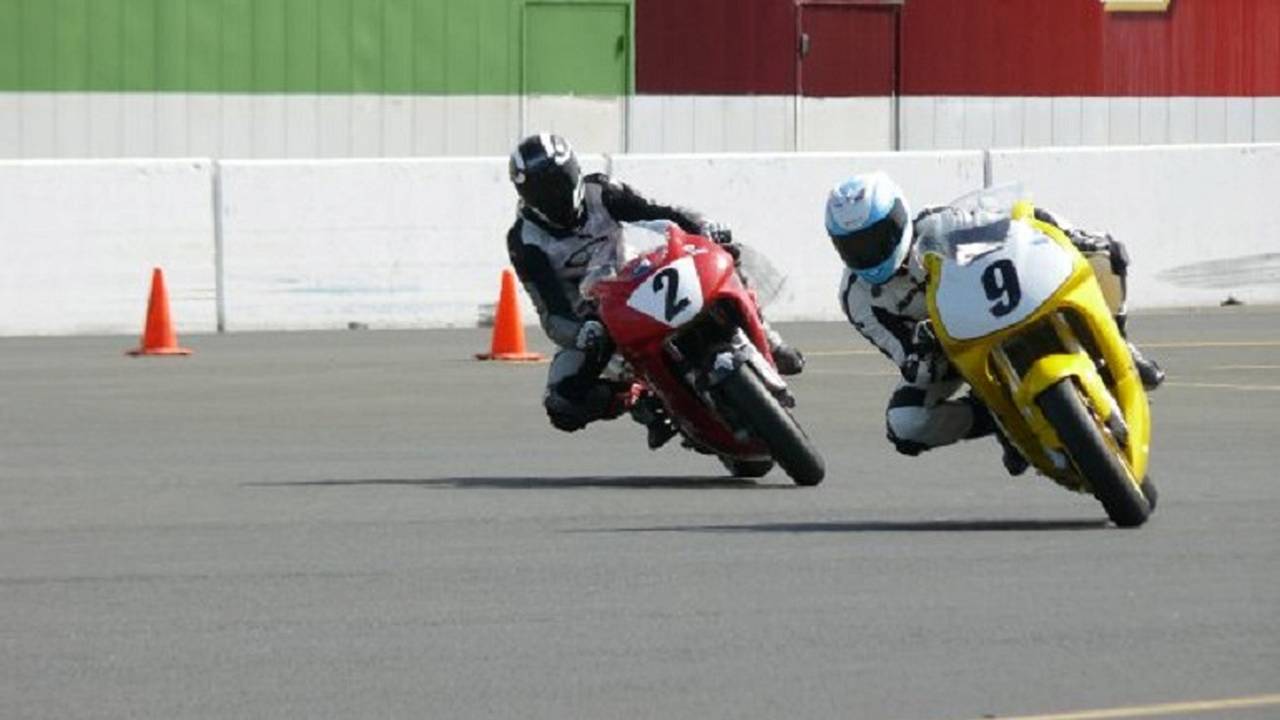 Jason and Jenn and their recently acquired race bikes.

So they found some race-ready SV650s and began racing in the spring of 2007.

“I was super slow since I had only done a handful of days on the track, so I was still learning. I was racing with 72 bikes, and at the time there were waitlists for some races—I was learning by fire,” she said.

Jenn started to get faster though, and when most of her fellow-female racers jumped from their small bikes to 600cc motorcycles, she held out. She explained, “I wanted to be the best I could be on a 650 and I wasn’t at the top of the pack in the 650 classes, so I knew there was still room for improvement, I knew I could still go faster on this bike.”

When she felt she was ready, she moved to an R6, and the first weekend she raced on that bike, she was on the podium, taking 3rd in Afemme in a field of 10 female racers. 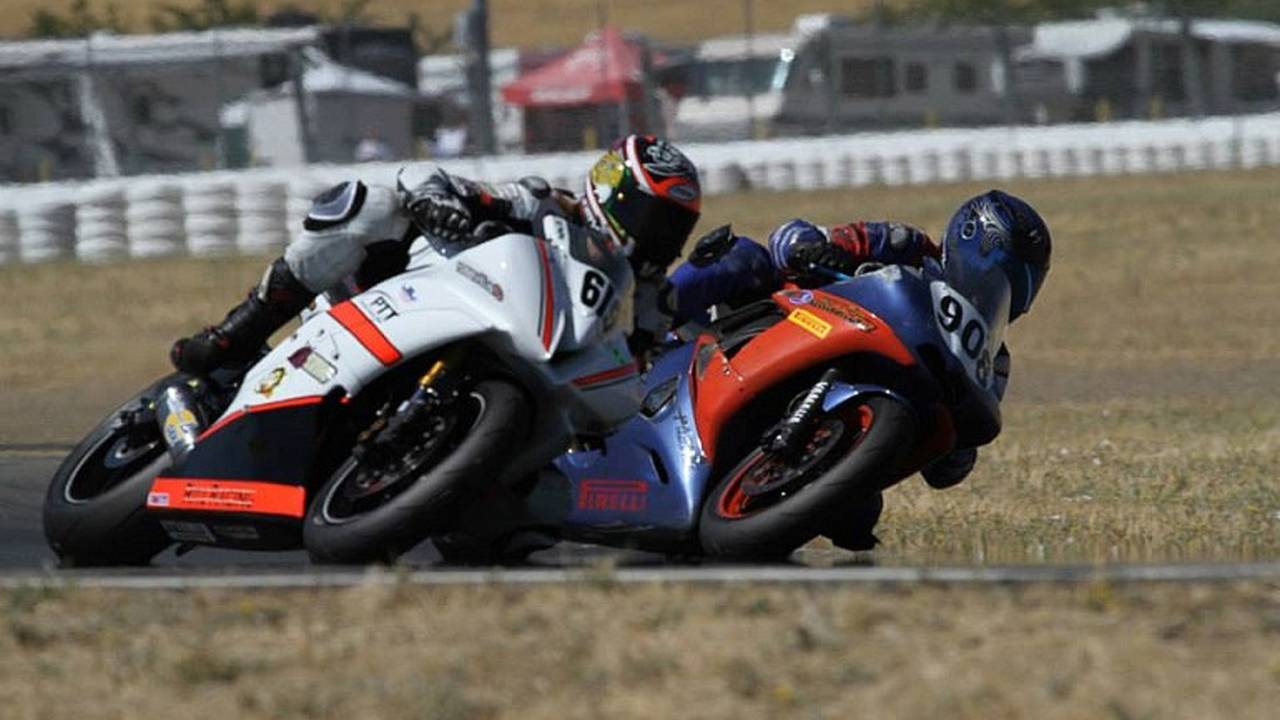 However, when Afemme was first being pitched to the AFM, Jenn was initially against it. 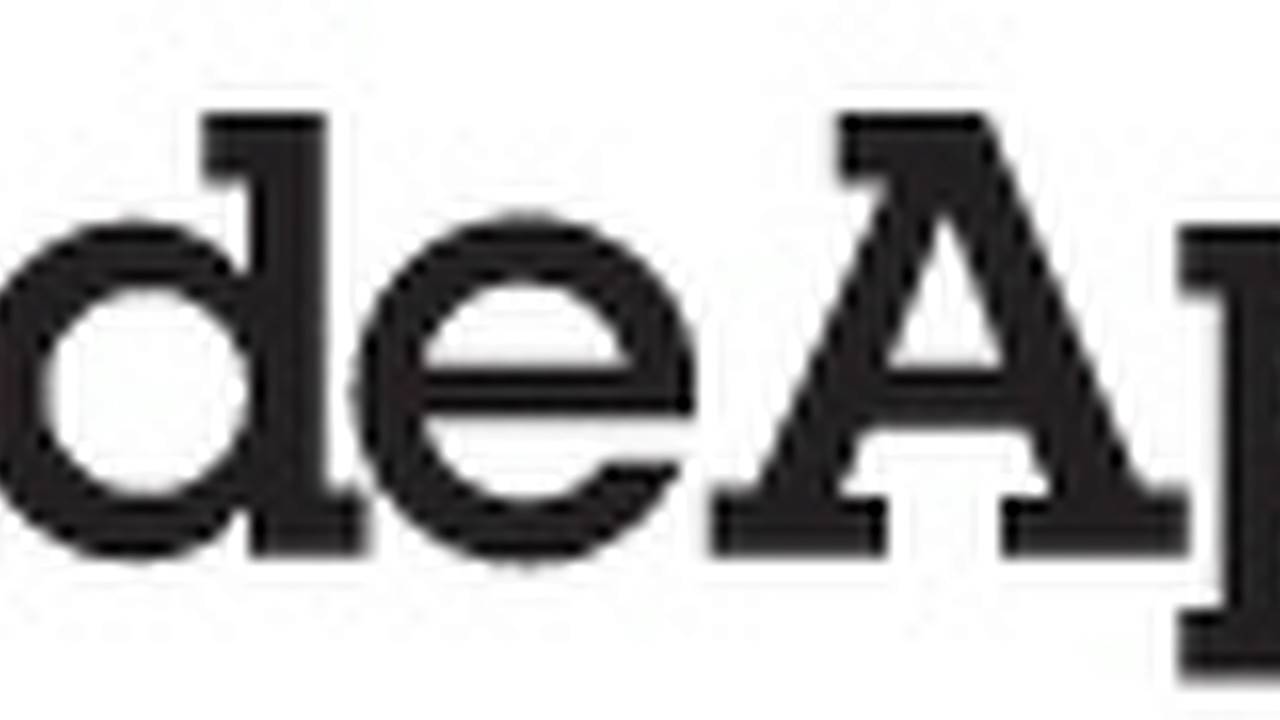 “I want there to be a women’s class because I see it as a way for young girls to find idols, it would help motivate younger girls to see this sport as something they can do, which will in turn get girls to start at a younger age. The talent would get better, more competitive, and they can go out and beat and be competitive with men,” she explained, “and it’s funny because when the class first started, it made me more competitive because, of you know, bragging rights. I mean, who doesn’t want to be the fastest girl? It’s really not that different in regards to wanting to be the fastest racer in any other class.” 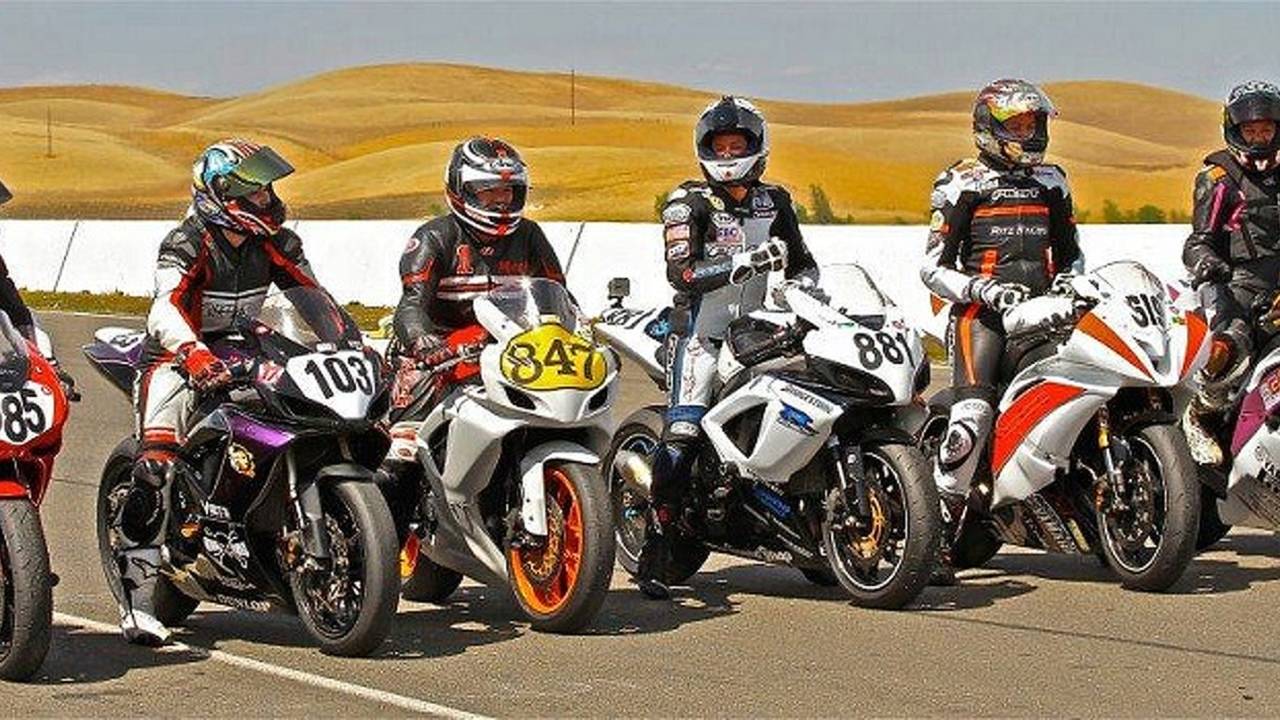 Jenn also received premium coaching from Ken Hill, who is one of the chief YCRS instructors, and did a one-on-one instruction day with Scott Russell. This helped her immensely when it came to being competitive on her Yamaha. She put all of her attention on doing well in the 600 class races (note: any 600 class in the AFM is pretty damn competitive), and set a goal for being top 10 in those classes.

“I got 6th a couple of times, which is kind of impressive…I feel like it’s pretty impressive. Looking back at it, I’m like wow I can’t believe I did that,” she said.

And even though her husband Jason and her friend/competitor Joy are on 1000cc bikes, she’s holding out…again.

“The fact that I can still hang with Joy and beat her on occasion with her on a liter bike, it pushes me to go faster and since I am not at the front yet in the 600 classes there is still room to improve,” she explained. 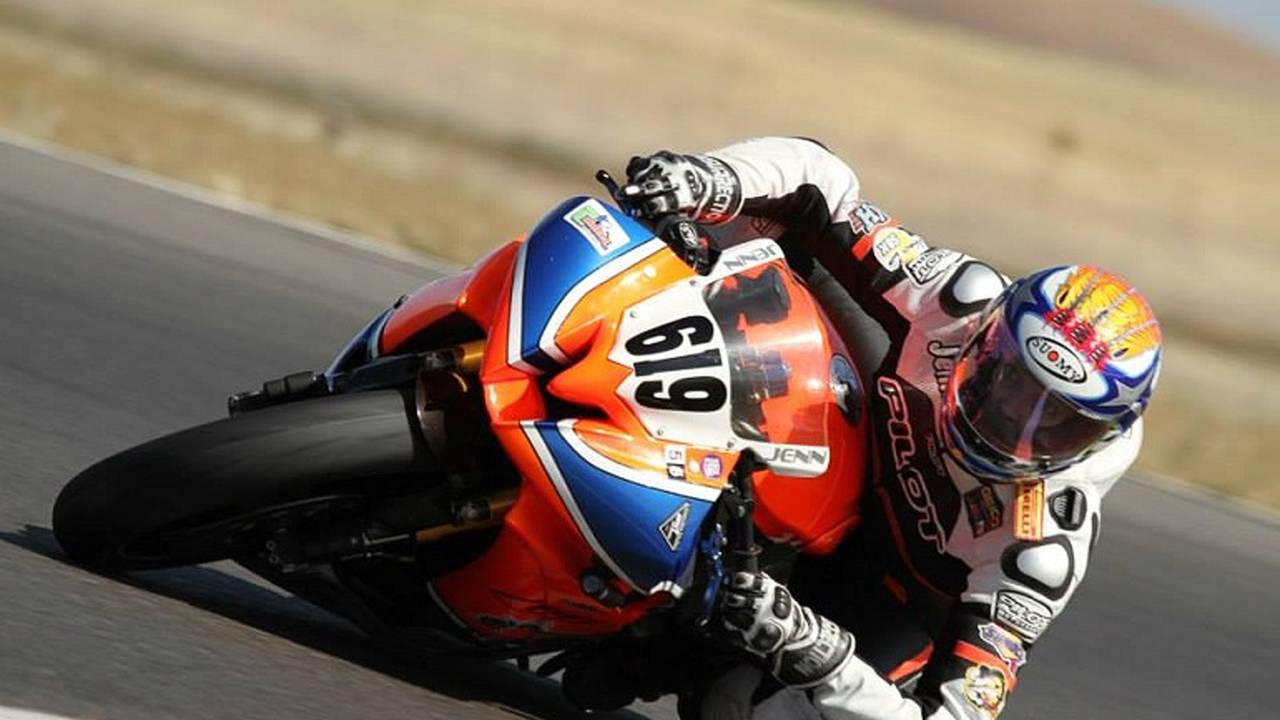 Jenn went almost three years without crashing, but unfortunately, her luck ran out due to unfortunate circumstances. Her first wreck after her long stint was at Sonoma Raceway in 2013. This was caused by someone (literally by a rider sliding on the ground) running into her into turn 1. She suffered a collapsed lung and was out for the rest of the season.

In 2014 while dialing in her suspension settings that suited her riding, she low-sided and hit a cone while sliding. She ended up fracturing her pelvis which ended her season.

“I joke that I break easy, but heal fast for the most part. I’m generally not afraid of getting hurt, which is why I keep coming back to racing.”

“I was raised was on a ranch and my family was always very active. When I was a kid, and whenever I got hurt it was like okay you got hurt, but I’m not going to cry about it. Brush it off, you’ll get fixed and then you gotta get back out there. You gotta get back to work.’ I grew up riding horses, so when you get bucked off you get back on. It’s the golden rule of the cowboy right?”

At first, I was under the impression she was going to take the 2015 season off, but to my pleasant surprise, Jenn hopes to race a few AFM rounds this year. She is also looking to do more supermoto and flat tracking in order to keep improving her riding.

“For me each, each time I’ve gotten hurt, I’ve come back stronger and faster. And I just think it’s resolute to work harder because I’m down, I’m missing time on the bike and everyone is still out riding and I’m trying to recover. So I have to work harder so I don’t have to come back slower, which is where I’m at right now.”

A lot of women racers know Jenn through a secret “Women Road Racers” group she created on Facebook. The group currently has 202 members and she created it in order compile a database of all the women racers (past and present) in the sport. It was also created for female racers to meet each other, support one another, and see who else is out there racing.

“This group helps us promote one another. I want more moms, dads and little girls to see that road racing is an option for girls. The only way for them to see that is to show how many girls are doing it,” she said.

Even though Jenn is passionate about road racing and is an inspiration to fellow female racers (me included), there’s been a particular man who’s been with her through thick and thin. After all, beside every great woman, there’s a great man who is willing and ready to conquer the world as a team. I asked Jenn what kind of coach and motivator Jason is for her.

“He’s really supportive. As I’m getting faster and faster, he takes time to always help me with my bike. He gets frustrated with me at times, no doubt, when I’m being ‘I want to try this, I want to try that.’” She got a little teary eyed and laughed about it and added, “Jason is my number one fan—he’s very positive and reassuring.” 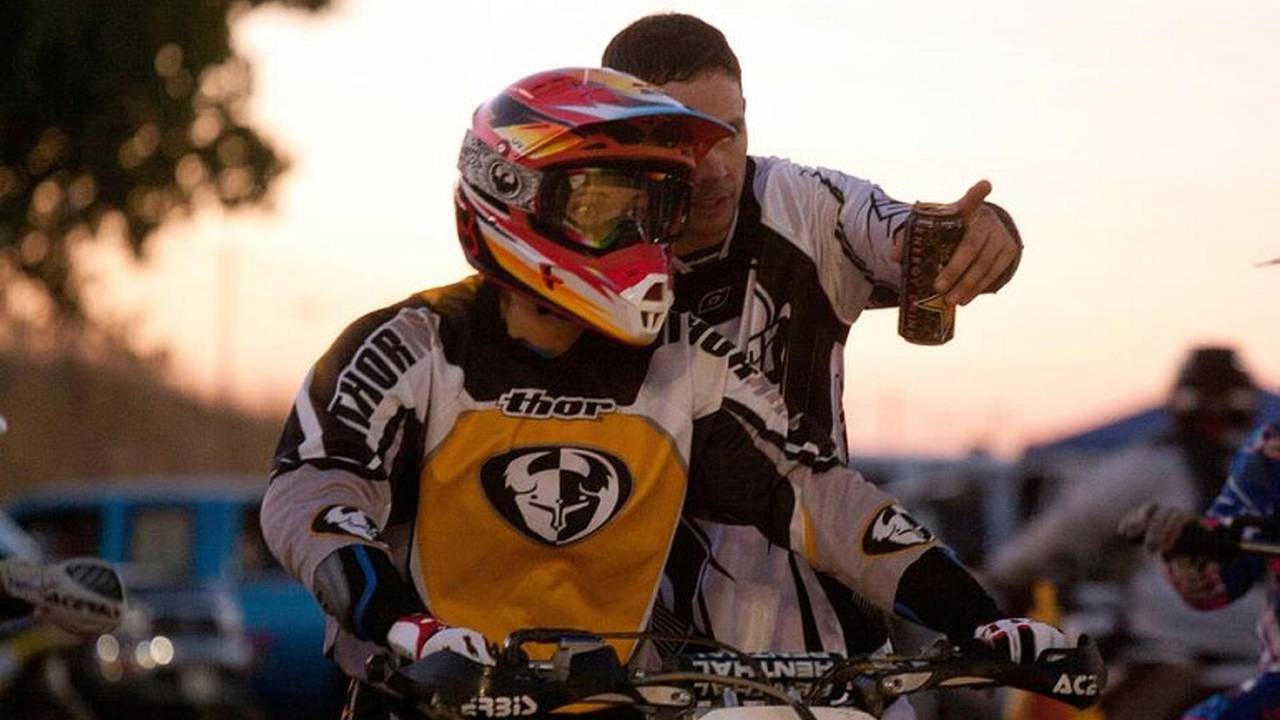 To keep up with the Lauritzen's racing, check out their website here.