The Racer on the Grammy Gold Bike: A Women Who Ride Profile 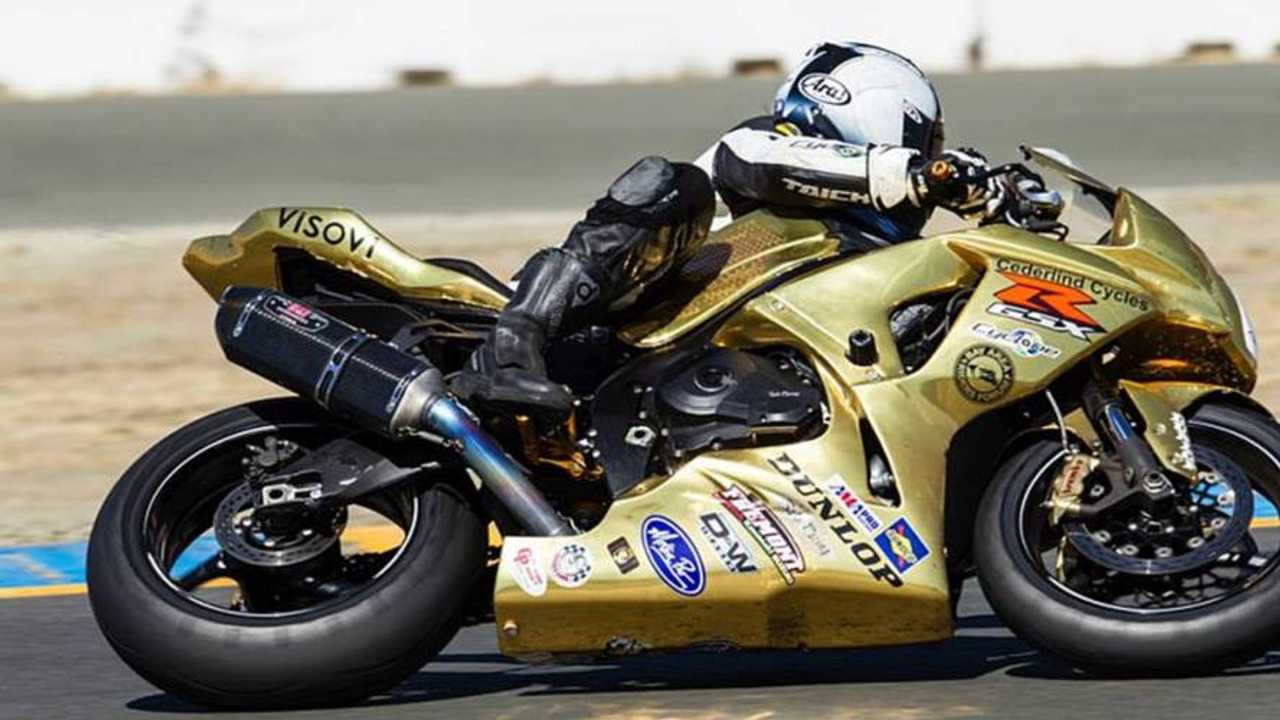 Meet Joy Higa, the Grammy Gold bke racer, in our next installment of our RideApart's Women Who Ride profile.

“What a rad looking bike!” I know this was the first thought that went through your mind when you saw this story’s feature image. Don’t worry, I’ll get to that in just a bit—what’s more important is the rider who tames this majestic gold beast. I want to first tell you about one fast woman motorcycle racer in NorCal...

I initially saw Joy Higa when I was turn worker for the AFM (NorCal Amateur road racing club) in 2012. At the time she was black on black: black helmet, leathers, gloves, boots, and bike. There was a splash of orange on her GSX-R 1000 (the “R” was orange); however, she was actually easy to spot in the sea of moto racers who sported similar colors. What made her distinguishable on the track was her long, thick braided ponytail blowing around in the wind. Joy is such a fitting name for her too. She has a smile that brightens up the room, is SUPER nice, and always gives such an animated wave to the corner workers on the cool down lap.

It’s amazing what you can do when you set your sights on something, and that’s how it all started for Joy, who currently holds the number one spot for Afemme—the all women's class in the AFM—and is also an AMA Superstock contender (last year was her first run on a liter bike). What made her start riding was something as simple as seeing motorcyclists trekking along on the streets. This influenced her to take the MSF course at local community college back in 2002, and purchase her first street bike: a 1998 Kawasaki EX500.

“I had that Ninja for about a year and every three months that thing would spring a leak someplace, and I just got sick of it so I went to the dealer and bought a brand new 2003 R6,” Joy said.

From that point on, that’s when things started to get fun as hell.

She began racing at a time where the field for female road racers was very slim (I guess you can argue it still is). What got her to the track was a guy names Bob Marshall, former co-owner of Pacific Track Time—a local track day provider.

“He one day told me, “Come to the track! It’s a lot of fun.” And I did! A little after that I got a season pass in 2004 and part of the season pass included getting your racing license. So that’s what I did,” she said matter-of-factly.

She began racing her ’03 R6 towards the end of that race season. I then asked her what classes she raced when she first started. Back in 2004, she said there wasn't an all-women's race class so she started in the 600 production class and superbike class. Afemme didn’t manifest until 2007, and she took first place in the class that year (this was also her first championship). At the same time, this was the year she got a feel for a bigger bike thanks to fellow motorcycle racer, Pat Blackburn, who handed her his liter bike to take out for a few races.

“It kinda got me hooked on a bigger bike, but at the time, I wanted to do AMA and all I had was the 600. At the time I told myself I’m going to go back to my 600 and race AMA,” she said. So, again, she set her sights on something—the AMA—and in 2010 went on to race in 600 class. She didn’t do as well as she hoped stating, “I did Infineon (now known as Sonoma Raceway) and Laguna Seca, but crashed out at Laguna and that kind of sucked.”

But that didn’t deter her from wanting to return to race in AMA again. In 2012, Joy began to racing a Suzuki GSX-R 1000 full time for the AFM and put in a lot of time on the bike before she decided to go toe-to-toe with the pros again in 2014.

“I’ve wanted to do it for forever and I felt that I wasn’t fast enough. And finally after racing my liter bike for three years I thought ‘Okay, I think I’m fast enough and I’m pretty sure I can qualify,’ and then... I didn’t qualify. So that was really disappointing. But then, Dave Stanton started helping me out and we found huge gaps in my program, so I’m really looking forward to this year. It’s going to be awesome,” she said.  It's great to hear Joy will be heading back to the AMA riding her gold shrine this year.

Okay, as I promised earlier, we can now talk about the gold Gixxer.

I asked Joy where did the idea for that gold come from? (As I previously mentioned she was at one point black on black, so the gold was a nice change; it definitely made her easy to point out from the sea of motos zooming on by.) When you first you look at it, you probably think, "okay this thing definitely has to be some vinyl wrap"—and it initially was.

“The gold started back in 2009 on the R6. Back then, there wasn’t any stretchy gold material, so I had to put a thousand strips all over my bike, and it looked okay from far away, but once you got up close it looked pretty terrible,” she said.

She had a friend and racer, Matt Buck from Visovi wrap her bike with the stretchy vinyl, and it made the bike look a lot better. But soon after, she was introduced to Chrome Factory, who specializes in spray chrome plating. You also know the Grammy awards you see music artists carrying around? Chrome Factory are the folks who painted those ( I know! I thought those were real gold this whole time too...I'm joking by the way.) They were able to get her bike to the rad gold color you see in the picture below, so I guess you can call the color “Grammy gold!” (Note: This isn't the official color, I just made it up.) The Gixxer, however, is technically not painted gold—it's silver plated (using real silver) with a gold color tint. Chrome Factory is also sponsoring her for 2015, which is pretty awesome.

As for the bike getting a lot of the lime light, Joy said she doesn’t mind.

I asked Joy if she had any other hobbies outside of moto racing. It just so happens she does and it's a pretty cool one: “Believe it or not, right now my newest hobby is MMA. I go to this gym that sponsors me called Cyclone. And I’m totally getting into Brazilian jiu jitsu, muay thai, and boxing,” she said while giggling. After her response, I felt compelled to ask if she was looking to compete at literally kicking some ass?

“Oh no! It’s just for fun, but I love it. I go there for a conditioning class every day just for conditioning, but for fun I do MMA,” she said. It sure beats hitting a treadmill in order to get some moto fitness in.

READ MORE: This Old Bike, Part 1: How We Upgraded the Suspension on Our R6 Project Bike| RideApart

As for Joy’s goals for the 2015 race season, she said she wants to finish an AMA Superstock race, obtain first place again in Afemme, finish in the top three in Open GP and Open Production, and finish top five in Open Superbike and Formula Pacific.  Most of these are pretty fast classes, and her goals are ambitious; however, they’re definitely attainable at her skill level.

I have a feeling she’s going to figuratively kick some ass this year.

Check out Joy's YouTube channel to see footage of her on the gold Gixxer and her Facebook page for updates. (Cover photo by Mike Doran Photography)