Vintage Motorcycle Racing: The Next Adventure in AHRMA 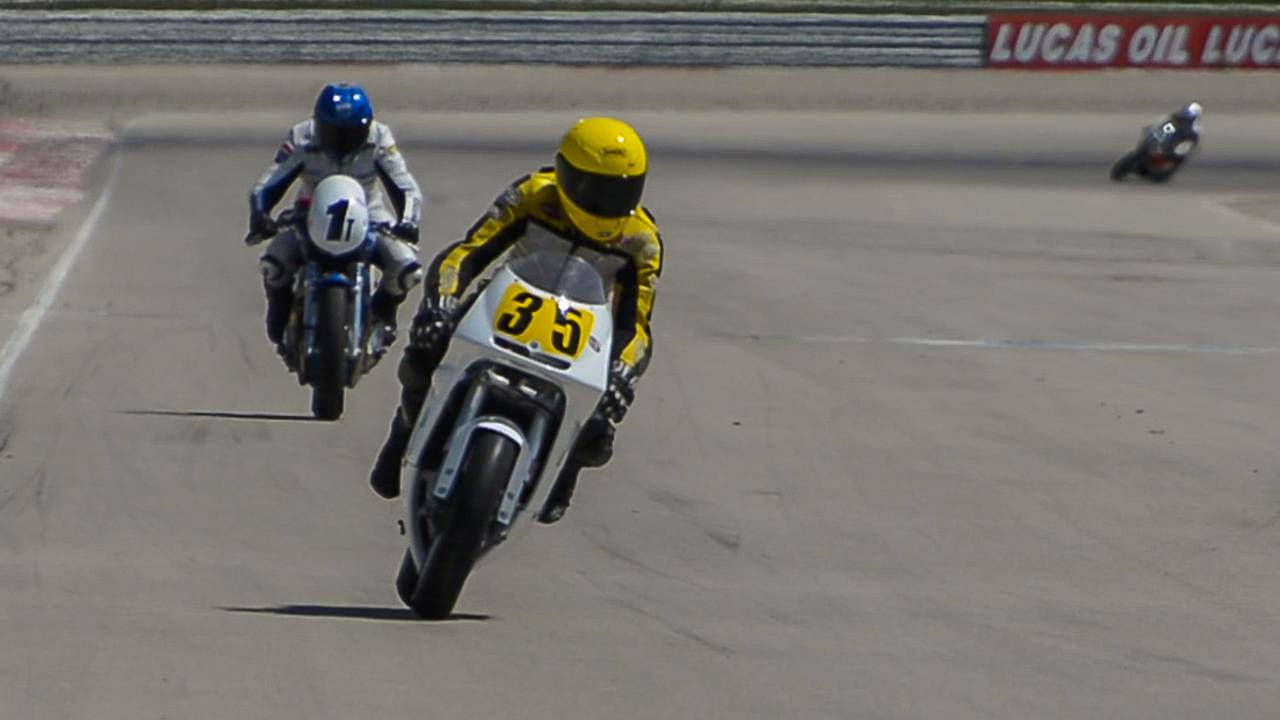 Vintage Motorcycle Racing: The Next Adventure in AHRMAI shuddered with anticipation and excitement as Ralph Husdon pulled the forklift into place and...

I shuddered with anticipation and excitement as Ralph Husdon pulled the forklift into place and lowered my dusty, red 1980 Yamaha SR 500 race bike from its storage loft to the shop floor. For more than half-a-decade, its single cylinder motor sat motionless amid Ralph's dozen other vintage racing motorcycles. If everything went right, the red racing thumper and I would be lining up on the starting grid at Willow Springs International Raceway for the American Historic Motorcycle Racing Association's (AHRMA)  "Corsa Motoclassica," Historic Cup Road Race series in just two months time.

As I pushed the bike in to the corner of the shop that would be mine for the coming season, I started a mental list of things that would need to be done if we were going to be ready: Get the bike running, which was vague since I'm not very good at wrenching on motorcycles. Who knew what gremlins lie hidden under the fairing of the compact track-machine? Get proper racing gear, I already had a set of Rev'it Hunter leathers, but still needed race boots, gloves and a helmet. I needed to register for races, join AHRMA and plan a season, all on a practically non existent budget, and...why was the bike so hard to push? The tires were nearly completely flat after sitting for so long. Okay, number one task: put air in tires. I would need a new set of those as well. While they had never been ridden on—still sprouting with the little rubber nipples—they were ten years old. No sense in learning the hard way if they were any good. I would need tire warmers too. Race bikes don't have kickstands it turns out so Ralph loaned me a lift to use in the shop, I would need one of those as well. I lost track of my list and I hadn't even started.

No starter on the SR500 Race Bike. I'll have to learn to use the starter rollers

Alone with the bike, I thought back to the first racing motorcycle I had ever seen in the garage of a friend's house. Even as a high-school kid, who knew nothing about anything, I could tell that the machine wasn't meant for the street. Where the handle bars should have been were dangerous-looking, down-sloped clip-on grips. Where the torpedo-shaped headlight once lived was a metal mesh wind screen with a number plate fastened to it. The saddle was little more than a metal pan with a hump in the back, set low and far back on the frame. The top of the engine appeared as if it had been cut away, leaving no trace of the air box or alternator. The foot-pegs were set high and far to the rear of their stock position. But the parts of that race bike that made the biggest impression on me were the yellow tennis balls stuffed into the open ends of trumpet-like air intakes at the back of the carburetors attached to the two bulbous pistons sticking out horizontally from the sides of the motorcycle. Even more mind blowing was that the valve covers on both sides of the engine had been scraped flat from dragging on pavement through turns. Seeing that bike started a love affair with BMW motorcycles that has lasted 25 years, but I couldn't have imagined that it would one day lead me to racing.

More lost than ever, I asked Ralph where he thought I should start. He suggested that I pull off the carburetor, take it apart and clean it. Even though I'd never done any of those things, Ralph's understated confidence rubbed off on me. I'd spent hours in his shop watching him work with the speed and precision of an open heart surgeon on his land speed racing motorcycle, not with wrench in my hand but a camera. My girlfriend, Stacie B. London, introduced me to Ralph as her racing mentor a couple of years before and invited me to come watch him set land speed records on the dry lake bed at El Mirage, California for the 2013 and 2014 racing seasons—both of which Ralph won the Southern California Timing Association's (SCTA)  Motorcycle points championship.

Working on the SR500. What I cant fix, I'll use the rubber mallet on.

I brought my camera along and started shooting photographs and creating videos of his record breaking runs. When he began preparations to go to the "Speed Week" at Bonneville salt-flats speed trials for a run at the 263 mph record, I completely immersed myself in documenting his efforts. Sadly, "Speed Week" was ultimately cancelled in 2014 because of water on the salt flats. While all of us were disappointed, it gave Ralph more time to focus on his road racing efforts with Stacie.

Ironwood Racing at El Mirage from MOTO STELLA on Vimeo.

Shifting gears so to speak, I began shooting video of both Ralph and Stacie's racing on the AHRMA circuit. I also had the great opportunity to attend the events at the Miller Motorsports Park in Utah and the Holy Grail of vintage motorcycle races, the "Vintage Motorcycle Festival," at the Barber Raceway in Leeds, Alabama, which also hosts perhaps the most amazing motorcycle swap meet in America.

Over the course of all the shooting and posting of videos, Ralph had mentioned that he wanted to compensate me for all the work that I was doing for him and each time he brought it up, I refused the offer. Getting a front row seat to his and Stacie's racing had become a labor of love for me. I felt like I was the one getting the benefit by simply getting to be there until one day, Ralph made me an offer I couldn't refuse. He asked how I'd feel about taking one of his race bikes as trade for the work I was doing—a red 1980 Yamaha SR500.

Stacie B. London racing at the Barber Vintage Festival.

By the end of that first evening of working on my newly acquired race bike, I had already broken down, cleaned and reassembled the SR500's, Mikuni carburetor. Along the way I discovered what amazing shape the bike was really in under the years of dust that had accumulated on it. Turns out that the fuel tank had been drained prior to storage and even the engine oil looked like it had just been poured from a new quart. While there was still much to accomplish to get both the machine and rider ready for the First AHRMA Race at the end of April 2015, we are well on the way.

Over the coming race season I'll be making updates and writing articles about my progress with the bike and on the track. In all this, I hope to share the experience of being a rookie racer as well as the incredible atmosphere and racing that happens at the American Historic Racing Motorcycle Association's (AHRMA) events.

Many cool racing modifications on The SR500