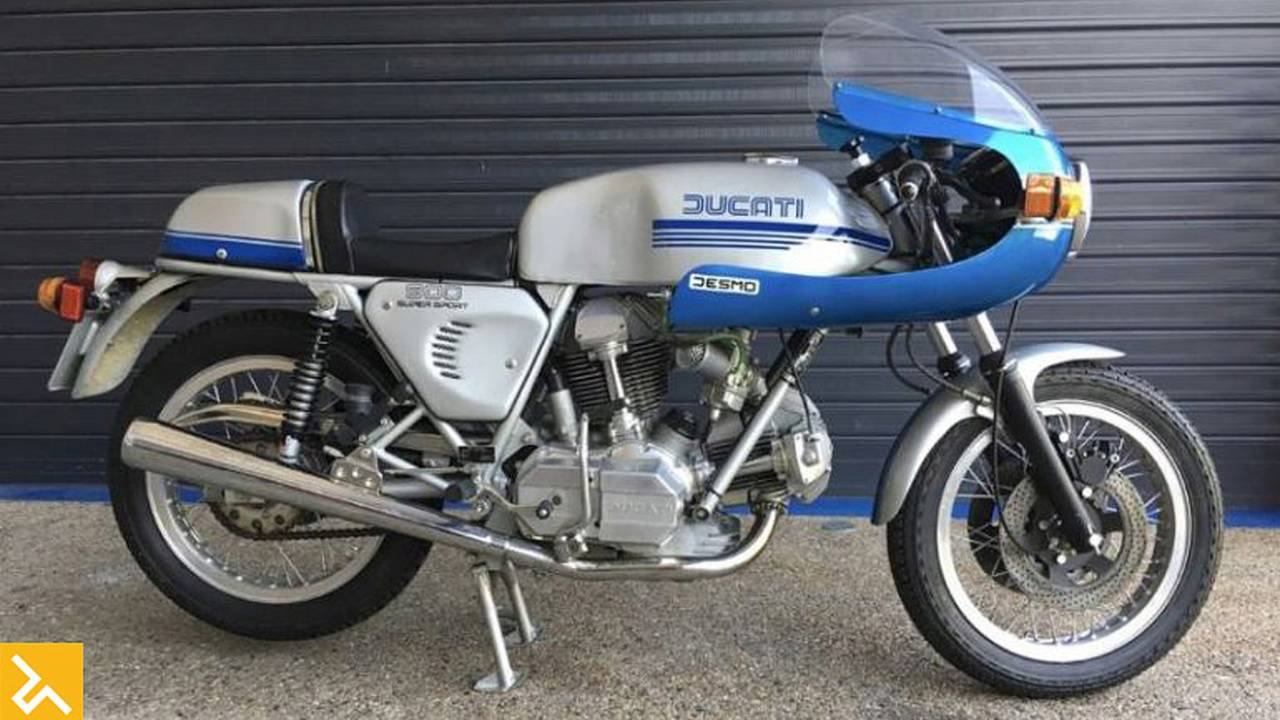 Top 5 Bike-uriosities - Week of December 12 2016At Bike-urious, we’re spending all of our time finding the most interesting motorcycles that are...

This bike is about to have as many owners as it does kilometers on the odometer...Four. The first owner bought FIVE bikes and then proceeded to keep them in excellent condition in climate controlled storage. It's never been started since the factory put on test mileage.

The engine is full of oil and doesn't leak, and the seller says it kicks over "perfectly." It's claimed to be in almost perfect condition - the only thing that shows the symptoms of age are the grips, which have seriously deteriorated. The tires are also original and somehow said to still be perfect. I'd be stunned if they haven't flat spotted. The bike found a second owner in 2013, and it comes with the original hand-written invoice.

So, what's such a low mileage example worth? If you said $71,000, the congrats! You and the seller are on the same page - and you can find this impressively-original 900SS for sale in Australia for $71,000 here on Bevel Heaven.

"Whopper of a chopper." That what Suzuki's tongue-in-cheek branding for the OR50 (called the Mame-Tan in Japan). It's a rare mini chopper with a two-stroke, 49cc engine that put down 5.5 horsepower.

For more information, check out Suzuki Cycles.org - my main takeaway is that the bike weighs just 148 pounds. Suzuki said this "mini-chopper is maximum roadster" with the back rest, high-rise handlebars, and even optional flame decals.

This example is said to be in excellent condition despite a dent in the top of the gas tank, a small separation of the stitching of the seat, pitting on the chrome, and some issues with the headlight and turn signals. So maybe the seller and I have different definitions of "excellent", but most of those are easy fixes and this is a cute rare find. Plus it comes with some extras - owner's manual, shop manual, warranty paperwork, Assembly/Pre-Delivery Service Guide, tool kit, and an advertisement from 1979. Find this little Zook for sale in Inverness, Florida with bidding up to $395 and the reserve not yet met here on eBay.

Starting with a R1150GS, the seller of this bike has turned it into a scrambler that can actually tackle some trails. He calls it a proven performer that has completed several Iron Butt rides and big bike Woods Trials. You may not like the way it looks but it's definitely a different take on the popular big enduro.

The bike has 50,000 miles though it's unclear how many miles have passed since the bike was customized. It features the tank from a BMW /7 and "custom everything" - obvious work includes the seat/subframe, exhaust, air filters, headlight, windscreen, and hand guards. What do you think of this - would you ride it? Find this GS-based scrambler for sale in Springfield, Missouri for $3,000 here on ADVRider (registration required).

An electrical engineer in New Hampshire has unfortunately passed away and his wife wants his interesting classic BMW collection to be sold off as a package. We've got a 1956 BMW engine in a Norton Frame, 2 1966 R27s (one black and one white), and a 1969 R69S.

They're all rider quality with varying levels of patina. Mileages vary between 20K and 66K. In addition, there's quite a few boxes of new and used parts. The R69S looks particularly tasty as it's setup for long distance travel with the big tank, deluxe seat, luggage racks, and soft bags. The Norton/BMW hybrid is also interesting for obvious reasons.

Find this collection for sale in Milford, New Hampshire for $45,000 or best offer here on Craigslist.

In 1939 Harley Davidson produced two 39WLA models as prototypes for the US Army to test (along with models from Indian and Delco) at Fort Knox, Kentucky. After the war broke out in Europe the Army bought 400 WLAs designated 40WLA. By the time Japan attacked Pearl Harbor, the next generation 41WLAs were common in the US Military. Between January 1942 and September 1945, H-D delivered over 90,000 42WLAs to the US Military and Allies.

Though there were several configurations of 42WLA (each service had separate requirements in those days) the primary customer was the US Army. Though the Soviet Union steadfastly refused to acknowledge that they received any WLAs through Lend Lease, it turns out that Russia is now the primary source of parts for restorers. In 1942 H-D built 1000 42XA models at the insistence of the US Army powered by a 45 CID horizontally opposed Twin and shaft driven based on the BMW of the time.

The Harley Davidson 42WLA used a 45 CID (740cc) air-cooled side valve V-Twin motor with a three speed transmission that was good for a top speed of 65 MPH. Front suspension was girder and springs while the rear was rigid. There were a large number of options for the WLA based on unit requirements. Bags or Ammo Racks for the rear, scabbard for a Thompson Submachine Gun for the front fork. Almost all were issued with blackout lights fore and aft.

This particular 1942 Harley Davidson WLA is in Washington state and is listed as an original running survivor that was in a private collection for 40 years. Since no numbers are given it is impossible to know how correct this claim is. It almost certainly should have had a blackout headlight installed. There is no picture of the military service plate or the top of the tank and instruments. I would certainly ask the seller about that and those omissions leave me somewhat skeptical. The bike is currently priced at $7,995.00 with reserve not met here on eBay.