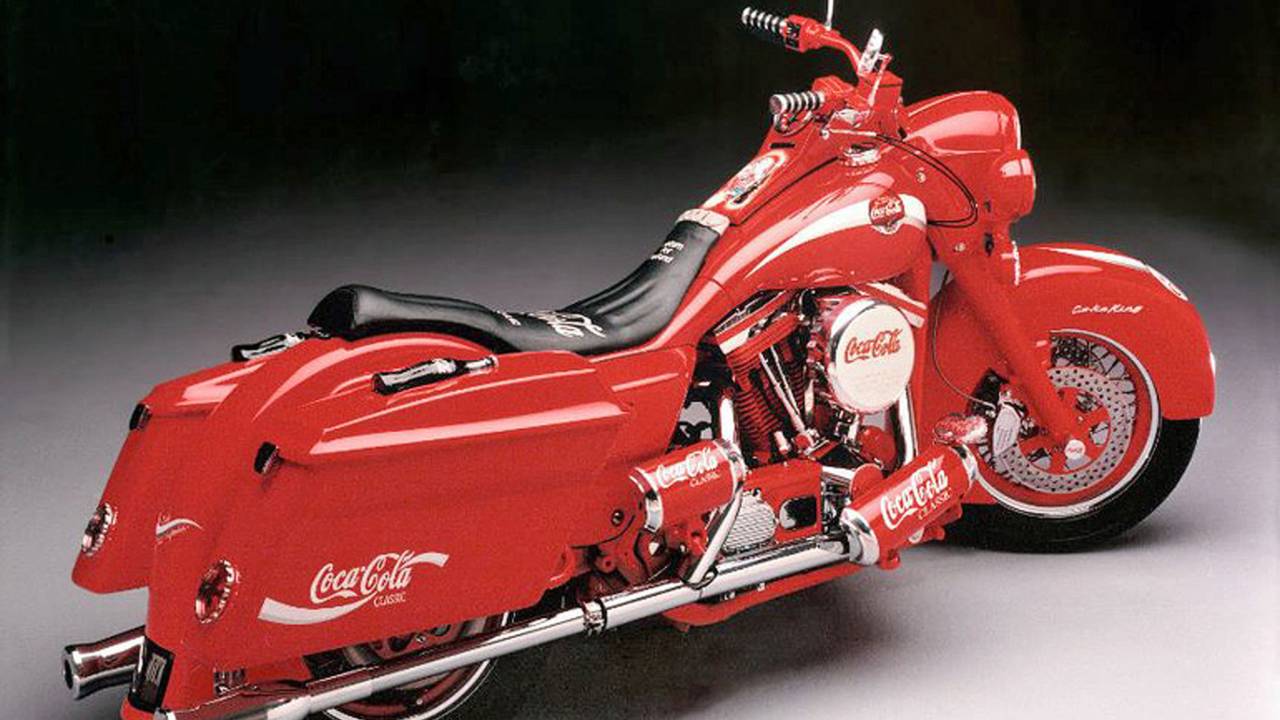 We have a variety of bike-uriosities for you this week. Coca Cola Road King, Africa Twin, a collection of vintage HD to a home built Citroen 2CV.

I know asking prices are just about meaningless compared to actual sale prices, but this is by far the highest asking price for a motorcycle that I've ever featured. Behold the shiny red magnificence of the Coca-Cola Road King, a custom commissioned by the great-great-granddaughter of Coca-Cola's founder. It's been dubbed "the bike that refreshes."

This bike has quite a history - it's the only motorcycle that's been fully licensed to use Coca-Cola's trademarks and logos, and it even features 6 design patents. It'd take you a while to find all the Coke mentions. The motorcycle has led a NASCAR parade lap, won multiple first place trophies in shows, and been featured in all kinds of media. The only thing more crazy than this bike is the asking price. There's also a best offer option if you'd like to lowball.

Find this coked-out Harley for sale in Hilton Head, South Carolina with a BIN of $4,750,000 or best offer here on eBay.

Built by Jason Paul Michaels, this Honda Shadow VT800 (a one-year only bike) was turned into a cafe racer called "Payback." The paint scheme is reminiscent of iconic Hondas like the Black Bomber, though the riding position is quite a bit more aggressive now!

Highlights of this bike (VIN: 1HFRC3208JA001315) include Tomaselli clipons, EBC brake pads, Dunstall fuel tank/seat/mufflers, a custom chromoly subframe, Progressive rear suspension, LED tailights, and shortened forks with Progressive fork springs. What do you think of how this bike ended up?

Find this VT for sale in Orlando, Florida with bidding up to $2,700 and the reserve not yet met here on eBay.

Harley Davidson built the Hummer model from 1955 to 1959. It was a stripped down model that used a 125 CC two stroke for power. But there is much more to the story. Harley Davidson, BSA and a Soviet company were awarded the design of the DKW 125cc two stroke single motorcycle design as part of WWII reparations. All three built full on copies of the bike and sold them domestically.

Though the Hummer (named for a leading dealer) was only from ‘55 to ‘59 the whole run of two stroke singles has grown to be known as ‘Hummers’.

The HD ‘Hummer’ line up went through many changes over the 18 year run. It started with a girder and friction (rubber band) front suspension which became hydraulic in ‘51. 1953 saw the 165cc and ‘55 a very stripped down 125cc variant (the Hummer). 1962 saw an increase to 175 CC. The 1966 Bobcat had ABS resin single piece body work that covered the tank and rear fender. It also supported the seat.

This collection from Chillicothe, Ohio has 12 (twelve) Hummers in it, including two Bobcats and at least two with the girder front suspension, both of which are said to be rare. There is clearly something for every Hummer lover in this collection which comes with a spare ‘46 basket case and a Yamaha dirt bike. This is a real ‘grab bag’ collection and is priced at $30,000 Buy It Now or Best Offer here on eBay.

The RD04 generation of Honda's legendary Africa Twin was produced between 1990 and 1992 - it was the second generation. The styling was quite similar to the first gen but it got a new 742cc V-Twin engine, improvements to the chassis, and triple disc brakes.

The AT was based on Honda's impressive desert racers, which had good success in competitions like the Paris-Dakar rally. It produced "just" 61 horsepower but the goal was for long term reliability and easily managed output, not winning drag races. That's why this bike has a stellar reputation for reliability (though of course, it has some issues). Many riders have seen six figure readings on their odometers. And if I do say so myself, this looks much better than most modern big enduros.

This example (VIN; RD042100819) has 66,282 miles which has been "just freed from its shipping container." The seller says there are lots of things to nitpick from a visual standpoint, but the bike runs very well. The seller used to enjoy this bike in the UK and brought it to the US, so you'll need to work out some paperwork. The bike is equipped with a Laser exhaust (stock included) and a GIVI topbox.

Find this Africa Twin for sale in Jonesborough, Tennessee with bidding up to $820 and no reserve here on eBay.

Does the name Emile Leray mean anything to you? He's a French guy who foolishly ignored a military roadblock in northwest Africa and ended up crashing his Citroen 2CV into a rock while crossing the desert. Using a hacksaw and the contents of a 'basic toolbox', he then converted his 2CV into a motorcycle and rode it out of the desert to safety. Why do I bring all this up? Because Emile's crazy conversion was built out of necessity. On the other hand, this featured bike was also built out of a 2CV, but I don't know what the builder's crazy justification was in this case.

The bike is called "Elefant" for semi-obvious reasons, and it features the engine, transmission, suspension, brakes, and even more parts from a Citroen 2CV. The seller has covered over 6,000 miles with it in the last three years, and the sale includes a custom trailer.

Find this 2-wheeled insanity for sale in Slovenska Bistrica, Slovenia with a BIN of $11,000 here on eBay.