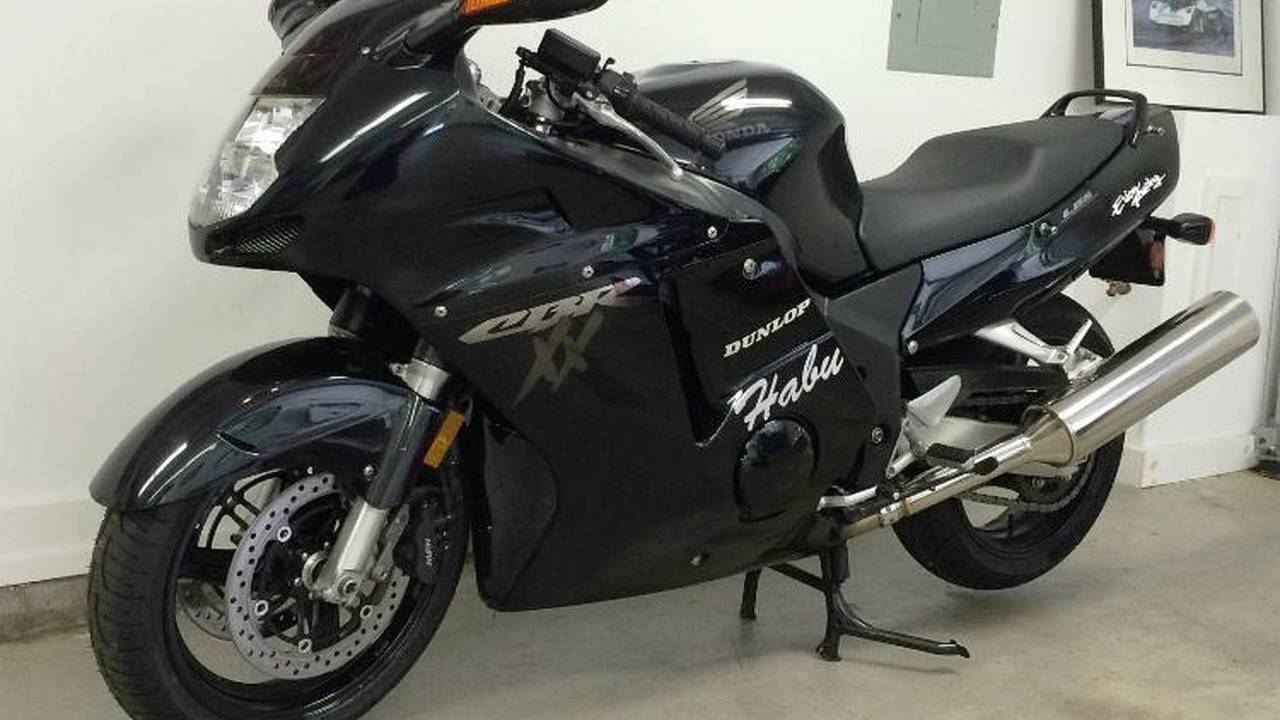 You can bet if Reg owned and rode this Honda CBR1100XX it has been tastefully upgraded and well maintained. He did write the book on riding smooth.

Last week, we had a British bike that was a big hit with American riders - the Triumph Speed Triple. This week, we have a bike formerly owned by a British racer who was a big hit on American tracks - 3 time AMA Superbike champ Reg Pridmore's former 1998 Honda CBR1100XX Blackbird. Now sure, Reg never won for Honda back in the day- and this is not a race bike -but you can bet if Reg owned and rode this it has been tastefully upgraded and well maintained. After all, he did write the book on riding smooth.

And the seller does list a few nice upgrades, the biggest being a genuine Ohlins rear shock on it. You can bet the front for was gone though as well, though that won't help you unless you weigh what Reg weighs and ride the way he does. It also has aftermarket slip on exhausts, which I'm sure wake it up a bit from its stealthy sport-touring sound.

And lets not forget the performance upgrades from sticker tuning- since they are part of what identifies it as Reg's former bike, they must add something. Habu, by the way, is a nickname given to the original Lockheed SR-71 Blackbird supersonic recon plane, parts of which are still classified, but it is also a deadly venomous Japanese snake, so it really works well for this extremely fast Honda. The Erion Racing stickers on the tail section go with the Erion Racing slip on mufflers also installed, so those work too.

I don't doubt this bike belonged to the man who won the 1st, 2nd and 3rd AMA Superbike series championships in 1976-78, it would be too easy to prove false. The man is still alive and online and runs track day schools all over the country - called the Reg Pridmore's CLASS Motorcycle Schools. It is just too bad the seller doesn't have a picture of the man with the bike and an autograph, at least.

Now enough about the bike- it is a nice bike -and how about some more about Reg? Reg was born in the UK and came to California as a young man. In 1976, when the AMA started racing street bikes, he was one of the riders on the Butler and Smith (the US BMW importer) official entry into the series. The R90S they built and he rode was partially responsible for changing the image of BMW worldwide in the 70s.

He beat all the overpowered, under-developed Japanese 4-cylinder bikes with a combination of predictable handling and smooth riding.

And the next year- and the year after that -he went back and showed the Japanese factory teams exactly what they were doing wrong with the help of Craig Vetter and a Kawasaki KZ1000.

Here is what the seller has to say about this bike, which currently resides in Tryon, NC: "1998 Honda CBR 1100 xx. Excellent condition. Second owner. Reg Pridmore . 7,800 miles. Basically stock with a few cosmetic changes and Ohlin's rear shock. Never dropped or down. Small crack in leading edge of front fender. Tires are new. An unusual bike."

You can find it here on the Panjo RideApart marketplace listed for $6,500, but it has been listed on eBay in the past for just $6,000, so maybe email the seller a lower offer?