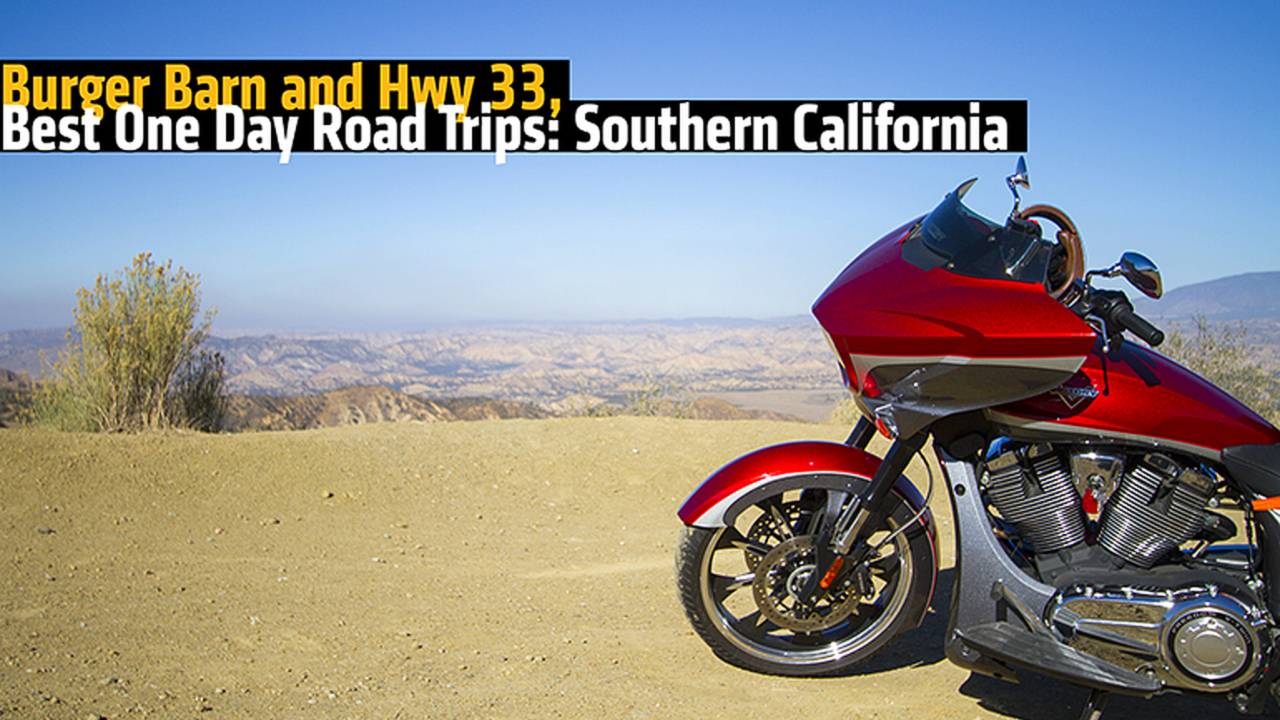 With directions that simply read, “head north,”a few pairs of underwear, my trusty Canon, $300 in my wallet and keys to a Victory Magnum - what could go wrong?

This is the first installment - with more to follow - of the best day trips you can take on your motorcycle in your area, or maybe a road and scenery you’ve never ridden through before. We start off the series with a Southern California route you may be unfamiliar with. A couple hours north of Los Angeles, it’s a lesser known path through the Los Padres National forest.

While this was a two-day road trip, we've decided to break it into two segments. The first being Hwy 33 past Ojai and the second leaving Santa Barbara taking the lesser-know route back to LA. You can easily do this entire route in a day, but with the girlfriend on the back, lack of preparation, cold nights and the fact that it was vacation and we weren't in a hurry, we decided to take our time.

Starting in Norwalk, California we headed up and out of the city via Hwy 1 in Santa Monica, up through Malibu, stopping for lunch at an overpriced hipster cafe and then up into Oxnard, onward to Santa Barbara. As we exited Ventura, I asked my girlfriend if she wanted to go to Ojai. She pointed towards the highway sign with affirmation.

We headed up Hwy 33 into Ojai to spend the night. The next day we rode up through twisty mountain roads, then back to Hwy 1 and down into Santa Barbara.

We wanted to avoid repeating any of our steps as we made circling loops through the area. We first jumped off the 101 Hwy (Hwy 1 and Hwy 101 share the same road on and off again through most of the California coast), and traveled towards Ojai via Hwy 33. Starting out as a four-lane highway, it steps through a couple small towns. Watch for speed traps!

Arriving in Ojai our first night, we stayed at the Chantico Inn, a very cute and luckily inexpensive (around $100 for the night) lodge with wine tasting in the evening and a jacuzzi in the room.

We rode up to the Deer Lodge for dinner after seeing some of Hwy 33 through Bear Creek by the state park. After dinner and returning to the hotel we parked the bike walked to the local bar for a drink and game of pool.

The next morning we ate a small breakfast at the inn and headed up for a short hike and beautiful view of the town, before hitting the road around 11am.

I decided to see more of Hwy 33 and vastly underestimated the route; our plan was to stop in Santa Barbara for candy on the pier (motorcycles park for free) and a night in another inexpensive hotel (which also cost $100 a night). We made it, only with about three more hours of riding than I originally planned.

Hwy 33 wraps up and over the first mountain range, into a valley and finally out on the other side where it meets with Hwy 166. At the intersection the road is flat and open, surronded by mountain ranges in every direction.

At the beginning of the route you run through overhanging trees and zig zag over Bear Creek, entering through a tunnel into the mountain, then over the creek again. The state park, hidden in the woods, was closed for the season and there were a couple little inns and spas that were seemingly abandonded years prior.

Making our way up onto the second mountain range we stopped at an overlook to eat some snacks about halfway through Hwy 33.

Hwy 33 is extremely quiet and remote, making it a great road to ride. Although, I wouldn't have ridden my personal bike as I don't trust its reliability. If you get stuck out here, you're stuck.

The views are phenomenal and the twists are a perfect blend of tight turns followed up long swooping turns. Luckily about 80 percent of the turns were not blind making it easy to ride through the mountains hard without any worry of what was around the next bend.

We were there on a Monday, which may not be an accurate estimate of weekend traffic, but it was extremely quiet often riding for 30 minutes without passing another car.

Just like 33, 166 is desolate with the occasionally tiny market every 30-50 miles. Here are more trucks and cars, but plenty of areas for passing. The stretch of highway is surrounded by mountain ranges in every direction that are all roughly 50 miles in the distance. You're able to see mostly what's in front of you for miles… cough… like cops… cough.

We were starving by late afternoon and stopped at the Burger Barn, a place I had once visited while on a road trip to the Mojave Mile. A good burger with fried mushrooms and a Cherry Coke in a can. I couldn't have asked for anything better at that moment.

Hwy 166 eventually turns back into entertaining twisties and we finally made our way onto Hwy 101/Hwy 1. If we had left earlier in the day, I would have preferred to travel through Solvang, a cute Danish-themed town, for dinner and then finally Santa Barbara for the night, but this being yet another cold night in December caused us to head into Santa Barbara in a hurry.

The next day, we started again kind of late - can you blame us? It’s vacation, dammit - eating breakfast on the main street through Santa Barbara, visiting a couple of shops (one of the only times I’m happy with limited storage space on a motorcycle).

The pier offers free parking for motorcycles and close to the highway.

Jumping on Hwy101, I immediately got tired of the highway, so we jumped right back off onto Hwy 150 to visit  Lake Casitas, which spreads throught a misshapen valley. It made for a beautiful, twistie route that opened up to a beautiful view of the lake, roughly 10 miles off 101.

If you don’t want to take this road back, you can visit the lake from the first part of the route, a couple miles west of Hwy 33. The way we took allowed us to not see the same patch of asphalt twice, except when traveling back through downtown Ojai.

We took Hwy 150 to Hwy 126 stopping for dinner in Fillmore and then all the way to Hwy 5 which took us home again.

6-7 hours (including down time), 4 hours according to Google Maps.

Great roads and beautiful views at the many pull-off areas.

Beautiful view of the lake

Cost: I’m far from rich, but both towns (Ojai and Santa Barbara) are filled with expensive resorts and hotels. Luckily, Santa Barbara has little college hotels north side of town and Ojai has a couple inexpensive inns.

Things to Note: We did this trip on the off-season, and both locations can be filled with tourists who actually make reservations. Remember the basics of traveling, like tour a hotel room before buying a night.

Probably 80 percent of the curves are not blind.

Smooth, fresh pavement in many of the areas.

You have to ride hours on long, boring stretches of road to find the good stuff.

READ MORE:  Hero MotoCorp Coming to the US, with Help from Tiger Woods and Erik Buell