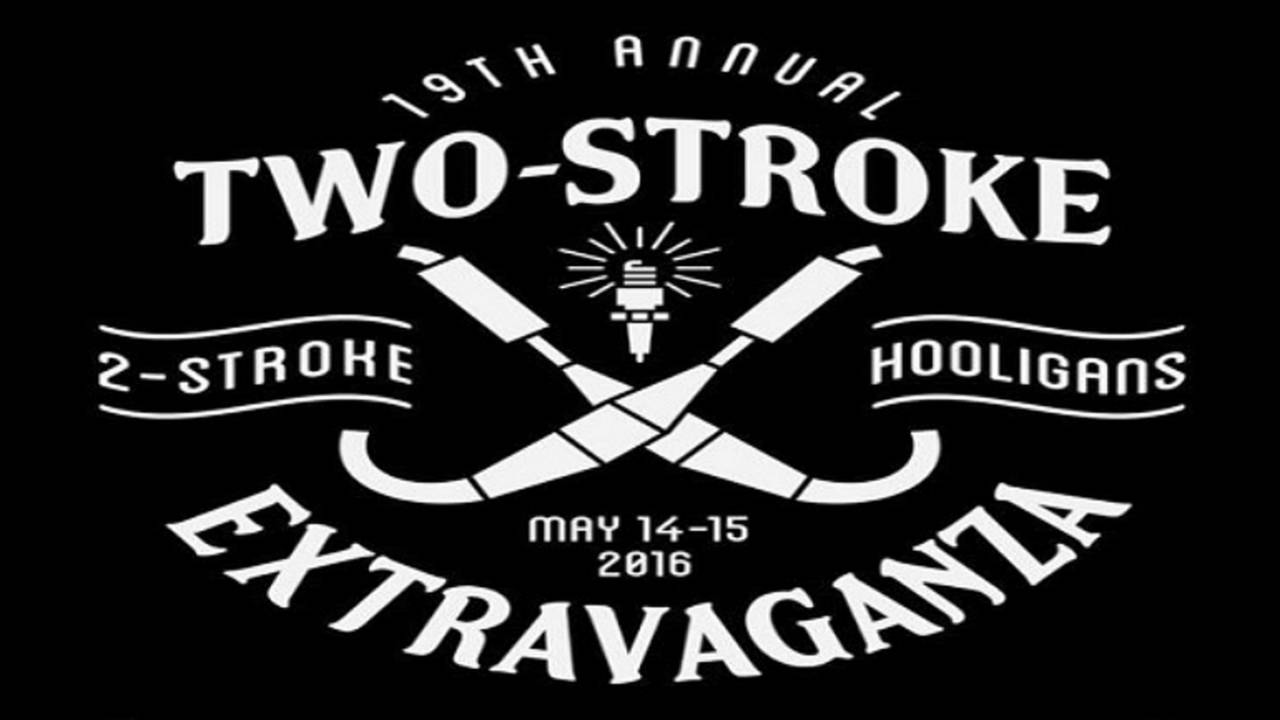 It's hard to believe that at one time, small displacement two-stroke street bikes were both huge sellers and the sportiest bikes you could buy. Besides K.O.-ing the British and giving Harley a shiner, Honda's bulletproof four-stroke bikes combined with emissions regulations killed the entire two-stroke breed by the mid 1980s... but only in this country. In Europe, Japan, and even Canada there were amazing motorcycles that were basically detuned versions of the GP bikes of the era — with lights. The Southern California Two-Stroke Extravaganza, now in its 19th year, celebrates these forbidden fruits, as well as older and more common models.

The perennial favorite is of course the Yamaha RD350, but Kawasaki 350, 500, and 750 triples are popular too, as are older street legal dirt bikes from Yamaha, Hodaka and others. What people really come out for though are the grey market imported bikes like the Suzuki RG500 Gamma, Yamaha RZV500, and Honda NSR400. As if having an already rare (about 9000 made worldwide, and just a handful snuck into the USA) Gamma wasn't enough, some people have to get even rarer — like this one.

The owner of this bike took the stock Gamma, ditched everything but the motor, bolted it in a custom Spondon frame and swingarm, and added Ohlins suspension and Bembo brakes. Unless you can fool the DMV into letting you hang a plate on Kevin Schwantz's actual race bike, this is as close as you're going to get to a 500cc Grand Prix bike on the street.

Even the stock RG500 square 4 two-stroke is an amazing sport bike for its time. The official specs have it making nearly 100hp and weighing about 380llbs, ready to ride. The Suzuki GSX-R750, which was considered impossibly light when it came out in 1986, made the same power and was about 30lbs heavier!

Yamaha has always been known for two-strokes, as the last company to sell them here in any large numbers, and their answer to the Gamma was the RD500LC, or this Japanese market RZV500R variation. It made less power in street tune than the Gamma, but the GP versions were more evenly matched.

Yamaha RD350 bikes, and even tricked out RD400s, are so common here we didn't even snap any pictures, except this one. Roland Sands may be known these days as a custom bike builder and lifestyle purveyor, but from 1994-2002 he was a pro-level road racer, often on 250cc two-stroke bikes. This custom he built uses a tricked out Yamaha RD motor, custom fit into a race bike frame from that era, with serious brakes, wheels and suspension.

What few Wankel rotary engined bikes there have been over the years don't have a show of their own. The Hercules was a dismal failure, in street and dirt bike guise, the Norton never really made it to market, and the Suzuki's were a sales flop. But, the novelty and outcast status of the rotary makes it welcome with the other smokers. I like to think of the Wankel as a three-stroke motor myself.

Of course, if you have an interesting, obscure car or bike event in the L.A. area, Jay Leno is going to show up on something interesting. He rode this 1920s Scott Flying Squirrel not only to the show, but also rode it out to Newcombs Ranch on the Saturday group ride. Jay just likes getting out with like-minded people and riding/driving his collection. The Flying Squirrel was a motorcycle ahead of its time, with water-cooled cylinders and 34hp from 600cc and 350lbs. It has been said that while other motorcycle companies were still making motorized bicycles, Scott was making an early version of the RZ350.

This event happens every year, though not always on the same weekend or at the same location. Originally started by Yamaha RD specialist Moto Carrera, it's now being put on by the people who run the USA 2-Strokers forums. If you want to make sure not to miss it next year, start hanging out in the forums, or like their Facebook page.