How to Win a Motorcycle Slow Race 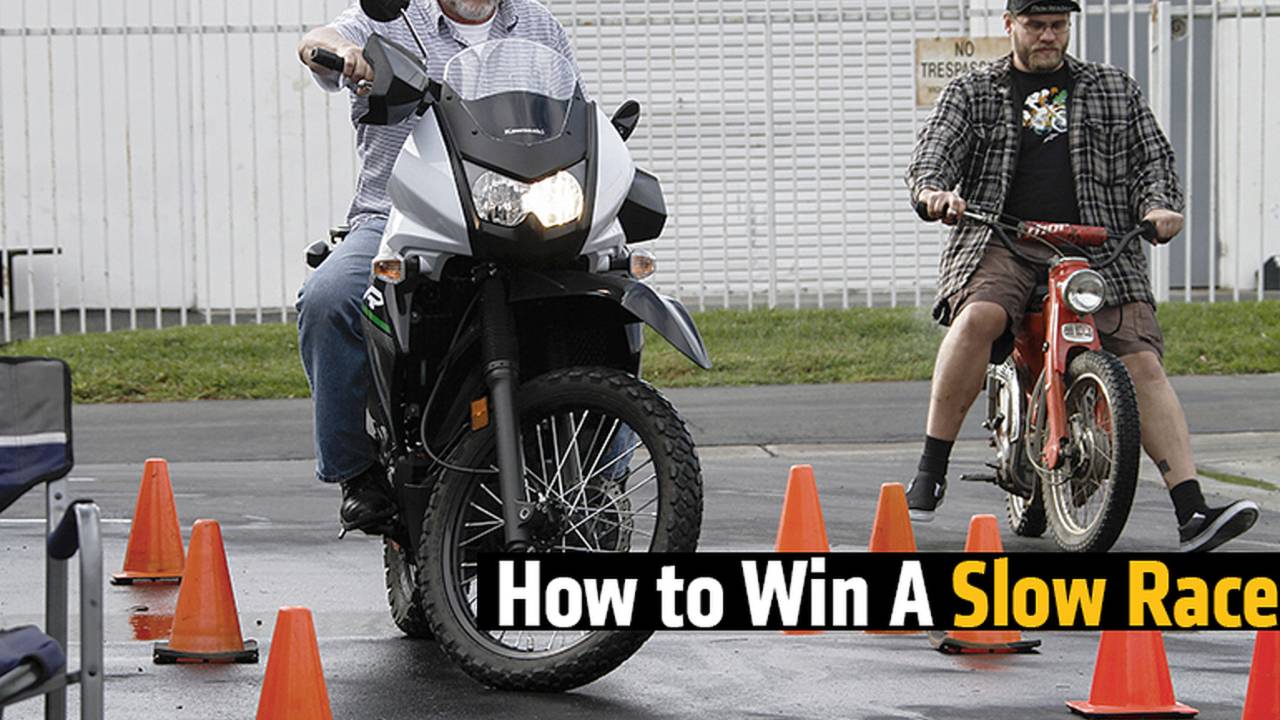 How to Win a Motorcycle Slow RaceWell, if you want to know how you win then maybe you shouldn’t ask me because on this day, I didn't win. I’ve tried...

Well, if you want to know how you win then maybe you shouldn’t ask me because on this day, I didn't win. I’ve tried my hand at professional racing, track days on motorcycles and cars, schooling on and off the track, and still one of my favorite things in the world is a good motorcycle game.

MUST READ:  Competing in the Bixby Moto Slow Race | RideApart

We heard about the Bixby Moto Slow Race via social media. It was the first free Saturday we had in a while so we headed out for the event, armed only with our 2015 Kawasaki KLR. First rule, don't take a big bike to a slow race. The KLR was a laughable entry at first, being surrounded by scooters, step-throughs and small-cc dirt bikes, but it was surprising fun and competitive. Read all about our fun at the READ MORE link above.

You’re competing against your opponent, not against yourself. If you gain the lead (behind the other rider(s)), it’s not necessarily the best move to slow down or push yourself harder. On multiple occasions, the person winning throws a foot down; therefore, losing. Like scratching on the 8 ball, you can be in the lead and one little slip up causes you to lose.

Well, that’s redundant. We found that second gear on the KLR was perfect—never fully releasing the clutch. Yes, it was a bit rough on the bike, but the KLR is a tank and never showed any signs of wear. We did ride it around the block a couple times to cool it off.

We arrived way too early and wandered the shop before our few laps of practice. I decided to run back to the gas station. My trick was to fill up all the way, this was to limit the room for the gas to slosh side to side and potentially throwing me off balance. Some say run it empty, but we didn't know how long the event would last. Either way, don't fill it half full, either completely full or almost nothing in the tank. Fuel sloshing in the tank will greatly throw off your balance.

There’s a fine line with this move. If you aggressively turn back and forth it’ll throw off your balance, but if you go too straight you’ll get there too soon.

Only use the rear break, this will keep weight in place and not shift it forward, and again, throwing you off balance. You want to be able to smoothly drag the brake, any hard grabs of the throttle or brake will throw you out of whack.

Our Kawasaki was surprisingly easy to handle at such slow speeds on asphalt—remember we had thumping, knobby tires. Typically, the real winners rode older dirt bikes and scooters. A dirt bike is even better than a scooter because you have your feet on either side of the bike, giving you a mental release as you don’t have far to put your feet down. You also have the balance of your body on either side of the bike.

Keep Your Butt on the Seat

Body movement is very important on a motorcycle, but if you’re sliding your butt back and forth on the seat, it’ll throw you off balance quick. As for typical street riding, you do want to use your upper body to steer the bike. Lean against the direction you want to go at low speeds and push the bike away from yourself.