The Sturgis Rally, Then and Now 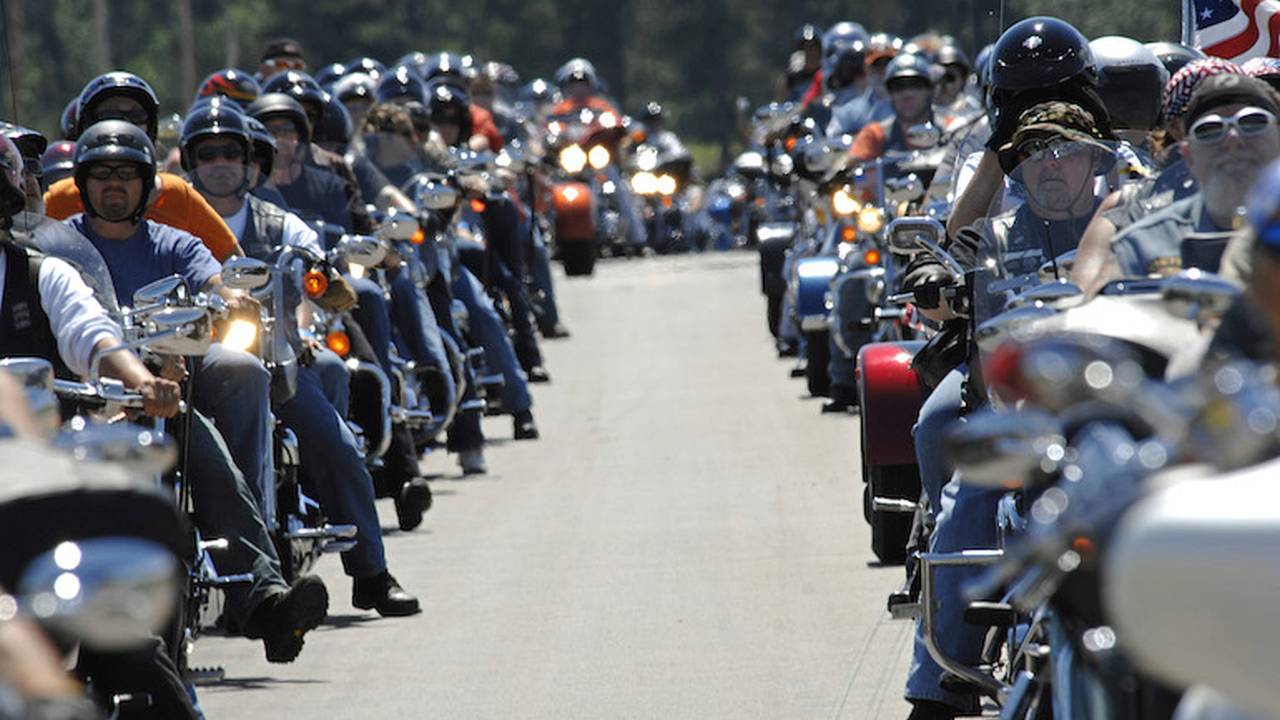 Thinking of attending the world's largest motorcycle rally this summer? Here's a little background on the Sturgis Motorcycle Rally.

Few motorcycle rallies have lasted 77 years. The Sturgis Motorcycle Rally – now sometimes referred to as the Black Hills Motorcycle Classic – began, as the story goes, in 1938 when J. C. "Pappy" Hoel and some riding buddies formed the Jackpine Gypsies to organize rides and races in the Black Hills area of South Dakota.

On one such group outing one of the riders struck and killed a stray pig on the road. Being upright, honest American lads they went to the farmer’s house and offered to pay for the animal. The kindly owner, properly impressed, not only refused payment but donated the pig to the club. The members thereupon decided that the right thing to do was have a party and a pig roast.

Dot Robinson of the original Motormaids on her Harley Knucklehead – one of the early Sturgis attendees.

The rest is history. Americans don't need much of a reason to party and if the party is a good one we don't need much of a reason to call it tradition. This is why white people in Maine celebrate Cinco de Mayo and why art students who have never thrown or caught a ball watch the Super Bowl. The very good reasons of motorcycles, camaraderie, and beautiful scenery helped ensure the popularity of this tradition, though, and when the 50th anniversary of the event took place in 1990 more than a quarter million people turned up to celebrate.

It's hard to say exactly why, but over the next 25 years the event exploded in popularity and by the time the 75th anniversary rolled around in 2015 almost 750,000 people were cramming into (and around) the small town that is normally home to just 8,000 residents. The entire population of the Mount Rushmore State numbers just more than 865,000 according to the always-reliable Wikipedia. So, it's not hard to imagine that within a few more years Sturgis attendees will outnumber South Dakota residents.

It's sometimes been joked that the state should simply be renamed "The People's Republic of Harley-Davidson." To do so, however, would draw the ire of Indian Motorcycle fans, who would be quick to point out that the Jackpine Gypsies were an Indian-focused club. Certainly there was a time – not that long ago – when the Sturgis Rally felt as if it had morphed into a Harley-exclusive event, to the extent that Harley-Davidson has a permanent plaza location in the heart of the town. But in recent years, the age-old rivalry between Springfield, Massachusetts (now Medina, Minnesota), and Milwaukee has been revived. First in the showrooms and now on the race track.

When Indian Motorcycle was resurrected in 2014 it came back in a big way, drawing a crowd of thousands in unveiling its new models.

In some respects, the traditional expressions of brand loyalty were good-natured jibes at the other team’s stature, largely in the nature of Coke vs. Pepsi, Ford vs. Chevy, etc. This little ditty was posted on the wall of Sam Pierce’s Indian shop:

"If I had a Harley

I’d leave it for a thief,

And with the insurance

(Pierce, by the way, is a legend in classic Indian Motorcycle circles. Fiercely loyal to the brand, he attempted to resurrect it in 1968 – the original Indian Motocycle having shut its doors in 1953)

But in the companies’ corporate boardrooms, the contest was anything but fun and games. For more than 40 years the two titans of American motorcycle manufacturing were the precursors of IBM vs. Apple. In every market – recreation, commercial, police and military – Harley and Indian each used every tactic in the book to gain the upper hand, and invented some new ones. Now the battle is rejoined. Traditionally the first big gathering of the clans takes place at Daytona Beach; they will meet again several times over the summer, with the biggest and loudest convocation taking place within eyeshot of Washington, Jefferson, Lincoln, Roosevelt and Crazy Horse.

Whether the renewed rivalry – in the showrooms and on the track – will herald a new golden age for American motorcycles remains to be seen (We think it will –Ed), but the bravura melodrama is good clean fun in the meantime.

The Black Hills region offers some incredible riding (though, it's best seen at a different time, to avoid crowds).

But while Harley and Indian are back at it on the track, the open road remains a shared venue. Harley-Davidsons, and any pre-1984 American motorcycle, are welcome at the Indian Motorcycle and Classic American Iron Black Hills Rally at the Buffalo Chip CrossRoads on Tuesday, August 4. This free event, sponsored by American Iron Magazine and Dennis Kirk, offers trophies and the chance to have your bike featured in American Iron Magazine. In addition to the motorcycles on display, you’ll find yourself transported back to the early days of the rally with classic Sturgis events like slow races, kickstart contests and plank rides.

The entertainment calendar at Sturgis features more than vendors, contests and racing of course, including the constant ebb and flow of the Main Street mingle and parade up front, and generalized goofiness that make up the real show. There’s the Motorcycle Museum and Hall of Fame, with photos and memorabilia going back to the rally’s beginning, The Mayor’s Ride (Presented by Jack Daniel’s) to Mount Rushmore, The Good Ride (sponsored by Indian Motorcycle), the Beard and Moustache Contest, Street Food Throw Down, Tattoo Contest, Ride With a Local, and the Sturgis K5 (foot race).

Then there’s the steady roster of rock ’n roll and racing at the Buffalo Chip Campground. The lineup includes the Doobie Brothers, Lynyrd Skynyrd, Blackberry Smoke, Ozzy Osbourne, Blink-182, George Thorogood and the Destroyers, and countless other acts that sound perfect when blared from the stereo of a 1983 Ford Econoline van.

The above are just a small sampling of the goings on. Fleets of riders are to be seen in the weeks before and after, but the official dates of the 77th Annual Sturgis Motorcycle Rally are August 4-13. For more information visit sturgismotorcyclerally.com