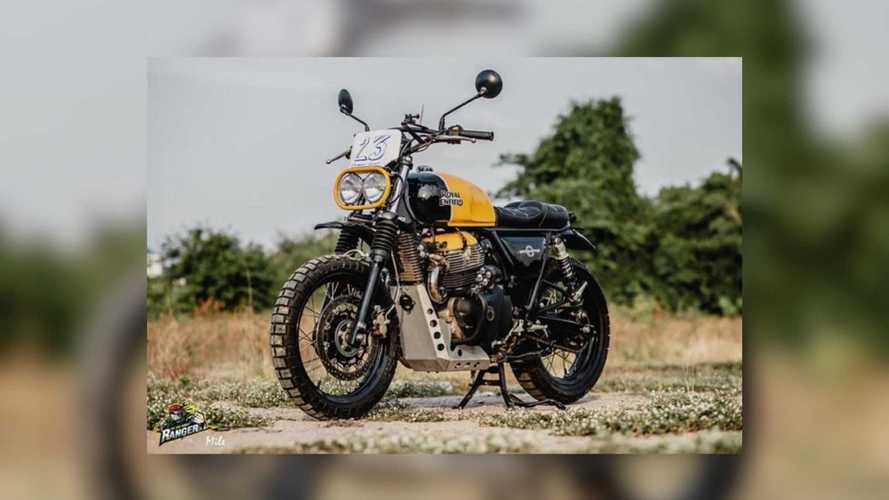 This bike's a neck breaker both on and off road.

Without a doubt, Royal Enfield has propelled itself into the global scene with the introduction of the 650 Twins—the Interceptor and Continental GT in 2018. Presenting themselves as extremely good value for money motorcycles when compared to other players in the classic-styled segment such as Triumph and Harley-Davidson, the Twins have become cult classics in the lines of retro-modern motorcycles. This has been proven by Royal Enfield’s massive sales growth in Europe and Southeast Asian markets, as well as their introduction to the American market since 2018.

Their successful sales across the globe and undeniably simple architecture meant that it was inevitable for the 650 Twins to find themselves as a favorite among custom motorcycle builders. There is no shortage of custom Royal Enfields, with builds ranging from totally botched creations to total masterpieces. One recent build in particular has caught our attention because of how simple yet striking it is. Coming to us all the way from Thailand, this custom Royal Enfield Interceptor 650 was built by Ranger Korat and employs classic scrambler styling.

For starters, the front and rear fenders have been ditched in favor of custom, shorter units giving off an unmistakable scrambler look. A custom belly pan further accentuates this look. A pair of custom round headlamps adorn the front end, giving it a very desert runner kind of vibe, complemented by the custom seat assembly and dual sport tires. A set of custom crash guards were also mounted onto the bike to protect its vital components in the event of a crash or tip over, where auxiliary lights have been mounted to add visibility during long distance touring at night.

Topping off the build is a rather striking paint scheme featuring yellow as its main colorway. Combining yellow and black with a touch of white accents gives off a strong contrast and accentuates the bike’s scrambler design. Even the seat comes with yellow stitching over the simplistic black leather. As far as mechanical modifications are concerned, Ranger Korat has left the bike mostly stock. The Royal Enfield Interceptor 650 retains its 648cc parallel twin with 270-degree firing order. This is understandable, as the bike’s performance is pretty decent—more than enough to have a good time on and off road—with 47 horsepower.