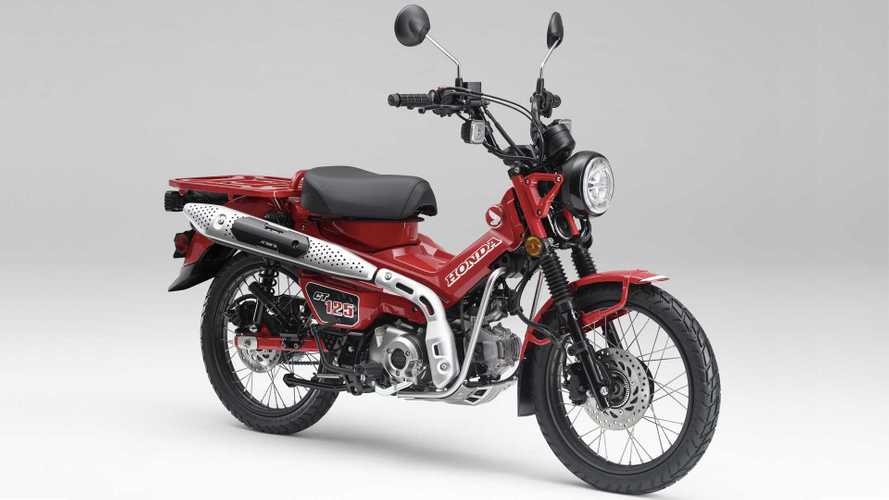 Ever since the CT125 Concept was showcased at the 2019 Tokyo Motor Show, we’ve been (not so) secretly hoping that it would make it to production. Between a few trademarks and a design patent, it looks like we were on track to see the model formally introduced before the end of the year. The ultimate confirmation came when we spotted the CT125 in the list of models Honda plans to showcase during its Virtual Motorcycle Show on March 27, 2020. Prior to the model’s official debut, Honda set the tone and shared the new mini moto’s specs on its Japanese media site. So here's everything we know about the new Honda CT125 Hunter Cub.

The Hunter Cub is an outdoors-y spinoff of the Super Cub we already know and love. The two Cubs share the same chassis, with a few modifications to give the CT a more scrambler-inspired, off-road-capable look and feel.

While the Super Cub has a clean silhouette, with all the cables, wires, and inners hidden away under a sleek semi fairing, the Hunter Cub looks more rugged without the cover, exposing the frame, the engine, and all the wiring. The Hunter also receives a set of wire spoke wheels, crash bars, and a little luggage rack to complete the look. It has a slightly longer footprint with its 49.4-inch wheelbase and a bigger fuel tank capacity at 1.4-gallon (versus the Super Cub’s 1.0 gallon). The CT weighs in at 264 pounds (versus 240 lbs for the Super Cub.)

The exhaust is re-routed and ends on a high-set muffler equipped with a protective shield. The Hunter Cub’s underbelly also receives a skid plate to protect the engine. At the front, the CT uses a fork with 4.3 inches of travel versus 3.5 inches on the Super and support at the back is provided by a pair of exposed shocks. As for the brakes, while the Super Cub features a disc brake at the front and a quirky drum brake at the back, the Hunter Cub gets disc brakes on both wheels, paired with ABS.

The new Honda CT125 Hunter Cub will be offered in “Glowing Red” and “Matte Fresco Brown”, according to Honda’s Japanese site. We could expect the model to eventually integrate the European and American markets considering the trademarks and patents have been filed here as well though Honda has yet to confirm that information. The model will officially debut during the Honda Virtual Motorcycle Show and is expected to go on sale in June 2020 in Japan.