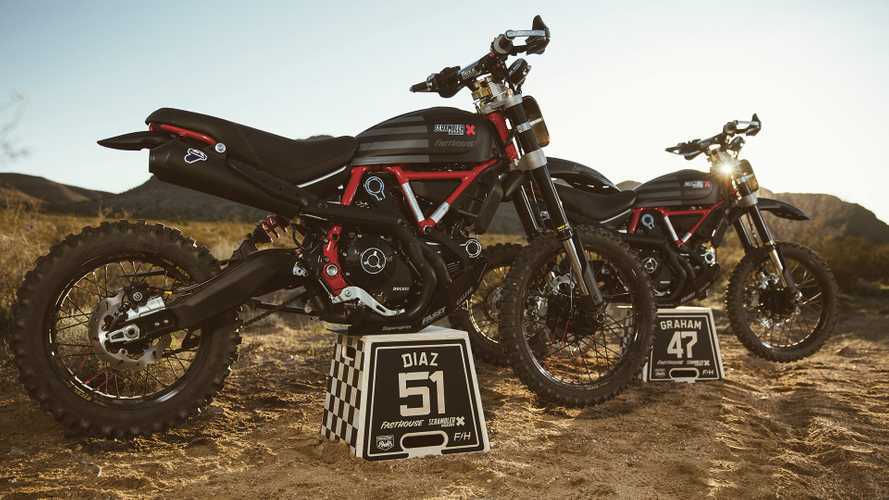 Not just a pretty face.

At the end of 2018, Ducati introduced a quartet of new Scrambler models:  the Icon, the Full Throttle, the Café Racer, and the Desert Sled. While each version is mainly accessory packages, they highlight the Scrambler’s versatility and showcase its different personalities. The Desert Sled model takes the Scrambler’s off-road abilities to a whole new level. We have yet another proof that the Desert Sled doesn’t only look the part, it also plays it very well as Fasthouse Scrambler Ducati rider Jordan Graham took the first place in the Mint 400’s new Hooligan Open category.

The Mint 400 is America’s oldest off-road race with the first event organized in 1968. The Las Vegas-based desert raid takes over 550 teams on a 400-mile trek through the Mojave desert. The event was put on hold for a little over 20 years, between 1995 and 2007 before finally sprinting back into action in 2008 and going strong since then.

The 2020 edition took place from March 3 to 8 and for the occasion, the organizers created a slew of new classes, including the Hooligan Enduro and the Hooligan Open. What better way to showcase what your bike is able to do than to win the classes inaugural race? That’s exactly what Ducati did thanks to racer Jordan Graham onboard a specially-prepared Scrambler Desert Sled. Graham took the first place in the class and finish over 45 minutes ahead of the runner up.

Teammate Ricky Diaz, also on a modified Scrambler Desert Sled, didn’t finish the race after damaging his bike in the rock field, breaking the gear lever. The second place went to two-men tag-team of Alexander Smith and Michael Allen, who raced with the number 5 in memory of fellow rider Carlin Dunne, riding on a third Desert Sled.

“A win at the historic Mint 400 is a great achievement, made all the more exciting due to Scrambler’s connection with the spirit of off-road riding in the deserts of the Southwest,” said Jason Chinnock, Chief Executive Officer of Ducati North America. “Both the Scrambler and the Mint 400 story began in the 1960s, so it made sense for us to come together again for the exciting new Hooligan Class."