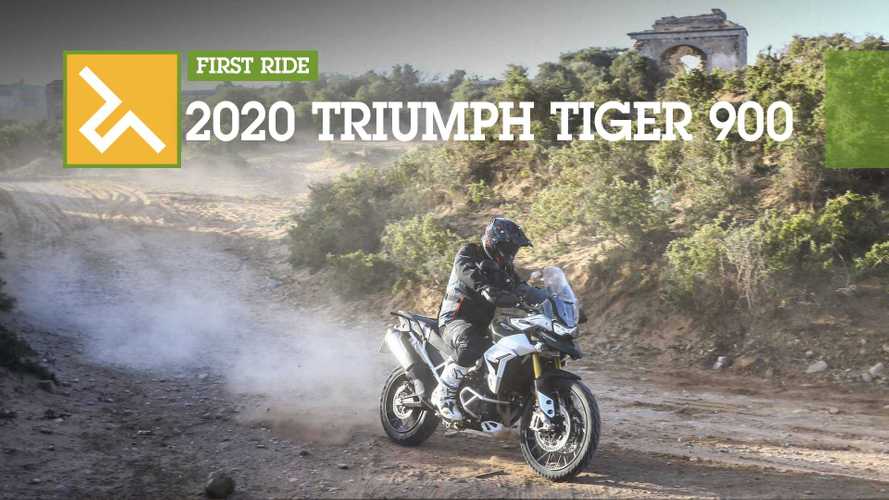 From the roads to the Moroccan dunes, we put Triumph’s new adventure bike to the test. Here’s how it went.

For 2020, Triumph sharpens its claws and upgrades its most adventurous model. The new Tiger is bigger, better, lighter, and sells the dream of limitless adventure.

Going On An Adventure:

Triumph has redesigned the new Tiger 900 from the ground up. The design channels Triumph’s classic British adventure styling combined with a more modern, sinuous silhouette and a slimmer headlight cluster. These updates were inspired by Rodolfo Frascoli’s Triumph Tiger Tramontana concept, built for the Panafrica Rally.

The naming convention also changes: the XC and XR are dropped and two new versions join the base model. The GT is equipped with a set of 19-inch wheels while the Rally is fitted with spoke-wire rims and a 21-inch front wheel.

While the base model keeps its five-inch screen, the two higher trim levels receive a seven-inch TFT display. They can also be outfitted with the PRO package that adds MyTriumph connectivity, Shift Assist, a customizable riding mode, heated seat and grips, as well as tire pressure monitoring.

The Tiger 900’s new engine is nestled inside the steel trellis frame. Triumph’s entry in the crossover segment now features an upgraded 888cc inline triple. The displacement was increased by increasing the bore from 74 to 78 mm while the size of the block remained unchanged, a feat achieved by fusing the barrels.

The British inline triple also has an irregular firing order (1-3-2) thanks to the T-plane crank meant to give the engine more grunt at low rpm. The output remains the same as the previous generation at 95 horsepower but peak power is now reached at 8,750 rpm and torque is rated 65 lb-ft at 7,250 rpm.

Weight reduction measures include a new steel-tube trellis frame that uses smaller tubing which allowed the Tiger 900 to shed 11 pounds compared to the 800. The subframe also changes, now made of aluminum and bolted to the main frame. To increase the model’s versatility, the passenger’s footpegs can be easily removed.

All the versions share the same brake hardware with a pair of 320-mm floating discs with Brembo Stylema calipers at the front and a single, 255-mm disc with single-piston caliper at the back, teamed with cornering ABS. As for suspension, the GT and the Rally receive a trim-specific set up.

About The GT Pro

The riding position is optimized for road usage thanks to a lower stance that keeps the rider closer to the ground and to the handlebar shifted backward by 10mm (compared to the Rally), features that help centralize the weight.

The riding modes considerably alter the bike’s behavior. For instance, the Road and Sport modes change the engine mapping, making it more responsive, and adjust the rear suspension’s stiffness. The Sport mode in particular improves the Tiger 900’s performance and makes it extremely flexible on winding mountain roads, improving the accelerations and stiffening the suspension to delay braking as much as possible.

This is also where the Brembo hardware gets to shine. The set up is comparable to a sportbike and is extremely efficient at slowing the bike down on a very short distance, even when you’re coming in too hot in a curve and need to suddenly pull the brakes. You have the cornering ABS to thank for that.

Navigating the Marrakech traffic in 80°F weather, the Tiger 900 proves that the 800’s overheating problems are a thing of the past. This extra cooling comes courtesy of two separate radiators that more efficiently evacuate the heat and help keep the engine cooler.

Being able to adjust the hydraulics electronically via the instrument panel is also extremely useful and the difference between the settings is obvious, even to the less experienced rider. To take full advantage of the most rigid setting, you need to ride the Tiger more aggressively. Pushing the bike to its limits, you can experience its precision both upon entering the curve and throughout the line. The bike maintains a steady trajectory without the fluttering you might get with a softer setting.

It would have been nice to be able to electronically modify the Marzocchi 45mm fork set up but this is an adjustment you have to make manually. Notwithstanding, its behavior is impeccable and it offers a good balance between comfort and rigidity during sudden braking.

The only feature that could use a bit of improvement is the size of the windscreen; the current shield is narrow and exposes the shoulders.

About The Rally Pro

The Rally Pro version of the Tiger 900 is a serious competitor in the adventure segment. It proved it can face any situation, whether it is speeding down gravel trails or navigating the sand dunes, the bike pulled its weight and managed well in all conditions.

The riding position on the Rally Pro is optimized to offer comfort both sitting or standing on the peds. The height of the footpegs and of the saddle is adjusted accordingly which makes the transition easier, especially for riders taller than 5’9”. This geometry makes the Tiger 900 very comfortable on longer trips, maybe even more so than the GT.

On the Rally Pro, the ABS and traction control can be completely turned off. Low-end power is responsive but predictable so that you remain in control even when losing the tail. In fact, low-end torque has been improved compared to the Tiger 800, making the new model easier to handle for beginners and more entertaining for the experts. You get to feel like a rider in a rally, able to tackle any type of terrain and incline.

The Showa fork offers good support and makes the front end feel lighter than it is, making off-roading easier and reduces the risks of understeering. The suspension components are particularly well balanced, with a softer support up top that becomes increasingly stiffer as it compresses. The supension’s smoothness is Triumph’s crowning achievement on the Tiger 900 Rally Pro. The bike is comfortable to drive on rocky trails but it also gives the rider a lot of confidence over obstacles and at higher speeds. You never truly meet the limits of its abilities, not even when landing small jumps.

Suspension is usually too soft on this type of motorcycle. In this case, however, Triumph has finally managed to introduce an ADV able to meet the expectations of the heaviest riders out there without sacrificing on comfort.

Another great feature of the Tiger 900 are the brakes. The dual discs at the front teamed with Brembo calipers are not only incredibly efficient on the road but also versatile in the bends, even off road. The pull on the brake lever is long and very sensitive and not once did we lock a wheel or lose control of the front end, not even on the more challenging terrain.

Ultimately, the Tiger 900 Rally Pro is one of the best motorcycles in the adventure segment. You might underestimate it’s off-road abilities from the onset but once you get to try it, you discover that it’s extremely versatile. If your goal is to own a motorcycle that’s versatile, comfortable, and able to tackle long trips that you can also commute on, the Rally Pro is the bike for you.