The Kernville Kampout Is Everything That Harley Isn’t 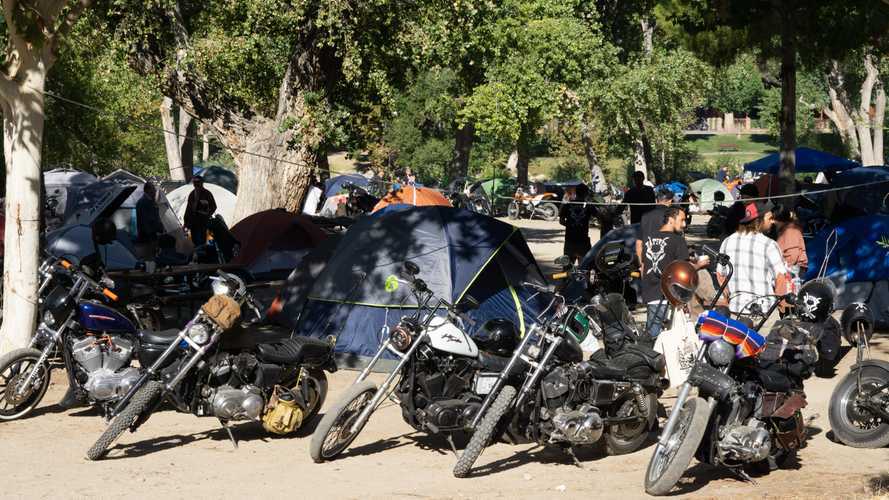 For the past five years, bikers have descended on Kernville, California, during the first weekend of October for Biltwell Inc.’s Kernville Kampout. At a population just under 1,400, the small town 40 miles northeast of Bakersfield hosted over 1,000 raucous riders at the Frandy Park Campground along the Kern River this year. With heavy attendance from the chopper and club-style subcultures within the Harley community, the annual campout appeals to the young demographic that the Motor Company would like to attract.

The Spirit of Sturgis:

Sturgis: The Wild West Of Motorcycling

Based in Temecula, California, Biltwell Inc. is a custom motorcycle parts and accessories brand that specializes in helmets and bolt-on components for retro-styled motorcycles. Primarily catering to Harley-Davidson Sportster and Dyna models, Biltwell has offered affordable custom parts since 2006. Promoting hashtag-able mottos like “Ride Motorcycles, Have Fun” and “More Rollin’, Less Scrollin’”, the company emphasized a carefree, freewheeling nature that allowed them to access young adventure-seekers.

Enter the Kernville Kampout, a three-day camping event sponsored by Biltwell Inc. that mixed the brand’s ethos with the partying image of Harley riders. At only $50 dollars a ticket, the campout offered 2 nights of free booze and festivities along with a campsite to lay one’s (dizzy) head. Like a baby Sturgis of the west coast, the Kampout celebrated bikes, bravado, and booze in one of the most scenic locations in the country. With only a few sightings of Triumphs, Yamaha Bolts, Ducati Scramblers, and one KTM 1090 Adventure R this year, it’s safe to assume that the roar of the v-twin reverberated through the canyons of Kern the entire weekend.

In 2017, I attended the Kampout as a pit stop on my way up to Yosemite National Park. A buddy and I only stayed one night, but the campground offered ample space for two travelers just passing through. This year, the popularity of the event was immediately evident as it took more than 30 minutes to locate a plot to dig in our stakes. Split from our group and sprinkled among other camps, it was clear that space was a premium at this year’s event.

Once we pitched our tents, unloaded the bikes, and rolled out the sleeping bags, the festivities began. With the open bar serving free 805 beer and Sailor Jerry cocktails from 5-10 pm, the noise level only ramped up as the sun went down. After a few helpings of liquid courage, the measurements of machismo commenced. An arm wrestling tournament attracted campers like kids to a schoolyard fight. The grunts of contenders joined the yells of the crowd as challengers fell. A champion was eventually crowned but there’s really no losers when there’s free booze, right?

After the main event, campers milled about the bar or started fires at their site, but those that didn’t get their competition fix with the arm wrestling tournament turned to a more audible alternative. If you’ve ever seen the South Park episode on bikers, you’d know that Harley riders love to rev their machines and the first evening of the Kernville Kampout was a prime example.

First, you heard a motor startup with that unmistakable potato, potato cadence and then an arrhythmic howl of v-twin revs pierced through the cricket chirps. Whistles and hollers accompanied the blasts of exhaust as other camps joined the cacophony. In the spirit of competition, neighboring campers revved their engines in a call and response style. From corner to corner, the screams of v-twin engines continued late into the night.

Exhausted from the ride to Kernville (from Los Angeles) and the racket of the rev wars, I looked forward to what I really came for in the morning: exploring the sights of the Sequoia National Forest.