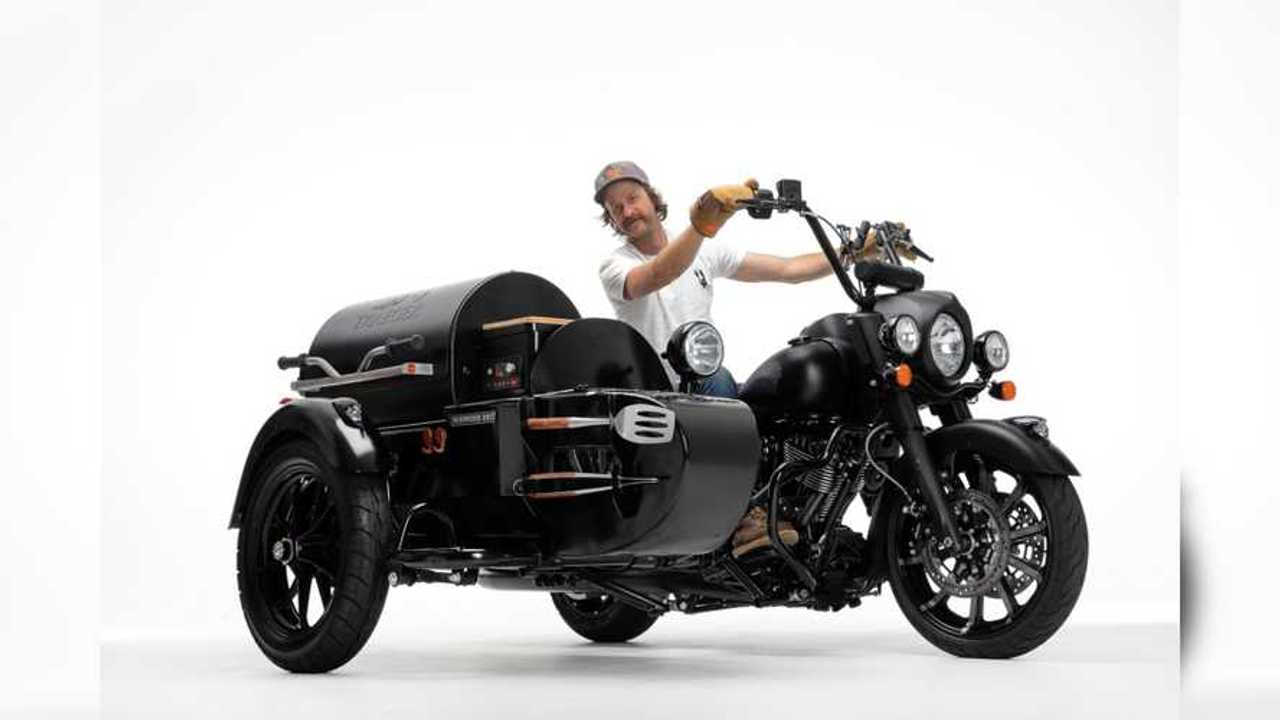 Putting the "smoke" in "smoky burnouts."

Motorcycle rallies and BBQ go together like juicy pork in a well-tended pit. If this sounds like your kind of philosophy, and you’re at Sturgis 2019, you need to visit Indian Motorcycle’s booth this weekend. That’s where they’ll be demoing all the delicious functions of the new Traeger Grills x See See Motor Coffee Co. Springfield Dark Horse. What does that mean for you? Free BBQ samples, cooked on a Traeger Grill that lives in an Indian Springfield Dark Horse sidecar.

From August 2. 2019 through Sunday, August 4, 2019 you can stop by the Indian booth at 3rd and Lazelle to get yourself a plate. This one-of-a-kind Indian Springfield Dark Horse was built by Thor Drake of See See Motorcycles, and matches a fully functional Traeger Ironwood Grill with a Springfield Dark Horse. The grill utilizes wood pellets, and according to Indian, a full video of this project’s planning and build will be posted online shortly after the Sturgis Rally wraps.

In case you missed it, here’s a two-minute video on their Ural with Espresso Machine Sidecar build. With just a few more delicious sidecar food options, See See could have its own food bike festival, easy. Food trucks? Nah. Food bikes.

Back In 2016, India’s BBQ Ride Got The Moto Meat Party Started.

If nothing says ‘summer’ to you like delicious grilled chicken, wings, and burgers over a smoky charcoal grill mounted as a motorcycle sidecar, the Bengaluru-based BBQ Ride bikes are what you crave.

Built on a Royal Enfield Bullet, BBQ Ride founder Arun Varma started his moto BBQ business in 2016 with just one bike. In 2019, newspaper clips throughout India are piling up, and there’s an entire fleet of 50 BBQ Ride bikes rolling around and satisfying at least some of India’s grilled meat cravings.

As you can see from this map, most BBQ Ride locations are currently located in the southern half of the country—but there’s at least one location up north, too. If you’re in India and you love both bikes and BBQ, you need to check one out.