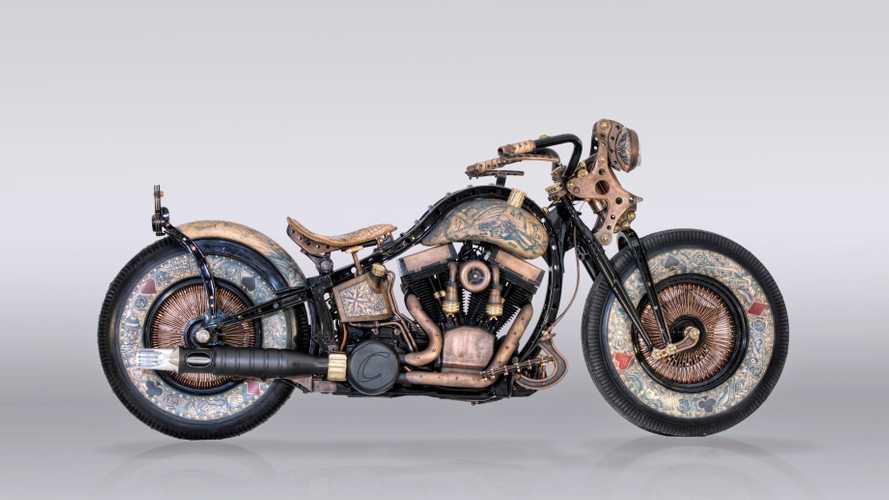 Harley-Davidson motorcycles gained quite a reputation in the years following World War II. Synonymous with loud exhaust, leather chaps, and bar brawls, Harley riders have fostered an image of rebellion. In post-war America, where conformity was of the highest value, tattoos also represented rebellious behavior and permeated the same subcultures as Harleys. To celebrate this intersection, Polish custom shop Game Over Cycles created the world’s first tattooed motorcycle—The Recidivist.

Despite the theme of repeated criminality, Game Over Cycles leveraged one of Harley’s most conservative models to bring The Recidivist to life, the Softail Heritage. For the tattooed appearance, the builders covered the custom gas tank, oil tank, and rear fender in a light cowhide which is “similar to the color of human skin.” While that sounds like something Leatherface or Buffalo Bill would have done, the approach allowed artists to ink up the surface of the Harley.

Along with body art, tattooing tools also inspired numerous components of the build. Game Over Cycles fashioned the girder front end after the coils of a traditional tattoo machine, repurposed modern tattoo guns as ignition plugs, and even outfitted the exhaust with pulsating metal rods that resembled needles.

Practically everything on the bike was custom-built, but Game Over Cycles did keep the 96 cubic-inch Twin Cam motor and the lower part of the stock frame. To maintain the build’s motif, they shaped the top portion of the frame with tubular steel to imitate “the look of a human spine.” Yet another creepy design choice, but at least the team’s committed, right?

If there’s any shortage of machismo in owning a Harley-Davidson, Game Over more than compensated with the Recidivist. The custom shop shaped the brake calipers in the form of handcuffs, created a suicide shifter from an actual crowbar, adorned the tail light with brass knuckles, and modeled the kickstarter after a bomb detonator. For an engine with well-documented cam tension blowouts, a bomb detonator kickstarter may not have been the most thought out mod, but it sure looks cool.

The team completed the build by mounting car tires—tattooed as well—on the 250-spoke rims. We definitely wouldn’t recommend going to the dark side with The Recidivist, but at least the addition of the sidecar will help with stability. According to the Game Over Cycles, construction of the motorcycle and accompanying sidecar clocked in at 3,000 hours and an additional 2,500 hours went into inking it up.

Yes, the build indulgently glorified criminality, but Game Over Cycles knew its audience. The Recidivist has captured 11 awards, including first place in the Rat’s Hole Custom Bike Show at the Sturgis Motorcycle Rally.

If you’re a fan of flesh tones, body art, and Harleys, you can purchase the motorcycle for $1 million on eBay right now. Before you go rushing over, make sure you pack your antibacterial ointment and moisturizer—you’re bike’s going to need it.