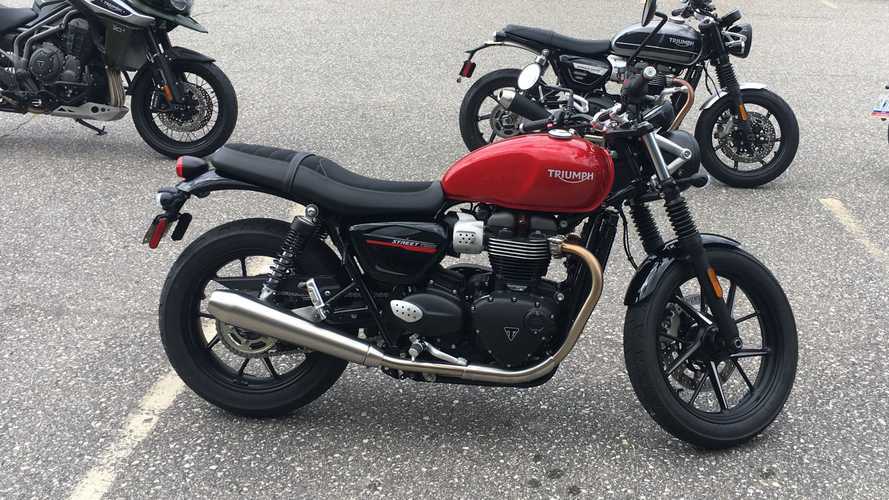 Despite Triumph's long, fabled history in the motorcycle world, I had never ridden a Triumph before. Fortunately, it's demo season and National Powersports Distributors was holding a Triumph demo day, so I decided to educate myself in the wonderful world of fine British motorcycles. The various Bonneville models were already booked out by the time I got there, so I chose the Street Twin to be my first Triumph ride.

The first thing I noticed when I sat on it was how small it is. Its size reminded me of my old Honda CM250 Custom, so I expected it to share the little Honda's good handling characteristics due to its light weight. The controls are simple and basic, "Just the facts, ma'am," as Joe Friday would say. A single round speedometer is the only instrumentation, but it includes indicator lights and a small LCD screen to tell you everything you need to know.

What my old Honda didn't have, though, was a 900 cc parallel-twin engine, which got a nice power boost to 64 hp and 59 lb-ft of torque to its 900 cc engine for this year. Not having ridden any Triumph before, I had no frame of reference to tell if this was an improvement over the previous model, but it sounded fun.

Speaking of sound, when I fired up the engine the deep throaty exhaust note really appealed to me. It was sporty but not too loud, and certainly not the scream of a high-revving sportbike. There's really nothing overtly sporty about the Street Twin at all, but that exhaust note was music to my ears.

Get it out on the road, and despite its classic appearance, modern performance is there. The bike's size and light weight do work in favor of its handling and braking, but modern suspension and brakes help a great deal as well. The engine, in its present form, is the perfect match to this bike. It surprised me with how quickly it took off, and how well it got up hills without needing to downshift and rev it out. The exhaust note encouraged me to get on the gas a bit more than I needed to, just to hear it more. Our demo ride sometimes took a "spirited" pace, and at those times I found the Street Twin to be an extremely willing dance partner, doing whatever I wanted without any of the drama, quirks, or features of the classic motorcycle it looked like. It was deceptively quick in a straight line as well.

Finally, I understand the appeal of Triumphs. Bikes like these are throwbacks to classic styling in a vaguely similar way as Harley-Davidson, but they are far more performance-oriented. Like the Millennium Falcon, she may not look like much, but she's got it where it counts, kid. It's the classic formula of a Shelby Cobra: a small British vehicle with a powerful engine shoehorned into it. In this case, Triumph did the shoehorning themselves, and it works extremely well.

Over the course of the day, I noticed a lot of women trying out the Street Twin. Its smaller size will certainly appeal to anyone of smaller stature, regardless of gender. With its significant horsepower, I probably wouldn't recommend it as a beginner bike, but it would make an excellent bike to move up to, particularly for anyone who wants a faster bike but not necessarily a larger one. I'm exactly six feet tall, and I thoroughly enjoyed the Street Twin, too. I might get a little cramped after a couple of hours, but as long as I'm not planning to spend all day on the bike, it would work for me and keep me thoroughly entertained.

I did get to try a Speed Twin as well. On paper, it's a Street Twin with Triumph's 1,200 cc twin instead of the Street Twin's 900 cc powerplant. Sabrina will be getting her hands on one for a thorough review, so I'll let her tell you all about it. I'll just say that after trying both, I actually preferred the less powerful Street Twin. Everything about the bike—the power, the handling, the brakes—seemed perfectly balanced to me. I didn't meld with the Speed Twin as well. They are both excellent bikes, though. I would recommend that anyone interested in either of them should definitely try both, then choose whichever one you like best. You won't go wrong either way, but the $9,300 Street Twin would be my choice.