Leasing and Lower Prices: The Can-Am Strategy of Affordability 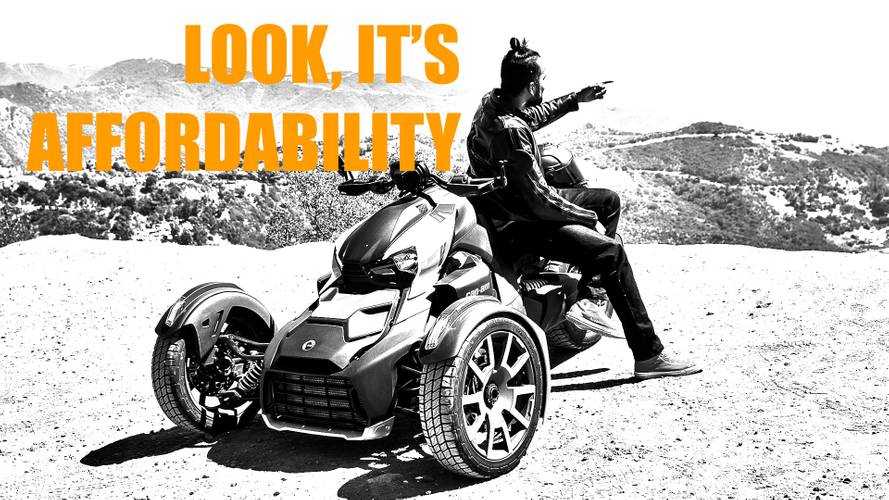 At the launch event of the new Can-Am Ryker, the company announced that for the first time in the on-road powersports space, that they would be offering an OEM backed leasing option. Along with that news, they dropped a quiet bombshell: dramatically lower prices on the Spyder lineup.

Make it So, Number One: Can-Am Releases the All New Ryker

With a starting MSRP of $8,499, the recently announced 2019 Ryker is already the least expensive on-road three-wheeled vehicle on the market right now.

To make it even more accessible, the highlight number being thrown around right now is a payment of $149 per month on a 36 month lease term. There’s a downpayment amount of under $1,000 on that. But as Can-Am puts it the exact terms and amounts will be “determined by Roadrunner credit underwriting. Will vary based on customer credit qualifications.”

And that’s who will be underwriting the first-ever OEM leasing program in the on-road powersports game, Roadrunner Financial. A firm best known for its financial offerings in the powersports industry.

Can-Am will be offering Rykers on 24, 36, and 48 month lease terms. Leasing options will begin a staggered national roll out on November 1st, beginning in the South East. It will available through all dealers by 2019 with the exception of ones in Hawaii and Alaska.

The “price repositioning” (as Can-Am calls it) of the Spyder lineup correlates to what the company says is a massive demand for their trikes in the used vehicle space. A whopping 63% of Spyders sold last year were used, prompting the company reevaluate their current pricing strategy.

Upon close examination of the price drops between US and Canadian markets, the lower prices are noticeably significant for US customers. Which one would think to be strange, since Can-Am (and parent BRP) is a Canadian company, and the USD sits higher than the CAD. However, it’s the parity in exchange rates that has seemingly helped fuel lower pricing for the US market. To be clear, that parity stretches back over four years now when the USD was at about par with the CAD before climbing to $1.20+ levels by early 2015. So why did Can-Am wait a few years to adjust pricing?

While this may be a longer story for another day, it’s food for thought that had us wondering over here at RideApart.