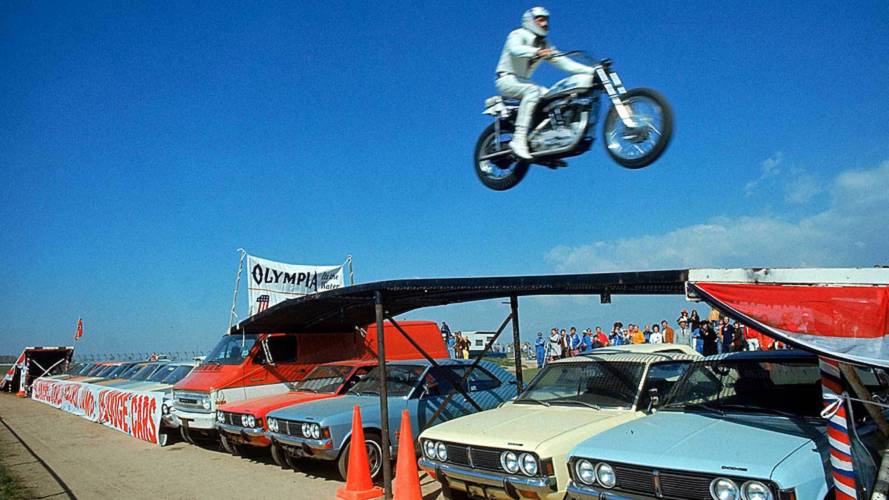 Evel Knievel was everywhere in the 70s, from your television set to kids' lunch boxes. He even had a huge line of very, very cool toys.

From action figures to playsets to plastic models, there was something Evel for every kid in the 70s

If you didn't live through the 70s, it's hard to explain just how big a deal Evel Knievel was. One of the finest daredevils to ever live, Knievel was a consummate showman and the king of low-rent spectacle. He was also super danger prone and had some spectacularly gruesome crashes. He was a real PT Barnum kind of character who knew how to appeal to Americans' love of danger and trashy entertainment, and for his efforts he was rewarded with massive fame and a pretty lucrative career throughout the disco decade.

One mark of his wild popularity was a long-running line of licensed Evel Knievel toys put out by New Jersey's Ideal Toys. Starting in 1973 with the iconic Stunt Cycle Set, Ideal made a slew of fantastic toys bearing the King of Daredevil's likeness. They were huge with little boys of my generation, and every 70s kid had at least one Evel Knievel toy in his toybox.

I bring all this up because just this last weekend, on July 8, 2018, our pal Travis Pastrana undertook to recreate three of Evel's most famous jumps—over 140 crushed cars, over a bunch of buses, and over the fountain at Ceasar's Palace in Las Vegas, Nevada. So, since everyone's talking about Travis and good old Evel, I figured this'd be a good chance to talk about a part of Knievel's legacy that a lot of people tend to sleep on. Let's check out some of the raddest toys in the Evel Knievel collection, shall we?

A later issue of the Stunt Cycle after Ideal cut out the chrome.

This was the toy that started it all, and the one that damn near every boy born between '69 and '79 had in his toy box. First released in 1973, the set contained three pieces—the cycle, the energizer, and Evel himself.

The cycle was a surprisingly good replica of Evel's tricked out XR750 stunt bike. Each bike was powered by Ideal's gyro powered motor, which had failed already in a handful of other projects before Ideal put it in a motorcycle and slapped Evel's name on it. The first generation toys had a sprung front end and a lot of chromed and painted parts, which made them pretty nice. Over the years, Ideal cut down on the chrome and paint to save costs, but the bikes maintained their solid sculpt.

The energizer was a big plastic bit with a crank on one side that powered up the bike's gyro motor. You just set your bike in the energizer, cranked it up (I assume we can all hear that noise now in our heads), and the bike would fly out of its own accord to perform death-defying stunts. Or, you know, fall over in a few feet right before it went over your meticulously plywood and brick ramp. The cool thing about the energizer was that all the successive Evel Knievel toy bikes (and things like the funny car and crash car) were powered the same way, so you could fit everything Ideal released into your energizer for more hair raising fun.

All revved up and ready to go.

Then there's Evel. The Evel Knievel action figures were about six inches tall with bendy, wire-skeleton bodies and vinyl heads. They were dressed in the man's trademark white stars and stripes jumpsuit, came with a helmet, and the head sculpt was surprisingly accurate for a toy from the early-70s. There were even a selection of little outfits you could dress him up in, including an incongruous "arctic adventure" set complete with a hunting rifle and an M-16 for some reason. These are vanishingly rare these days, though.

There's just so much here!

Released not long after the Stunt Cycle in '73, the Scramble Van was a huge hit. Basically a rolling workshop and stunt show, this playset featured everything Evel needed to take his show on the road. The van itself is more of a box truck or delivery van, and has a full-on, star-spangled Evel graphics package. It has a small man-door that opens in the side, and the back gate flips up to reveal a slide-out workshop area.

While the Scramble Van didn't come with an Evel action figure or a bike, it did come with a ton of play accessories. There was a big old ramp you could use for jumping over the van, a tool box with a bunch of little tools in it, Evel's chair, his coffee pot, a trailer for hauling bikes, and much, much more. Listing everything here would be kind of a fool's errand, so I found you this video of a very nice Englishman going through the whole set piece by piece.

A shot from the Ideal Toys catalog for 1973. Peep that cool workshop decal.

Fun for the whole family!

If you were a kid in the mid-70s and you'd had your fill of Evel Knievel toys and playsets you could also get yourself an Evel Knievel board game. Released in 1974, the Evel Knievel Stunt Game was a battery operated board game wherein players took turns setting up and successfully executing death-defying stunts. A player earned a trophy for every successful stunt, and the player with the most trophies at the end of the game won.

As you can see from the commercial above, the game consists of a square board with a round play field printed on it. A big motor with a rotating arm sits in the center of the board and moves the bike around the stunt track. There are two tracks—inner and outer—and the bike can be adjusted from one or another to change the game's difficulty. Now, I've never played the game so I don't have a lot of insight into it. I did, however, find a pretty interesting instructional video for you to check out below. It's definitely worth your ten minutes.

10-4 good buddy, there's a bear in the air on the superslab.

Released in 1977, the CB van perfectly captured the late-70s zeitgeist by combining three of the decade's most popular cultural touchstones—custom vans, CB radios, and Evel Knievel. The toy was peak 70s vannin' scene. Sort of an amalgam of the Dodge Tradesman and the Ford Econoline, it had side pipes, fat white wall tires, bubble windows—all the goods. It also had an extremely post-bicentennial, patriotic, Evel-themed graphics package courtesy of a pretty comprehensive decal sheet.

While it didn't come with an Evel action figure—Ideal figured you'd have one already by this point, apparently—it did come with some pretty great accessories and features. The van's sides aft of the doors swung up to open and the driver's door opened and closed so you could get one of your Evel action figures in there. It had its own ramp, a swiveling driver's seat, secret storage compartment, and a bike carrier that clipped on the read bumper so you could haul around one of the many Evel Knievel stunt bikes you already owned. Pretty snazzy.

The CB Van's real party trick was the built-in, battery operated, CB voice box. With just a push of the cab-mounted button you could hear Evel himself talking to his good buddies on the CB. There were six separate phrases that repeated with each push of the button. While it didn't actually have a faux CB in it with a real mic like a lot of the era's toys, it was still enough to give an illusion of Evel cruising down the superslab chatting with all kinds of drivers on his way to a dangerous stunt.

There's a lot going on here.

This is probably the weirdest toy issued in a toy line with a lot of weird-ass toys in it. Released in 1976, Skull Canyon was a pretty sizeable playset with an extremely weird voodoo/sasquatch theme. It came with a green molded canyon, some trees with skulls on, a handful of various sized boulders, some voodoo signs, a ramp-shaped stack of logs, and the aforementioned sasquatch. The deal was you filled the canyon with the boulders, used the logs as a ramp for Evel, and smashed him through as the sasquatch menaced him from atop the canyon.

There's not much to it, but it did make for an interesting addition to the small-scale toy stunt show that kids could set up with the other toys. Check out the Skull Canyon commercial below for some hair-raising action shots.

So there you have it, a collection of extremely rad Evel Knievel toys. Which ones did you all have? Let's talk about old toys in the comments, shall we?