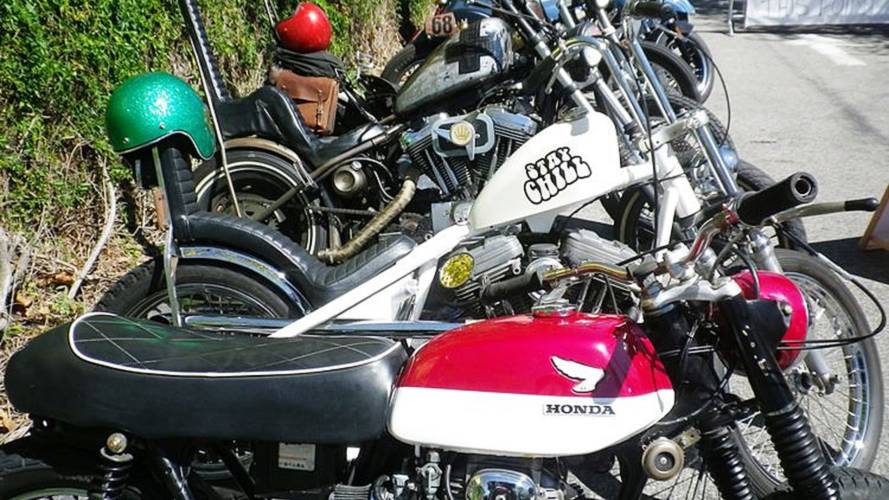 Saturday, September 19th, 2015 marked the 8th annual Venice Vintage Motorcycle Rally in Venice Beach, CA. Even though I'm a little bitter towards the first event to take place the year I moved out of Venice (almost as if they were celebrating the fact), I really don't need much of an excuse to go to the beach on a sunny weekend. So I fired up my slightly shop worn 1972 Honda CB750 cafe racer (badly in need of tires) and cruised down the 405 to the event.

I caught the owner of the KZ1000R resto-mod (pictured above) at a stop light, and he was kind enough to suggest I needed a front tire, to which I responded, "you should see the back."

And speaking of tires, the Bridgestone Spitfire S11 is all-around perfectly serviceable, but I can't see being so proud of them that I paint the letters white on the sidewalls. You guys can have fun playing spot the mods on these two bikes, but they are both tastefully and subtly improved from their stock form.

This appears to be a bone stock Harley Sportster under the retro road-race body work, but the back end sits too low for it to have any real sporting credentials.

This little 90cc Kawasaki is like a cross between a Schwinn Sting Ray and a bosozoku bike. You really can't go wrong when modifying little play bikes like these. They were built by the millions— cheaply and made tough—to be ridden in the dirt by young kids who didn't know the meaning of maintenance. So they are understandably hard to kill.

This is a similar era and style bike; just bone stock, but with a larger motor. These Suzuki TS bikes make great errand runners around town that can still be raced off-road in vintage events, if you don't mind being down a little power.

This little Yamaha also started out as a street legal two-stroke dirt bike, but look at it now: all road-racy with its loaf-of-bread tank. And before you criticize the engineering of the monoshock, you should know that is stock Yamaha from this era.

Going the other way doesn't work out quite so well. I have no idea what the owner of this clean 1980 Honda CB750K was thinking with the knobbies, but I hope it is not the first stage in a conversion of this clean UJM into a Wasteland Weekend, Mad Max-wannabe bike.

All types of dirt bikes were in attendance, both ridden-in and just brought for display. I've said this before—and the Hell On Wheels events are proof—a vintage dirt bike is the cheapest way to get your feet wet riding and racing motorcycles. Though maybe not some of these, more like the early scrambler that Hero Motorcycles brought out.

Other styles of racing were represented there too; from road racing to real early board track bikes like this Indian, which is also from Hero Motorcycles.

And then there's this scooter, which I know nothing about. I didn't even remember to write the brand name down I was so dumbstruck by it.

There were still plenty of Harleys and other non-conventional choppers and bobbers around, though thankfully there were almost none of the overdone show choppers leftover from the TV show mania a few years ago.

And of course, in accordance with the latest craze, there were plenty of cafe racers as well. I tried to only take pictures of the best of these, and the ones that looked more functional than stock. There were plenty of home-built bikes in the parking lot that show just how steep the learning curve can be when you try something for the first time. And with that in mind, I didn't want to take pictures just to make fun of them.

Every year at this event they raffle off a sweet vintage bike. This year it was a really beautiful customized Triumph, dubbed the "Black Knight." You may have missed your chance to win this time, but make a note for next year. You can also look forward to live bands, good food, cold beers and a pinup girl contest. So get hip and get here for the 9th annual event in 2016.