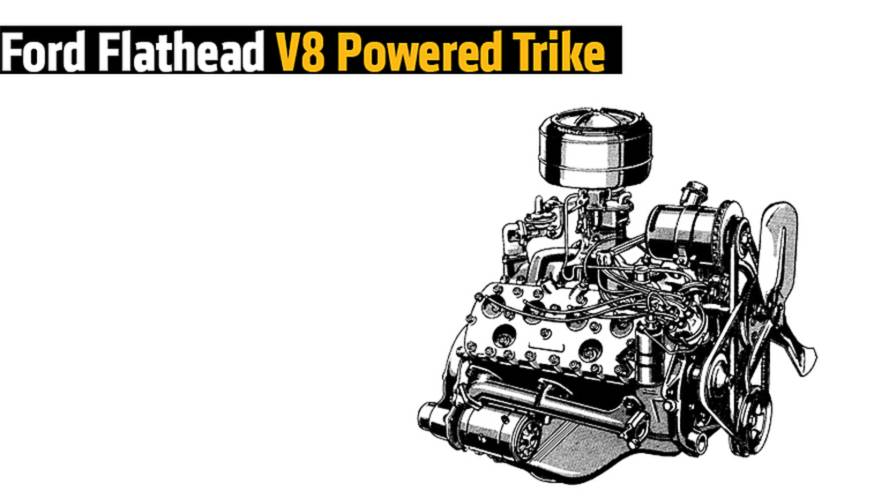 This Ford Flathead V8 is a stroker (meaning the size was increased by adding a longer stroke to the connecting rods). We are not sure of the current cubic inches but an original flathead (depending on the size model) made around 65-85hp. With a longer stroke and a modern Mallory ignition, this trike makes anywhere from 100-150hp. Not breathtaking in the way of power, but then again, that's not really the point.

The bike was built in 2006, featuring a ton of custom goodies including handlebars with integrated throttle cables, and an elegant gas tank. Notice the chrome grill in the center of the tank? It's a cover for the engine's intake.

It looks like they started with a Harley-Davidson Servi-car chassis, which was a service three-wheeler motorcycle used for everything from police officers to funeral homes and ice cream trucks (although, hopefully not two of those jobs for a single trike).

It uses a leaf-spring suspension on the seat, and what looks like a shortened Model A rear axle that is solid mounted to the frame. Luckily they were able to keep reverse gear in the original transmission.

The trike was up for sale on eBay a while back, so hopefully it has a good home with a caring new owner.

It's an interesting looking bike to say the least. To me, it looks hideously ugly, but has so many well constructed pieces like the gas tank, springer front end and the perimeter brakes on the front, it kind of grows on me. What do you think of it? Comment below.