7 Places a Motorcyclist Should Avoid In Traffic 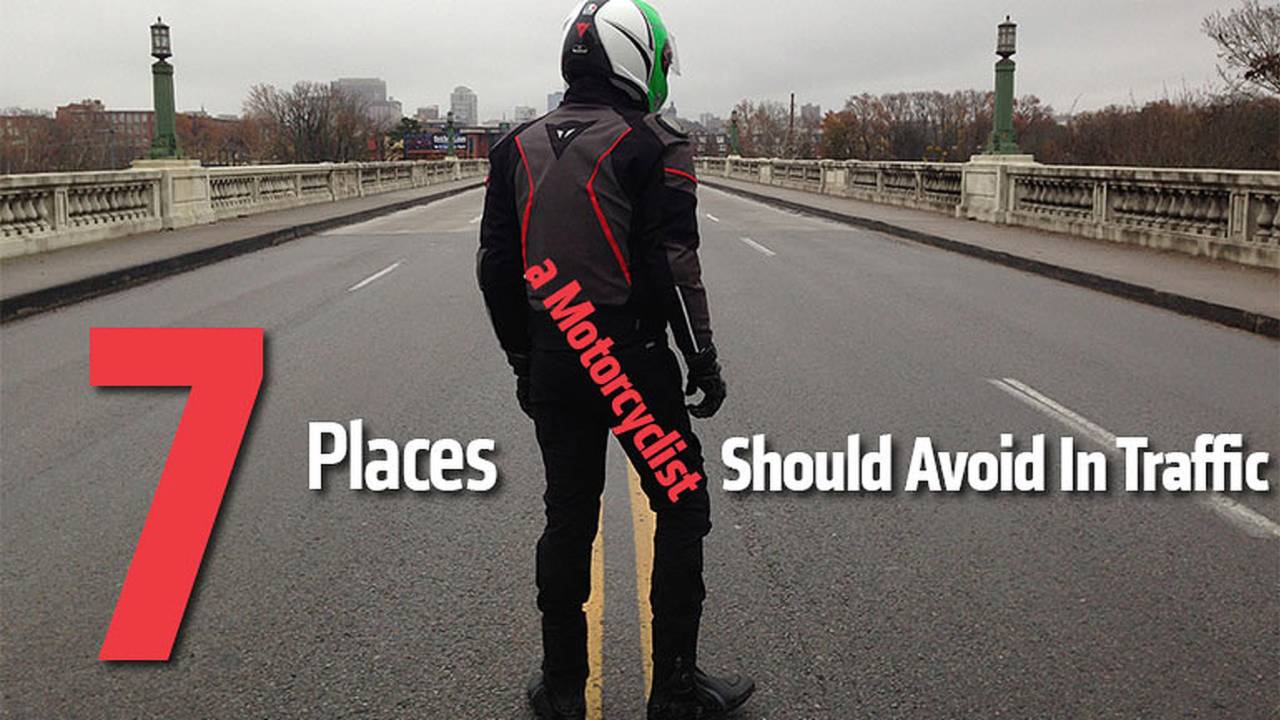 Here are 7 places a motorcyclist should avoid in traffic as a reminder to help keep you safe.

As motorcyclists, we’ve all had a few close calls in traffic. They serve as a reminder to our occasional lapse in vigilance and impart a lasting cognitive reminder from which we can avoid such circumstances in the future. Some of these contextual positions in traffic we know to avoid through education, trial and error, or discernment. Others are harder to spot in the daily fracas of our commute. Yet, more positions we perceive but fail to internalize, instead encountering the same issue over and over but not spotting the common connections. Here are seven places a motorcyclist should avoid in traffic.

Let’s start with the obvious. We already have to contend with automotive drivers perceiving an absence of cars instead of the presence of motorcyclists. The effect seems to be compounded in a car’s blind spot. We are virtually invisible. If you find yourself in the blind spot of a car or large truck, move quickly and safely out of it. The B pillars, passenger seats, and the passengers themselves remove a lot of a driver’s peripheral vision, so assume you are not seen until you are entirely past the car. Also, avoid the common mistake of changing lanes into another car’s blind spot when you make your move.

The Center Of The Lane While Stopped

Disregard our lane-splitting brethren for the moment. What do we do when we are in one of the most vulnerable and statistically alarming situations a motorcyclist can face? We’re stopped with none of the traditional advantages we can employ and the possibility of being suddenly mashed between two much larger vehicles. We can mitigate this by staying to the outside lane and pointing our direction of travel in between cars instead of directly into cars. The theory is if one is rear ended, they will at least be suddenly forced in between the cars to pinball around rather than completely smashed between them.

Passing Without Due Caution On Country Roads

This is true on any road where you have poor sight lines on points of ingress/egress farther up the road. Be cognizant of the distance required to overtake and safely move back into your lane position. Avoid passing or speeding up as a slow vehicle in front of you brakes to make a right turn. Don't assume that just because a vehicle in front of you is braking that it is a good time to pass. That is a common mistake many motorcyclists make and it can have heavy consequences.

Being The First Across The Intersection

This one may come across as overly cautious, but where I live, drivers do not possess a great deal of circumspection. No matter how much you might enjoy that surge of first gear as the light turns green, consider holding back a little at the front of the line. Take an extra second to confirm that everyone who should be stopping is stopping. If you miss that first indication, having cars on one or both sides could provide protection against someone blowing through an intersection.

I’ve been there. You’ve spent hours planning, weeks waiting, and you’re finally in the mountains on your favorite road. You’re just starting to get into a groove only to suddenly find yourself behind some nice people from out of state in a station wagon going exactly 4 mph under the speed limit.  Cue the double yellow lines for the next 14 miles. I’ve certainly been on roads where it seems needless, but far more have them as a legitimate requirement. You could pass them quickly, hoping that no one will be in the opposite lane around that blind corner. You could continue to follow, silently shaking with impotent rage as they pass more opportunities to pull over and wave you by. Or you could pull over, have a breather, enjoy the scenery, and think pleasant thoughts about how to improve technique when you get back on. I vote for the last option because the consequences of what may be around that blind corner are not worth it.

There are a few different preferences on this so I will simply justify mine. When I commuted with a road bicycle, I found that my proximity to cars in the bike lane was inversely proportional to how close and how fast they passed me. The same seems to hold true for motorcycling, where people are more likely to give you a wider berth as they pass if you are closer to the side of the lane. An additional benefit (presumably) is keeping you away from the center of the lane where oils and fluids tend to drop from other vehicles, thus avoiding a decrease in tire traction. In other words, stay close to the line on multiple-lane, one direction roads or highways.

I already mentioned cars making blind turns on country roads, but it happens far too often elsewhere as well. Double safety check and quickly enter turning lanes, as drivers wanting to make a turn opposite you are often looking everywhere but where they need to be. The diagram (above/below) shows what happened to me a few times before I learned to avoid it. Often cars will back up in one lane for a turn leaving the other lane clear. Someone trying to make a left turn (the van) can’t see well past the line of cars. Since it’s hard enough to see a car, a motorcyclist will go unnoticed and the driver guns it to make it to the other side. I had some of my worst near misses from this exact scenario.

What places do you avoid? What indicators do you look for to keep you out of a bad situation?