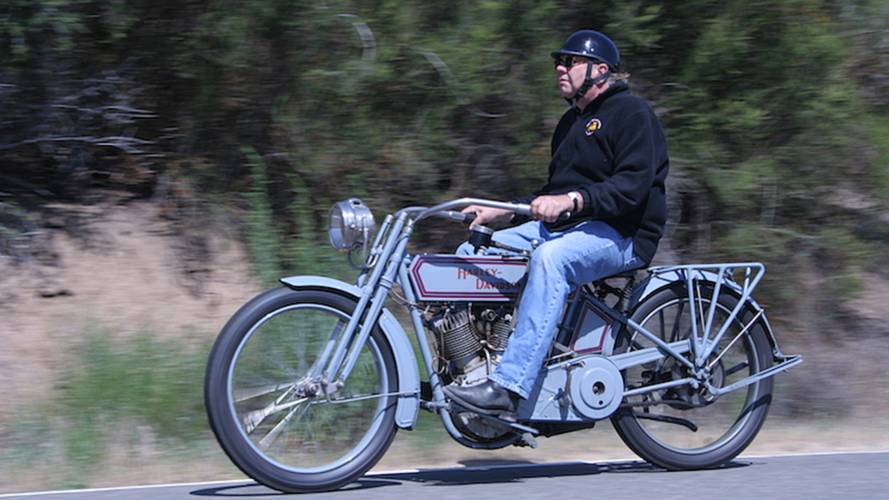 With the unveiling of Harley-Davidson's new Milwaukee-Eight engine this week, RideApart decided to take a look back at the big twins that have come before.

Most of Harley-Davidson’s engine nomenclature over the years has come from nicknames assigned by their customers. The factory designations for the Knucklehead, Panhead and Shovelhead were the EL and FL, the FL again, and the FLH. The Sportster version of the Shovelhead was the XL.

While Harley’s model monikers have derived from the appearance of the valve covers, the original titles came from the valve train configuration itself: Pocket-valve (or IoE, Inlet over Exhaust), F-head, Sidevalve, Flathead, Overhead (OHV) and Overhead Cam (OHC).

By 1929 the pocket-valve period was ending, when Milwaukee accepted the fact that Indian’s flathead engines performed as well or better, and were less expensive to produce (Charles Franklin, who was instrumental in Indian's success, is to be inducted into the AMA Hall of Fame this year). The reliable mills stayed in production for 15 years, powering the road models, sidecar rigs and the Servi-Car three-wheeler, which was produced for a record 42 years.

The transition to overhead valves began in 1936 with the EL, which was eventually dubbed the Knucklehead, still considered by many the best looking Harley engine ever built. The name derived from the appearance of the rocker boxes, which resembled the knuckles of a clenched fist. The performance, needless to say, had some punch.

An example of a Knucklehead

The Panhead (FL, 1948-65) was the next step in engineering efficiency and production economy. The design and manufacturing improvements invoked by World War II brought hydraulic valve lifters, internal oil lines, and aluminum heads. Motorcycling was getting easier for the less mechanically adept, and the reliability factor was rising, as were sales figures. And by 1965 the Panhead had an electric starter. In this case, the nickname came from the valve covers’ resemblance to a cooking implement.

Example of a Panhead

While Milwaukee’s reputation derived almost exclusively from heavyweight V-twins, the growing popularity of lighter sporting models from England in the 1950s got the company's attention. The Shovelhead engine debuted in the Sportster in 1957, a trendy 883cc roadster weighing in at under 500 pounds. With Indian consigned to history four years earlier, Harley was in sole possession of the American hot rod of motorcycles.

The Pan carried on as the big twin motor until 1966, when the Shovel top end, now with an aluminum head, was adapted for the 1200cc Electra Glide. Its final iteration came in 1984 in the last Electra Glide and Super Glide, which also concluded the run of 4-speed chain-drive models. The Shovel marked a return to rocker boxes in lieu of valve covers, and a nod to the Knucklehead style of the 1930s. Without the knuckle, the box looked like a shovel.

The first Evolution engine also appeared in 1984. Having suffered reliability and declining sales under the ownership of American Machine and Foundry, Harley’s very survival was in question. But with a return to private owners, Milwaukee produced a big alloy V-twin with squish-band combustion chambers, flat-top pistons, improved oiling, stronger rods and valve train, smaller and better valves, and computerized ignition. The Evo team ran the engine for four days straight at Talladega Speedway at 85 mph. No failures reported.

The Evolution evolved into the Twin Cam 88 in 1999. Eighty-eight as in cubic inches (1450cc), with a bump in both torque and horsepower, available with either a 40mm carburetor or sequential-port fuel injection. A year later, the 88B appeared in the Softail, with twin counterbalancers to quell vibration and a smoother gearshift mechanism.

In 2001, Milwaukee produced a surprise in their annals of V-twin production with the arrival of the Revolution engine. Based on the Porsche-assisted design of the ill-fated VR-1000 road racer, the liquid-cooled 60-degree twin shared no components with other Harley engines. The 1130cc, four-valve head, wet-sump, 5-speed with a hydraulic clutch appeared in the, uh… revolutionary V-Rod in 2002. As Milwaukee’s first completely new road model in 50 years, the V-Rod was not widely cheered by the Harley faithful.

The Twin Cam 96 arrived in 2007. The Revo-based motor got a stroke increase to bring displacement to 96 cubic inches and slightly higher compression. This was supplanted in in recent years by the Twin Cam 103 and Twin Cam 110, which are still used in Harley-Davidson's cruiser and CVO cruiser models.

*Tod Rafferty is the author of The Complete Harley-Davidson: A Model-by-Model History of the American Motorcycle and Harley-Davidson 100 Years: Celebration of a Legend.