Certain ingredients can make a world of difference. A cake without flour is just a sugary omelet. A mojito minus mint is little more than a spiked Sprite. The same goes for motorcycles. At least that’s what Honda believes with the new CRF300L and CRF300L Rally. While the titular displacement upgrade hogs all the headlines, Team Red also reworked the platform’s entire recipe in 2021 in a way that improves the whole final product.

In addition to more displacement, Honda trimmed the fat from the frame, swingarm, rear sprocket, and rear axle. No component was too insignificant for the diet plan, as Honda also shaved precious grams from the front fender, digital meter, side covers, toolbox, and license hanger. Those weight savings add up to an 11-pound cut for the standard model and a nine-pound drop on the Rally variant.

Despite its trimmer figure, the CRF300L Rally boasts a larger gas tank and broader seat for long stints on the tarmac. Conversely, the CRF300L’s increased suspension travel and ground clearance optimize off-road performance. On top of those model-specific updates, both bikes benefit from a tighter rake, slipper clutch, and HRC-inspired graphics.

Honda hopes the host of revisions make the platform an even better beginner option. After testing the CRF250L Rally in January, 2021, we were curious to find out if they pulled it off. Is the power increase enough? Will the weight loss translate to the trail? Following a full day astride the CRF300L and CRF300L Rally, we found out which new ingredients made a world of difference—and which ones didn’t. 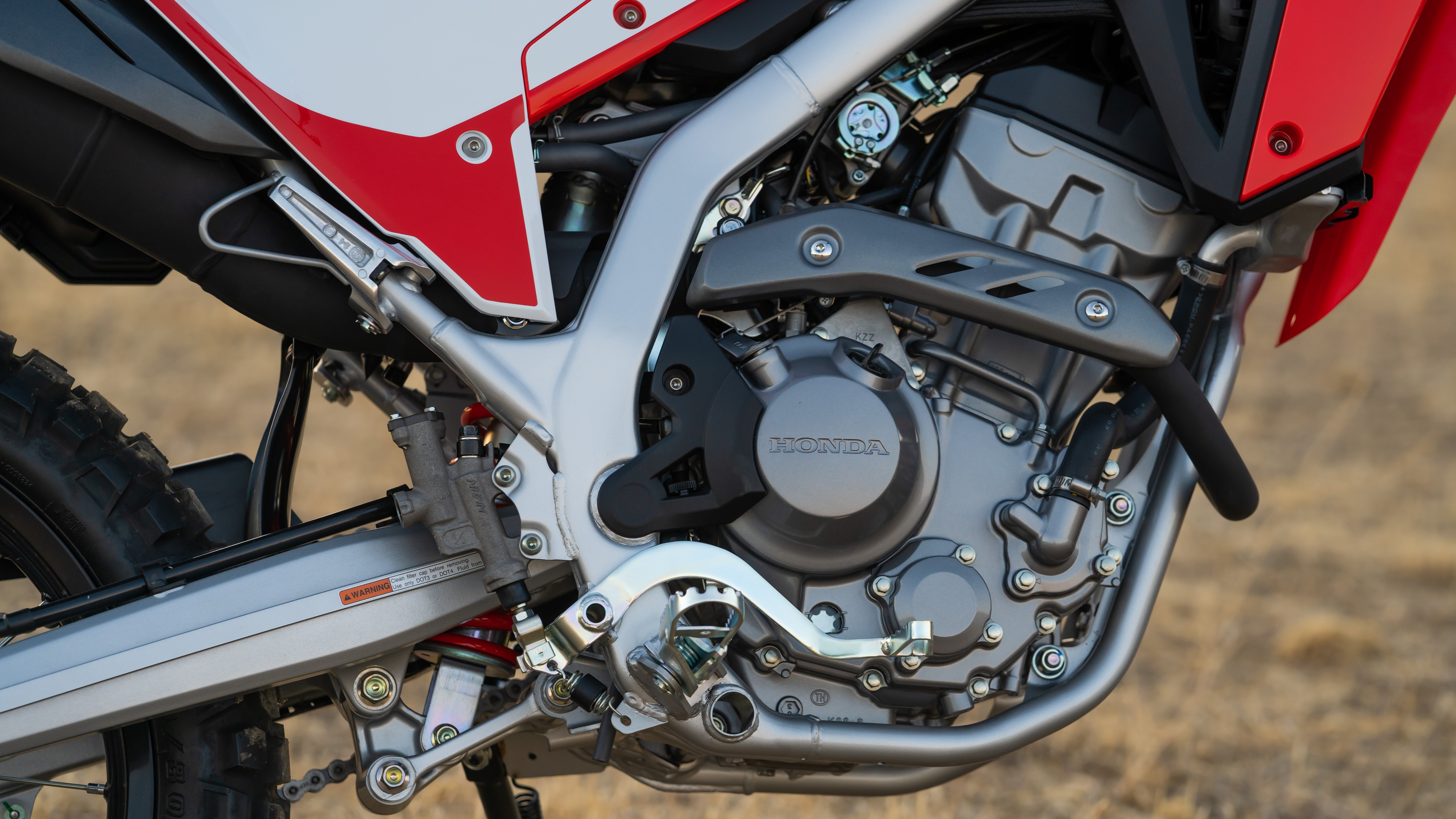 Honda carries over the same DOHC, four-valve, that previously powered the CRF250L, but increases stroke by 8mm (63mm in total). As a result, displacement grows from 249.6cc to 286cc, but the 10.7:1 compression ratio and 76mm bore remain unchanged. Camshaft lift and timing do change, however, helping the thumper go from 24.8 to 27.3 horsepower (at 8,500 rpm).

The torque band sees the most significant gain from the new configuration though, with peak torque jumping from 16.7 lb-ft to 19.6 lb-ft (at 6,500 rpm). The torquey mid-range fared well off-road and on pavement, and should prove more than manageable for ham-fisted neophytes. Of course, extra power is always welcome, but Honda ensures that the displacement bump doesn’t overpower the CRF300L’s balance.

Whether negotiating uphill rock gardens or steering the rear out of a sandy rut, the upgraded mill remained capable through it all. On the tarmac, the extra capacity not only provided extra poke but also made the CRF300L Rally a worthy backroad tourer. Like most thumpers, however, the CRF300L’s engine was susceptible to vibrations in the higher register.

At 7,000 rpm, the wound-up 286cc single shuddered through the bars and pegs. By 8,000 rpm, the tremors were significant enough to prompt upshifts. The CRF300L Rally’s standard handlebar weights and rubber foot peg platforms greatly reduce the effect, but the -focused CRF300L doesn’t benefit from such accommodations. Luckily, sixth gear functions as overdrive, reducing vibes at higher speeds.

At 70 mph in top gear, both models cruise along at 7,000 rpm with only faint vibes coursing through the bars. Those especially averse to the platform’s pulses, fret not. Users can adjust the programmable shift light to suit their preferred shift point. That feature came in handy away from a stop as well, as the CRF300L’s short first gear elicited equally short shifts. No, the CRF isn’t wheelie-happy after the volume increase, but it’s the manner in which the dual-sport lays down the power that’s impressive.

Clutch systems rarely receive the recognition they deserve, but it's hard to overstate the impact of the CRF300L’s new slipper clutch. Operating the previous version was no hard feat, yet the 2021 edition reduces lever resistance by an additional 20 percent. That light pull promoted controlled lever actuation and modulation throughout my time with both models.

Feathering the clutch during uphill climbs or upon corner exit was a predictable affair. Two fingers provided more than enough force, and the slipper always seemed to deliver the appropriate helping of power to the back wheel. That, in turn, will build consistency and confidence in newcomers, which is the CRF300L’s main objective.

On-road, the slipper handled abrupt downshifts with just as much gusto. Banging down one, even two gears, on corner approach never upset the chassis. The rear wheel never chattered or locked. The system does have its limits, though. Descending through the gears too rapidly can reduce the slip effect, but the CRF’s unit isn't made for performance; it's made for beginners—and forgiving their mistakes. The new slipper achieves those ends, no problem.

Off-roaders more skilled than I can even leverage the CRF300L’s smooth downshifts on the , but it’s more than sufficient for its target audience. The slipper’s light lever pull and merciful manners instantly mesh with the platform’s ethos. It backs that up with dependable performance and ease of use. Though Honda spiced up the engine and added a new dimension with the slipper clutch, not all of the brand’s updates were as palatable.

The CRF250L Rally’s suspension was a clear shortcoming when we rode it earlier this year and its successor keeps the same 43mm Showa fork and Pro-Link rear shock. Honda adds .4 inches of travel fore and .6 inches aft, resulting in 10.2 inches of stroke at both ends. Similar measures aren’t applied to the Rally edition, but the front and rear wheel travel already come in at a lofty 10.2 and 10.4 inches, respectively. Ample stroke can’t save the suspension from its biggest flaw, however.

Under-sprung and under-damped, the CRF300L softens jarring ruts on the trail and potholes on the tarmac. By soaking up tougher terrain, the system caters to beginners, but the spongey suspension only benefits the rider at slow speeds. Pick up the pace, and the fork bottoms out regularly. The effect is only amplified on the rebound, where the suspension pogoes after each big hit.

Of course, the CRF300L platform isn’t engineered for hard enduros, but experienced riders may require more support to fully attack the trail. Newer off-roaders will enjoy the forgiving suspension action out of the box, but it doesn’t promote growth with the platform. Once the customer gains enough trail experience, aftermarket suspension or a move to another CRF-badged bike may be in the cards. 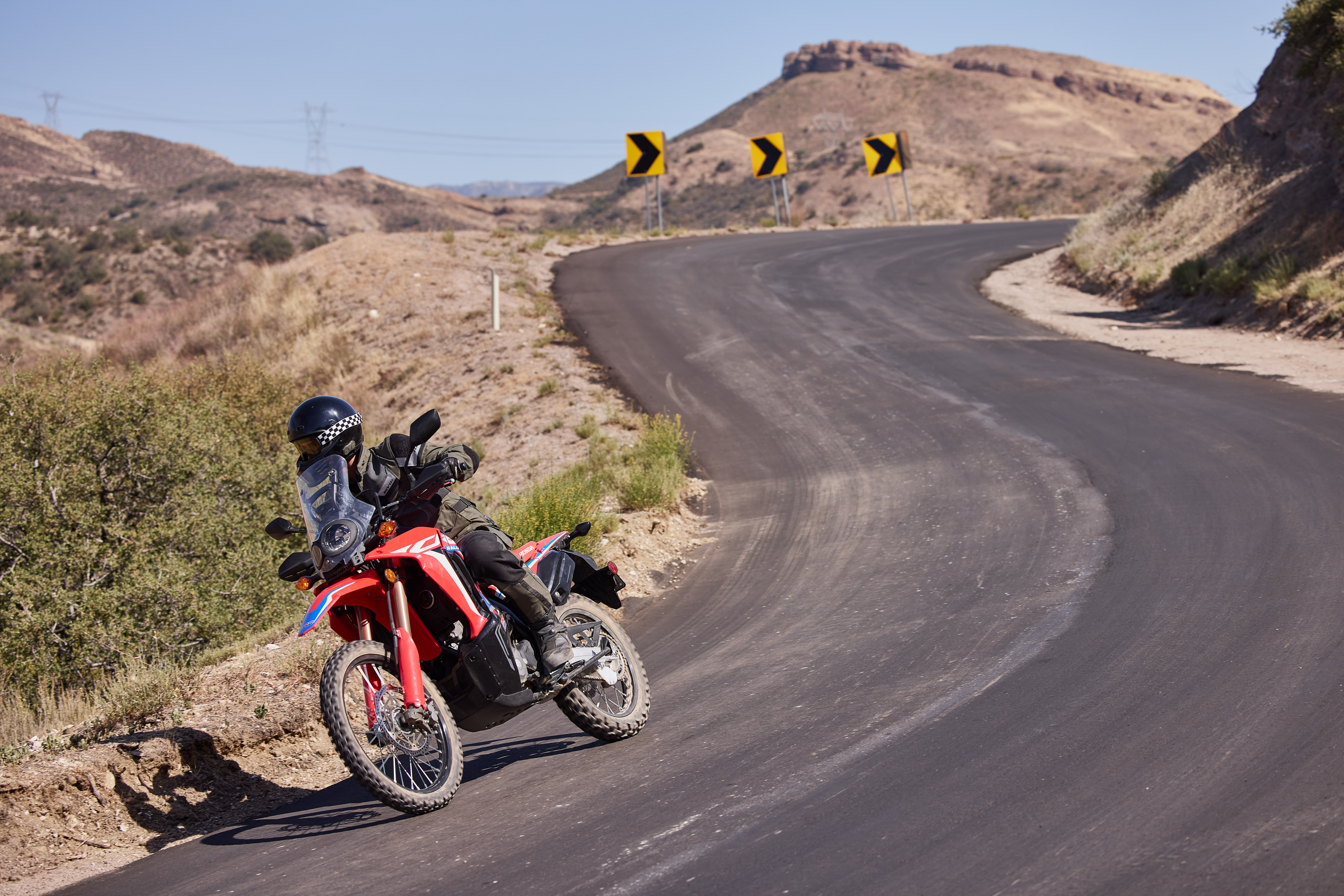 On-road performance isn’t a vast departure either. Yes, the plush ride serves the CRF300L Rally’s touring aspirations, but it also contributes to the vague feedback on twisty canyon roads. A mid-corner buoyancy plagues the CRF300L’s road presence. The suspension is welcoming but it also wallows, and similar to its off-road behavior, doesn’t encourage a lively pace.

We would have loved to see a modicum adjustability in the CRF300L’s suspenders. My 160-pound frame was already pushing the system to its limits. A few clicks of compression and rebound damping would make a world of difference, but non-adjustable componentry doesn’t allow such custom settings. The suspension doesn’t operate in a vacuum, unfortunately, and other elements get muddled as a result.

We have to acknowledge that the budget-conscious model has to stay within set parameters, but we hope an upgrade in this area is in the cards soon. While the suspension didn’t receive enough attention, Honda’s other efforts are greater than the sum of their parts.

To amplify the CRF300L’s off-road prowess, Honda narrows the front section of the seat. The rider’s knees and thighs comfortably slot into the bike’s slimmer midsection and makes inputs easier and more effective. The foot pegs move slightly rearward as well, resulting in a natural reach to the brake pedal and shifter.

Increased rearward handlebar sweep also leaves the elbows at a comfortable height while in the saddle. However, standing on the pegs left my five-foot, 10-inch frame in a slightly hunched posture. Adding a taller riser can quickly remedy the for taller riders, but anyone under five feet, eight inches should fit the CRF300L’s proportions well.

Honda translates the same handlebar and foot peg adjustments to the Rally side too but equips the faired enduro for extended road trips. Along with the previously mentioned bar weights and rubber foot peg platforms, the seat gains a rubber-mounting for improved comfort. The designers also widened the saddle’s width to 7.5 inches for more cockpit comfort.

The broad, 3.4-gallon gas tank meets the knees at a wider angle, delivering a relaxed position for highway jaunts. A rally-inspired fairing provides much more wind protection than the standard trim, but it also throws more air at your head and shoulders. It never became tiresome in my short time with the Rally, but I would recommend a dual-sport with a visor (instead of googles) to reduce wind noise.

While both variants differ in riding position and purpose, both boast a new digital meter. The dash still displays speed and rpm but Honda adds a gear indicator, fuel mileage, and fuel consumption readings. The new unit also includes the aforementioned shift light, which users can easily adjust with one of the meter’s two buttons. It’s simple but effective, and for a beginner, it's just enough information without becoming overwhelming.

At $5,249 for the base model and $5,999 for the Rally variant, the CRF300L remains a great first dual-sport for an affordable price point. Only $100 over the 2020 CRF250L and $50 more than the 2020 CRF250L Rally, Honda’s upgrades more than justify the new MSRP. Customers can tack on switchable (rear only) for an additional $300; an option that newer riders should certainly consider.

From the extra power to the compliant clutch, from the trimmed figure to the lower wet weight, the CRF300L is a marked improvement over its predecessor. The suspension leaves something to be desired, but it performs sufficiently within its limits. Aspiring off-roaders should revel in the model’s mild manners and instant accessibility. Those living near the trailhead should opt for the standard trim while city dwellers can leverage the Rally’s highway worthiness.

Honda not only altered the CRF250L’s recipe with sensible revisions but kept its replacement agreeable in the process. Despite the CRF300L’s apparent room for improvement, its new ingredients do make a world of difference.

All The New Bikes Under 500cc We’re Expecting In 2021
9 Things I Wish I'd Known About Riding
++
Got a tip for us? Email: tips@rideapart.com